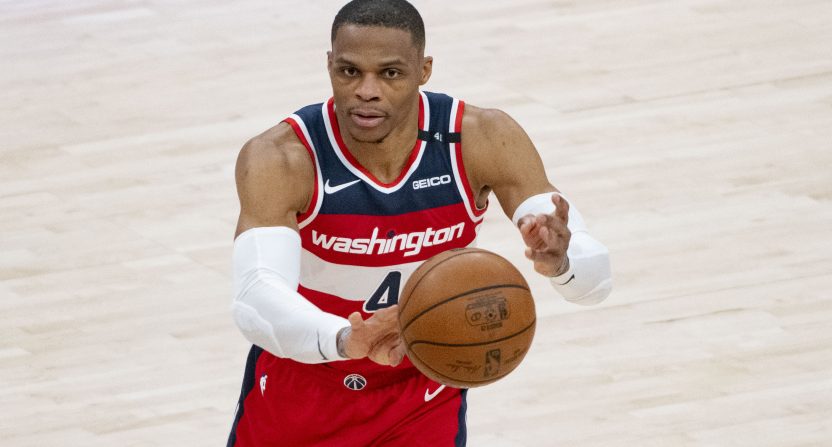 There isn’t anyone in the NBA that plays quite like Russell Westbrook. This season has been a tour de force of pure, unbridled Westbrook. He’s playing like he’s been freed from one year of being James Harden’s co-star, charging up and down the court, and racking up ridiculous stats as a statement to the rest of the league. For the fourth time in five years, he’s averaging a triple-double, and he looks likely to lead the league in assists for the third time.

It’s those stats, and particularly the passing, that has drawn the most attention. Westbrook racked up 24 assists in the Wizards’ most recent game, a 154-141 win over the injury-addled Indiana Pacers. He takes heat for being a stat-padder, a player who seeks out assists and rebounds at the expense of winning. But with the Wizards 13-3 over their last 16 games, Westbrook is clearly doing something right.

It’s worth paying attention to why he has been one of the best shot-creators in the game. As ESPN analytics guru Kirk Goldsberry wrote this week, Westbrook creates 31.6 points per game for Washington with his assists, far and away the best in the league, and his Wizards teammates have an eFG% of 57.8 on potential Westbrook assists, much better than their overall 53.0 figure as a team.

At this stage of his career, he’s everything that you’d expect a high-volume assist guy to be. He’s always been a smart and perceptive passer. Now, he plays on a bad team for a friendly coach (Scott Brooks) who gives him free reign. Westbrook’s speed and strength are still there, but his leaping ability has diminished. He can beat defenders off the dribble, draw help near the rim, and get out in transition, but he can’t consistently get buckets at the hoop, so he has no choice but to pass. That leads to a lot of assists.

His best asset as a passer is his timing. Like the great point guards, he knows how to find shooters in rhythm and big men in position near the basket. He delivers passes on time, before the advantage disappears. Watch how he wastes no time getting the ball into the post when Robin Lopez creates an opening:

It’s simple, but this kind of pass is how you get 11 assists every night. Here’s another quick decision, capitalizing on Andre Drummond falling asleep:

Note that Westbrook is already rifling the ball toward Alex Len even before Len has finished setting a screen on Kentavious Caldwell-Pope. As open as Len was in that clip, Anthony Davis would have likely closed that gap fast if Westbrook had waited much longer.

There aren’t many great shooters in Washington outside of Bradley Beal and Davis Bertans, but there are a plethora of useful big men now with Lopez surging and Daniel Gafford arriving at the trade deadline. Westbrook has been able to elevate his teammates by capitalizing on defensive mistakes, hitting them in rhythm (Rui Hachimura has benefited from this), and running on the break.

As ever, Westbrook is a major threat in transition. His blazing speed hasn’t gone away. He knows what the right shots are and how to generate them. Just watch him generate this dunk for Gafford:

That’s an advantageous situation for the offense, but getting the right basket is easier said than done. Westbrook could’ve gone to the rim and tried to draw contact, or even kicked to a shooter, but he senses Gafford running behind him and takes one extra dribble in the paint. That dribble pushes the defender back and gives Gafford an easy dunk.

Westbrook, more than anything else, excels in semi-transition. He’s an expert at pushing the offense and probing for weaknesses in a defense that may not have matched up yet. Here, the Cavaliers were back on defense, but Westbrook knows that initiating offense quickly is a great way to generate good looks:

This is high-level shot-creation as well as high-level assist-collecting. Westbrook, being a master of both, wades into the paint to draw a checked-out Kevin Love and a confused Jarrett Allen toward both the ball and a potentially open Anthony Gill. The pass leads Len nicely to the hoop.

When things are chaotic, Westbrook knows what to do. A longtime agent of chaos himself, he anticipates when players are open and has the wherewithal to hit them in stride:

He had only taken two dribbles after he had gotten this rebound when he fired a lefty bullet into a wide open Len. Westbrook doesn’t always get credit for his anticipatory passing, but he sees things others don’t.

You don’t rack up as many assists as Westbrook does without seeing tiny gaps like this:

He fired this pass through about four Pacers! And that’s 6’3″ Bradley Beal standing near the hoop, not exactly the biggest target on an NBA court. That not only takes exceptional pass accuracy, but also awareness to generate it. Notice that when he gets the ball from Lopez, he eyes Beal near the hoop and takes two dribbles to the right, drawing Doug McDermott toward the sideline and away from Beal. Those two dribbles gave him the necessary angle to hit Beal.

The list of players who can make passes like that is not long. Westbrook plays with his head up and an acute sense of where players will be open, an awareness that has developed over years of being an NBA star.

It’s hard to deny at this point that Westbrook is one of the best passers in the league. He doesn’t control games, or make magic like the above, as often as the league’s absolute best (LeBron James, Nikola Jokic, Chris Paul), but he’s a high-usage player that’s constantly looking to put players in position to score. He still has the leverage to draw defenders.

The criticism, as always, is whether Westbrook’s style leads to winning. In the past month, it’s rocketed the Wizards into play-in contention. They will in all likelihood finish at least 10th, securing a spot in the play-in round, despite a weak and injury-affected roster around Westbrook and Beal.

That doesn’t mean Westbrook is an All-Star level player anymore, or on any list of the top guards in the league. He can go stretches being a negative, even. He doesn’t play much defense. He turns the ball as frequently as ever (4.9 per game, by far the most in the NBA).

His shooting numbers are atrocious. In a year in which players are shooting at incredible rates, Westbrook continues to brick poorly chosen jumpers. His effective field goal percentage of 47.4 percent is six below the league average of 53.8 percent. His eFG% is seventh-worst among 125 qualified players. That’s because neither his midrange jumper nor his three-pointer is falling, and he’s getting to the rim far less than he used to.

The missed shots, the turnovers, and the defense really hurt. And the passing, while clearly effective, isn’t on the level of other ball-dominant stars, even if Westbrook has the numbers.

This all makes Westbrook a complicated player. No one else is remotely like Westbrook in terms of play style or output. But for now, with Beal and Westbrook leading the way, the Wizards will play big games coming up soon, and the assists will keep rolling in.