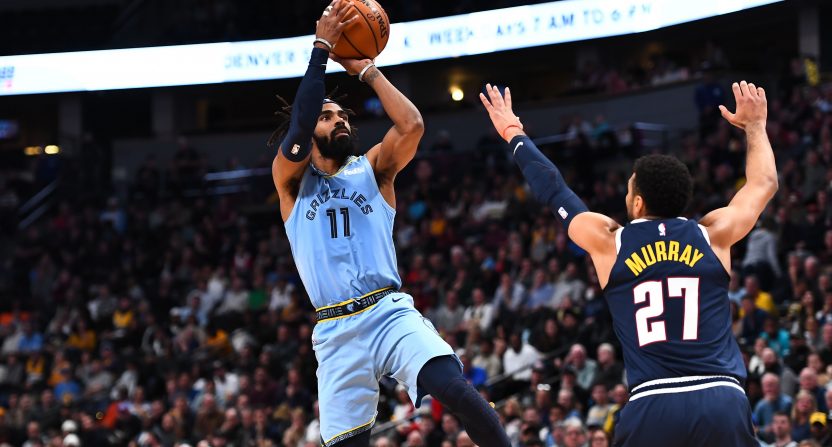 After the Memphis Grizzlies’ 107-103 road win against the Pelicans last Friday night, Kyle Anderson told the Grizzlies’ local broadcast about his team’s “grit and grind” basketball philosophy, and how it was defense spurring the victory.

“(We wanted to) keep these guys under a certain amount, not let them get to their season average,” Anderson told sideline reporter Rob Fischer.

They accomplished their goal: Memphis held the Pelicans to nearly 15 points lower than their season average.

The Grizzlies sit at 15-11 on the season, good for the sixth in the Western Conference. Coinciding with early flops out of Utah, Houston, and San Antonio, Memphis have thrown a wrench into a complicated playoff conversation. They’ve played this well in spite of facing the league’s eighth-hardest strength of schedule, per ESPN.

Coach JB Bickerstaff, hired in May, emphasized the return of gritty and tenacious basketball, which Anderson casually mentioned after that Pelicans win. The Grizzlies want to make up for what they lack in superstar talent and depth with defensive nuance and machine-like offensive efficiency.

Their recent history is rooted in grinding defensively. Their 2012-13 team was the last NBA squad to give up fewer than 90 points per game, and they were featured in NBA 2K18 for that accomplishment. Alongside the likes of Zach Randolph and Tony Allen, Marc Gasol and Mike Conley comprised the core of that team, with Gasol winning Defensive Player of the Year that season.

Gasol and Conley, now 33 and 31, still form the engine in Memphis. Gasol has unexpectedly emerged as a top DPOY contender again this year as the Grizzlies rank second in the league in points allowed per game. A year after injuries to Conley led to a tanky campaign, Memphis are ably navigating a brutal conference. A playoff berth looms as an enticing possibility.

The difference between this year’s team and the one from five years ago? Playing defense is much different, and likely more difficult. Memphis led the league by giving up only 89.3 points per game in 2012-13. This year, they’re second while conceding 102.4 points per game. NBA offenses are scorching opponents across the board.

Like the NFL, basketball defenses are in damage control mode: Analytics-driven offensive improvements have yet to face a true defensive counter. The Grizzlies aren’t doing anything revolutionary, but they’re finding as much defensive success as any other team in the league, alongside the Pacers, Thunder and the always-stingy Jazz.

Personnel surely helps. Gasol is a smart, rangy center with an understanding of defensive reads and subtle footwork that puts him in a position to dominate the middle of the court with length. Conley hounds opposing point guards. Anderson and fellow wing Garrett Temple can switch across multiple positions.

At some point they’ll have to adapt on offense, to some extent. Calling their style regressive feels disingenuous, but their conservative and methodical nature doesn’t fit what the rest of the NBA is doing. They’re in the bottom 10 in the NBA in three-point frequency, and they’re 26th in made threes.

The offense runs through Gasol pivoting around the block and Conley hustling to the hoop. Conley ranks in the top 20 in the league in drives per game, at 13.0, the same as Kawhi Leonard. Anderson and Temple fill gaps and stretch defenses. They keep the machine humming.

Much of what the Grizzlies do revolves around finding looks for Gasol. Having him pop off screens and handoffs is a way for Memphis to find quality looks later in the shot clock. The threat of Gasol’s shooting is a way for the Grizzlies to create space elsewhere on the court. Other teams do that by shooting a ton of threes. Memphis force help off the wings and open cutting lanes with the constant danger provided by their center.

Gasol is fifth among qualified players in catch and shoot points per game — behind Klay Thompson, Steph Curry, Paul George and Justin Holiday(!). He’s draining 40 percent of his 3s while shooting 4.3 per game. His true shooting percentage of 56.3 is his best since the 2010-11 season.

Relying on this slow, playbook-focused offense could pose problems in the postseason if they manage to survive the regular season. Already, they’ve struggled in crunch time. Memphis’ -0.8 net rating in clutch minutes ranks 24th in the NBA, the lowest of any current playoff team.

They could ride that suffocating defense to success later in the season. They allow the right types of shots and are switch-y enough to survive teams looking to exploit that. Matching up with the best non-Warriors Western Conference teams shouldn’t be too much of an issue.

Rookie Jaren Jackson Jr. is playing heavy minutes through all of this. Memphis’ defensive success comes despite relying heavily on Jackson’s ability to adjust on the fly to NBA basketball.

He’s handled it well: Each of the NBA’s four best defensive ratings among pairs include Jackson — with Gasol, Conley, Anderson and Temple. Those pairs have each played more than 400 minutes together and allowed 96.0 points or less per 100 minutes. Jackson’s defense hasn’t been perfect, but the 19-year-old is a core part of Memphis’ success.

Jackson looks like the future. That’s the difference between this year’s Memphis team and prior ones: They have some baseline from which to build. Conley and Gasol are aging, and the Grizzlies will continue to face questions surrounding the rest of the core. But Jackson is good, and other young pieces — Dillon Brooks and Wayne Selden, for example — will emerge.

An unlikely playoff appearance out of an impossible conference would be satisfying vindication. Memphis’ identity — reversing NBA trends and going tough and conservative on both ends — is a way of overcoming the inherent disadvantages they face. The Grizzlies aren’t attracting superstars, and they’ve done well to avoid tanking, outside of last season’s injury-induced losing. This style is a way for them to stay relevant.

They have the foundation, and the buy-in from players. Their roster is filled with guys who can function at the NBA level; not every team can say that — the Rockets would surely pay a high price for one of the Grizzlies’ numerous effective wings.

Lasting all the way into late April and May would be a difficult task. It’s no guarantee that anything Memphis are doing would translate to an elite level of winning games in 2018, or that they’ll be able to replace the production of Conley and Gasol as they age out of All-Star caliber play.

But the Grizzlies have a legitimate identity and a direction. They’re already being rewarded with nice wins and early contention. Young players have looked good in this system. The “grit and grind” philosophy is helping the Grizzlies maintain NBA relevancy.