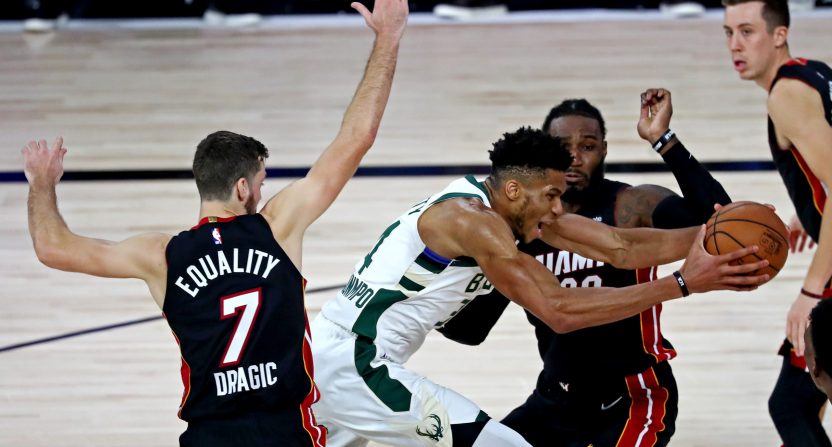 As a franchise, the Milwaukee Bucks are the team with the most to play for in the NBA postseason. Giannis Antetokounmpo’s free agency is very publicly on the horizon. Their supporting cast, good enough to go 56-17 in the truncated regular season, is close to as good as it’s going to get around Giannis. A playoff failure would be intensely damaging to their championship window.

They’re capitulating in a major way right now. They’re down 3-0 in their second-round series against the Miami Heat, finding in the Heat a team perfectly assembled to give them trouble. Giannis is hearing all the criticism bound to come for a superstar who hasn’t figured out the playoffs yet.

Why have the Heat figured the Bucks out so well? Let’s examine a couple of the most notable reasons why:

The Heat play each of Tyler Herro, Kendrick Nunn, and Duncan Robinson for significant minutes and still have been able to shutter the Bucks’ offense. Those three players try hard, but they’re short, young, and theoretically exploitable. Milwaukee has rarely taken advantage, in part because of Miami’s cohesive system and because of the other players Erik Spoelstra has at his disposal.

Multiple players can guard Giannis without being bulldozed. Jae Crowder and Bam Adebayo have had the task the most, and their strong, low base makes it difficult for Giannis to walk to the rim. Jimmy Butler can switch on without too much trouble. Andre Iguodala and Derrick Jones Jr. are available. No one is going to guard him consistently without help, but they add up to form a brick wall, while also conceding little to other players.

Miami is willing to switch a number of different actions, and frequently pulls out wrinkles that stagnate the Bucks’ offense. They may trap Khris Middleton, forcing Bucks role players to make plays off the dribble. They run shooters off the three-point line and force Milwaukee to beat a scrambling Heat defense, something they often have trouble doing.

Their aggressiveness puts the onus on Giannis and other ball-handlers (usually Middleton and Eric Bledsoe) to make perfect decisions every time. For example, the Bucks’ use of Giannis as a screener in a pick-and-roll was one of their most effective plays in the regular season. The Heat are perfectly willing to have the defender guarding a corner shooter sag off to prevent an easy dish to Giannis. Their defenders are smart and athletic enough to cover for themselves:

The paint becomes so crowded that Bledsoe has to think quickly in a frantic situation. Butler is helping out of the corner to prevent a dish to Giannis. Adebayo is denying a Bledsoe drive. Crowder is lurching in as a helper off Lopez. Bledsoe realizes that Wesley Matthews should be open in the corner, and tries a rushed pass. Butler, reading it immediately, intercepts. There goes another crucial fourth-quarter possession.

Bledsoe has struggled in the two games he’s played. He’s shooting just 35 percent from the field despite only attempting four threes. His assists are down (just five in the two games), and he hasn’t been the secondary scorer they need. Part of the reason is the Heat’s versatile defense, which protects the rim at a high level and forces Bledsoe into lower-percentage floaters.

Giannis has often found nothing, especially in the fourth quarter.. He has missed most of his outside shots (2-for-13 from three in the series) and has been inexplicably terrible on free throws (54 percent). There have been no easy buckets. Adebayo is strong enough to box him out and take away some of his offensive rebounds and put-backs. Giannis has upped his assists (nine in Game 3), but he isn’t a polished enough passer or ball-handler to take full advantage of the attention talented defenses devote to him.

Butler has been sensational in this series, despite a slow 13-point offensive performance in Game 3. He scored 40 in Game 1 and 30 in Game 3, racking up free throw attempts and finding buckets when his team needs them. This is all in addition to his defensive efforts. He has six steals in the three games and has been particularly effective as a help defender, getting his hands in the lane and preventing the Bucks from generating three-pointers.

The Heat have done a great job of figuring out ways of getting Butler on the ball. The Bucks remain a great rim protecting team, and they have five above-average defenders on the floor most of the game. To combat this, Butler receives the ball in a variety of situations. He makes smart, timely cuts. He screens for a guard and hunts a mismatch. He attacks Middleton in isolation situations, bodying into the lane. He pops up everywhere on the floor, lessening the influence of Giannis’s help defense.

With so much ball-handling, the Heat can make plays all over the floor. Adebayo is a fantastic passing hub. Herro exudes confidence and can disjoint defenses with dribbling and shooting. Goran Dragic continues to play well, initiating the offense and hitting 45 percent from three. When the auxiliary players shoot well (and Crowder, Kelly Olynyk, and Jones Jr. have), the Heat are tough to stop on offense.

Where does this leave the Bucks?

It’s nearly impossible to come back from a 3-0 deficit. We haven’t seen any indications that Milwaukee are figuring things out. This series is all but over, even if the Bucks are able to scratch out a win in Game 5.

Many have complained that Mike Budenholzer hasn’t played his stars enough. They’re right: Giannis and Middleton are averaging only 35 minutes a game, too few when the Bucks are playing such important games. But Middleton is in constant foul trouble, and the Bucks have been considerably better without Giannis on the floor. Astoundingly, they’re -15.8 per 100 possessions with Giannis and plus-7.6 without him in this series. That has obviously been a big problem.

Compounding this, the Bucks have been awful in the fourth quarter, when their best lineups enter the court. In 25 Giannis-Middleton fourth-quarter minutes, the Bucks are -38.2 per 100 possessions, with an offensive rating of just 83.3. The Heat have utterly dominated crunch time.

After the series, autopsies of the Bucks will pour in. The odds that Giannis leaves likely go up after this failure. Milwaukee’s unwillingness to re-sign Malcolm Brogdon in the offseason due to the luxury tax was a brutal example of cheap ownership hurting the team. The criticism that Giannis can’t hack it in the postseason won’t go away.

According to Jon Heyman, the deal will be for three years at $130 million.

According to Jon Heyman, the deal will be for three years at $130 million.