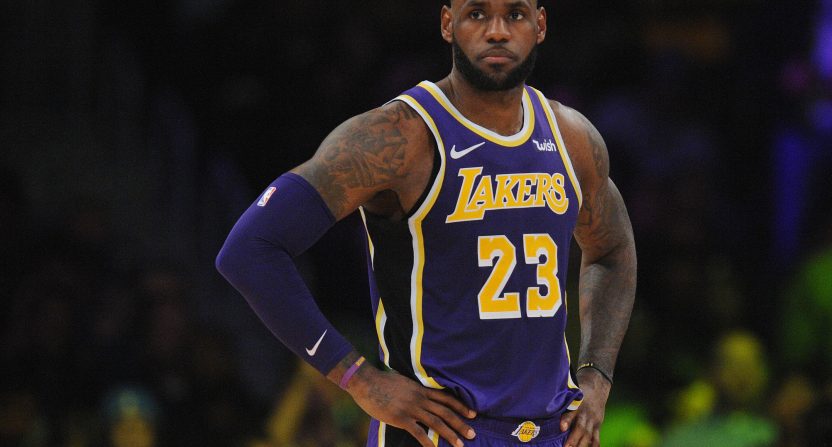 It’s safe to call the Los Angeles Lakers’ 2018-19 season a nightmare. Following a 35-win season, Los Angeles struck it big in free agency, signing superstar LeBron James to a four-year, $154 million contract. The huge move came with increased expectations. Team president Magic Johnson and general manager Rob Pelinka brought in a slew of free agents to surround James and a fairly young team in an effort to turn a lottery team into a playoff contender. Those moves haven’t worked out. The Lakers have won just 30 of 65 games so far, and barring a near-perfect finish to the season, they’ll miss the playoffs for the sixth consecutive season.

Making changes this summer will be important for this team. The Lakers can’t have another wasted season with LeBron. They need to address multiple glaring issues in order to be competitive once again.

First and foremost, James needs a capable roster surrounding him. Johnson and Pelinka made the curious decisions to sign Lance Stephenson, Michael Beasley, Rajon Rondo, and JaVale McGee (the one guy on that list the Lakers might bring back) to pair alongside LeBron and young stars Lonzo Ball, Kyle Kuzma, and Brandon Ingram. Those moves failed and weren’t good enough to put the Lakers to the next level. Even if Ball, Ingram, and Kuzma had taken the next step in their respective careers, James still wouldn’t have enough help. Too often, James had to do much, causing him to burn out at the end of the season and eventually be rested.

It’s clear the Lakers need to go looking for a big fish. In his career, James hasn’t won any championships without complimentary stars, something he didn’t have in L.A. It’s time to get some. Someone like New Orleans Pelicans’ forward Anthony Davis would be the ideal guy to acquire. Both he and his agent Rich Paul (also LeBron’s rep) have made it clear he’d like to end up in L.A.

Even if it costs L.A. a majority or all of their young talent, bringing in Davis should be priority number one. If they can’t get Davis, they can’t settle for second-rate stars. Guys like Kawhi Leonard and Kevin Durant will be available. It would be unacceptable not to bring in a 1B to LeBron’s 1A. Then, fill the team with depth. Only this time, focus on high-character veterans who can play. Change the culture.

Next, the Lakers need to make a decision on Lonzo Ball and their point guard situation. In two seasons, Ball hasn’t proved he is worth the headaches and circuses that follow him. Ball has shown flashes of being a great point guard, but trusting on him to produce would be a mistake. He has struggled with injuries, hasn’t shown he can shoot at the pro level, and taken a step back in his sophomore season.

It would be wise for the Lakers to move on and find someone with less baggage. If they could make the money work, reuniting James and his former Cavaliers point guard Kyrie Irving would make for great theater. Plus, it would make them immediately competitive. That would obviously be the best-case scenario, but the organization shouldn’t accept anything less until it’s not possible.

The other biggest question mark the team faces this summer is the status of head coach Luke Walton. The former Golden State Warriors interim coach hasn’t found success in his first full-time head coaching gig. With Los Angeles set to miss the playoffs for the third time in three seasons, it appears Walton’s time will be up by the end of the season. It’s sort of unfair, as Walton was brought in to develop a young roster, but was given a shorter win-now leash when LeBron came to town. Bringing in the likes of Jason Kidd, Mark Jackson or Ty Lue over him wouldn’t move the needle all that much, but it’s becoming obvious change is needed. James doesn’t seem to listen to him, and that’s a major problem.

There is quite a bit of work to be done before the Lakers are competitive again. Even with James, the best basketball player on the planet, Los Angeles needs to bring him some help in the form of another superstar and/or depth and make a decision on the future of the likes of Ball and Walton. It doesn’t take too much to make a LeBron-led team good, but the Lakers need to be better than just good. This upcoming offseason will be a major factor in how James’ legacy in L.A. is remembered.