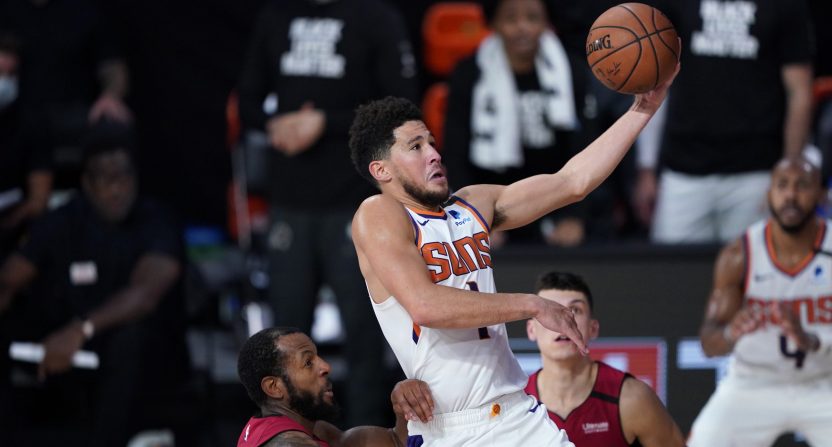 Last season, Jayson Tatum took another leap as a superstar. He emerged in the winter as a dominant first option, a player who could handle the ball every possession and defend at an elite level. In 12 February games, he averaged 30.7 points per game on a scorching 48 percent from three, embracing a role as the Boston Celtics’ clear centerpiece. He made the All-NBA third team for the first time and nearly led the Celtics to the NBA Finals.

The Dallas Mavericks’ Luka Doncic made a similar jump, although at a higher level than Tatum — Doncic made the first team. These sorts of leaps make or break many teams’ seasons and futures. A younger star rising from an All-Star level to an All-NBA level is significant. In the playoffs, we get more clues to a player’s future, as demonstrated by the immense difference between the performances of Tatum and the Toronto Raptors’ Pascal Siakam in the Eastern Conference semifinals.

This season, there are multiple teams that have been languishing outside of the playoffs who made big moves in order to get back in. The Atlanta Hawks dished cash to build around Trae Young. The Minnesota Timberwolves traded for D’Angelo Russell before last year’s trade deadline and drafted Anthony Edwards first overall. The Phoenix Suns traded for Chris Paul.

While none of these teams have a guaranteed spot in the postseason, the play-in round increases their chances. Their younger stars will be the determining factor in that pursuit. Let’s take a look at where these stars have to improve, and what a leap might look like for them:

As I wrote about in more detail in a free agency review, the Hawks made big moves around Young. He has competent ball-handlers to play off of now, in the form of Bogdan Bogdanovic, Danilo Gallinari, and backup point guard Rajon Rondo. While Atlanta still has plenty of youth, these win-now moves for veterans signal a desire to get back into the playoffs immediately. Playing meaningful basketball in Young’s third season would be an undeniable success for Atlanta.

Young will now have a chance to prove that he’s more than an empty-calorie box score guy. He’s shown plenty of signs already that he’s more than that. After all, not many players that average 29 points and nine assists (with an 111.2 offensive rating) are empty-calories. But with weak teammates last year, he ran everything on offense, finishing with an astronomical usage rate of 33.9 percent. His terrible defense necessitated this production.

The presence of solid players around him, if not a second star just yet, will take some of that pressure off. Bogdanovic can run pick-and-rolls as a ball-handler, and Gallinari can attack off the dribble in addition to being a good long-range shooter. Young’s pure counting numbers could decline if all goes well, with his offensive impact going up.

Stephen Curry is the natural comparison. Curry is a short knockdown shooter with a tight handle and great vision who was the centerpiece of a dynasty. Young, who shot 36 percent from three last year, is obviously not close to Curry as a pure shooter, but with a more functional supporting cast, it’s possible that the difficulty of Young’s shots will decrease, helping his percentage.

On catch-and-shoot three-point attempts last year, Young shot 46.6 percent. That comes on a small sample (1.7 attempts per game), and he wasn’t close to that efficiency as a rookie, but it would be positive for Atlanta’s offense to generate more of those looks for Young. That would require more fluid movement and a more active off-ball role for Young. One only needs to look at the divergence between the careers of Curry and James Harden to see how valuable an off-ball presence is for a lead ball-handler.

Young will improve as any third-year player would. He was dramatically better as a shooter last year, and his effectiveness on deep threes will continue to provide Lillard-esque gravity. His passing vision, already fairly advanced, will grow as he sees more reads and runs what should be a more diverse and multi-faceted offense.

He can make patient reads out of pick-and-rolls, sometimes finding passes that most ball-handlers would miss:

Notice how he subtly draws Derrick White away from Bruno Fernando under the basket, whipping a clever back-handed pass to capitalize. These angles are impressive, and the manipulation of defenders is a sign that he can be an elite creator on a winning team.

He may never be anything other than a negative on defense. His effort level could go up, though, as he plays with other competent initiators and the Hawks remain relevant for longer. If Atlanta end up as a solid playoff team and he keeps putting up 30 and nine, an All-NBA appearance is not out of the question.

With Chris Paul in the fold, the Suns have high expectations. Paul is something close to an instant playoff berth. He was magnificent last season for the Thunder, nearly leading them past the Rockets in the first round.

Booker hasn’t made the playoffs in his five seasons. While the Western Conference will be a dogfight again this year, the Suns can reasonably be considered favorites for one of the last handful of spots. Booker and Paul have a chance to be very productive co-stars, with Paul the orchestrating point guard and Booker the high-volume scorer.

The Suns will generate much of their offense in the midrange. Booker and Paul are both efficient scorers from that area of the court, and Paul in particular likes to orchestrate from the elbows coming out of pick-and-rolls. Booker shot 48 percent on shots from 10-16 feet last season, a percentage that approaches Kevin Durant levels of efficiency.

Like Young, one of the keys to a superstar leap for Booker is lowering the difficulty of his shots. Booker spends too much time dribbling himself into contested midrangers and threes. He is a great finisher (72 percent at the rim) and draws fouls at a good rate (seven free throw attempts per game), but he can sometimes make things unnecessarily hard on himself. When he slumped in February, his problem was an inability to gain separation and some bad shot selection.

This, for example, was not the right course of action here:

Anthony Davis is arguably the best defender in the NBA, but Booker should try to take advantage of the size mismatch, not attempt his best Damian Lillard impression.

As with most players, he shoots better on catch-and-shoot looks. While most of his jump shots were pull-ups, his 5.7 three-point attempts per game were close to evenly split between pull-ups and catch-and-shoot attempts. He shot 39 percent from deep directly from a pass, and 33 percent on pull-ups.

Like Jamal Murray in Denver, Booker can be a threat from deep on plays like dribble hand-offs, spot-up plays, and off-ball screens. He can also create from those positions, finding a spot in the midrange or dribbling into a pick-and-roll on the fly. These are the plays that Paul can help generate. It will be interesting to see how Monty Williams uses the shot-creation abilities of Paul and Booker in tandem, particularly with DeAndre Ayton growing into a lob threat.

The biggest point of growth for Booker, in addition to defense, is his passing vision. He’ll have to improve at making his teammates better. There are times when he looks aimless coming off of screens, eventually settling for a mediocre shot:

To be fair, this was not the greatest screen attempt from Cheick Diallo, but Booker looked rushed as he dribbled into a turnaround shot that got blocked. He struggled to lose Andrew Wiggins off the dribble, and failed to find either Diallo rolling to the rim or Kelly Oubre Jr. spotting up on the wing.

He could afford to diversify his offense. Stepback jumpers are valuable for any star (and Booker is a great clutch player as a result), but as his passing evolves, he could find value as a post-up player and a more consistent pick-and-roll creator. He’ll have a lot to learn from Paul, and the two should complement each other well.

It’s an emotional time for Towns, who tragically lost his mother and other family members to COVID-19. When he played in a preseason game this week, it was his first time on an NBA court since February 10. It’s great to have him back — he’s one of the best two or three offensive centers in the league.

The Timberwolves will look to get back into the playoffs this season, with Russell at point guard and with shooting guard Malik Beasley (acquired at the trade deadline from Denver) signed to a four-year extension. Towns will be at the center of that push. He’s dominant on offense, knocking down threes at a high volume and scoring from the post. His physical frame allows him to overpower smaller players, and many centers have a tough time getting out to him on the perimeter, where he’s an outstanding sharp shooter.

With Russell and Ricky Rubio added to handle the ball, Towns will be able to feast on pick-and-pops. Coach Ryan Saunders has indicated that he’d like to play Russell and Rubio together as dual guards at times. That set-up, heavy on ball-handling, would be favorable for Towns.

The issue for Minnesota is defense. Russell was atrocious defensively for Golden State last year. Rookie Anthony Edwards will face a steep learning curve. Wing stopper Josh Okogie can only do so much to offset these weaknesses.

Perhaps the biggest variable for the Wolves, then, is Towns’s development on the defensive end. He has been below-average for most of his career, and while he’s shown good signs (notably his block rate), he’s far from a fearsome rim protector.

If Towns can grow into an acceptable base of a defense, Minnesota has a feasible path to a playoff spot. That may be a lot to ask, but with a little more effort and some willingness to take contact inside, Towns can get there. His peak as a player, and his team’s playoff chances, may depend on it.