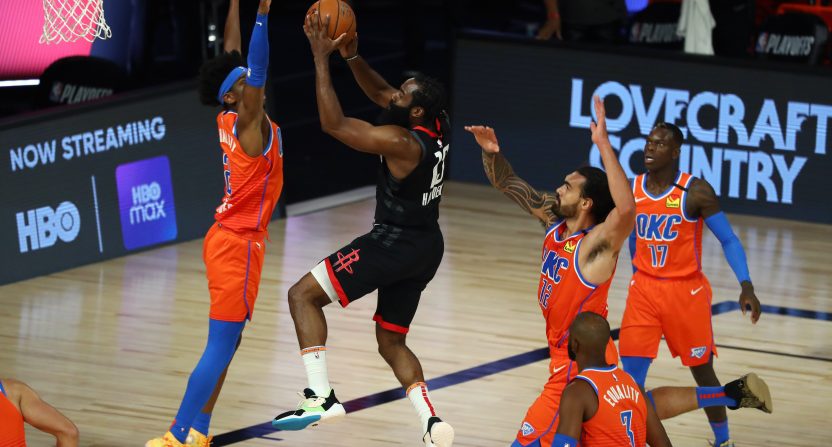 The injury to Russell Westbrook prior to the first-round playoff series between the Houston Rockets and Oklahoma City Thunder was supposed to give the Thunder a legitimate chance to pull off the upset. The Rockets’ ultra-small lineup should be less imposing when Westbrook isn’t bulldozing through gaps. James Harden’s offensive load would get heavier.

OKC lost 123-108, trailing by 21 after three quarters. Harden’s supporting cast torched an OKC team that struggled to competently switch and stay in front of perimeter players. The Thunder’s defense was bad throughout the game, and speaks to some strategic issues other teams might face with the Rockets’ unprecedented setup.

Interestingly, Billy Donovan trusted his perimeter defenders (Dennis Schroder and Terrence Ferguson most often) to guard Harden straight up. There was little trapping or creative gimmicks, as others have tried in the past. This straightforward approach requires quality defenders and an organized defense against Harden’s drives, which inevitably produce scrambled opponents.

The Thunder failed at both tasks, and the most troubling part was not Harden’s individual contributions; it was his teammates who found acres of space:

In the first half, Harden didn’t shoot incredibly well (4-of-12 from the field and 2-of-7 from three), but he made five free throws, and most importantly, created significant offense for his teammates. He got hot in the second half and ended up with 37 points, including 6-of-13 from three.

Donovan will accept that sort of production. Harden’s tight ball-handling allows him to beat any defender in the NBA off the dribble. His production comes down to him hitting threes, and it’s impossible to take those threes away.

But once Harden got past the point of attack, OKC’s defense crumbled. You can’t expect to stop his step-back threes, but you can control your rotations and rim protection. A Rockets offense that has space to attack and easy passes to make thanks to Harden’s gravity is more sustainably good than an onslaught of Harden threes.

The Thunder rarely rotated at the crisp level necessary to contend with this athletic, shooting-heavy opponent. Without the presence of Westbrook’s non-shooting, Houston played most of the night with five long-range bombers on the floor. They found one open on almost every possession. It wasn’t so much OKC’s defense directly on Harden that was the problem; it was their attempt at fluidity once Houston started driving and kicking.

Against a team like the Rockets, with no bigs on the floor, you have to be willing to switch almost everything. The Thunder were hesitant and slow. They were late closing out shooters, and sometimes looked willing to let the Rockets’ role players pop threes. Donovan may have been betting on guys like Ben McLemore and Jeff Green to miss shots. That didn’t happen.

They were particularly helpless when Harden beat his man off the dribble and drove to the rim. If you’re going to let a guy like Ferguson pick up Harden without a trap, you have to give him protection at the hoop. Steven Adams was often too busy watching PJ Tucker in the corner, and other potential helpers (including Shai Gilgeous-Alexander, who has the length and defensive awareness to make an impact off the ball) were wary of helping off their man:

Gilgeous-Alexander was preoccupied with the Rockets’ off-ball movement as Harden dusted Andre Roberson. The Thunder were disorganized and unprepared to put bodies in front of shooters, as though they didn’t trust teammates to rotate.

The Rockets, on the other hand, had their five-wide attack clicking on all cylinders. The shooters were hitting their shots. Tucker hit three from long-range and McLemore hit four. When the Thunder managed to run them off the line, Houston’s secondary pieces ate up the available space. Green had 22 points, with five of his eight field goals coming from two-point range, and Eric Gordon had 21, with five two-pointers of his own.

Without a player protecting the rim, the Rockets were able to navigate their way into the midrange area and find passes from there. The drive-and-kick game was humming all night. The guys on the perimeter made picture-perfect extra passes and roasted Thunder defenders.

One of the most difficult parts of facing this Rockets team (particularly sans Westbrook) is navigating how to protect the rim when the Rockets don’t have anyone near it. You’re either leaving someone open, or you’re trusting your players to make on-the-fly decisions about whether to help.

Houston found much of their success attacking OKC straight up on drives to the hoop, taking advantage of minimal rim protection. If there isn’t anyone in the lane to clog up drives, the onus is on the perimeter defenders to stay in front of their man. The Thunder failed to do that. Gordon frequently took advantage:

Watch back that clip and focus on Adams. He was the Thunder’s traditional five on the court, and he had a decision to make between camping in the paint or chasing Robert Covington to the three-point line. He was so worried about Covington that he failed to contest Gordon’s layup. The Rockets instill so much fear in their opponents from long-range that they drew Adams away from contesting an easy layup to cover a player who shot 31 percent from three this year.

These are the dilemmas the Rockets can present. Donovan might have been onto something if he entered with the plan to have guys sag off Houston’s secondary shooters. Leaning into that would give Adams less to think about in plays like the above. Force Covington to hit those shots.

Otherwise, solutions aren’t obvious for OKC. Trapping Harden would put more pressure on rotating defenders. Part of their issues are individual; Chris Paul and Gilgeous-Alexander, notably, could have played much better on defense. The return of Dort, a very solid defender, could make a difference.

But the Thunder are too athletic as a team to face so many problems against a team that spaces so well. They have the rest of the series to come up with defensive solutions to a basketball chess board.