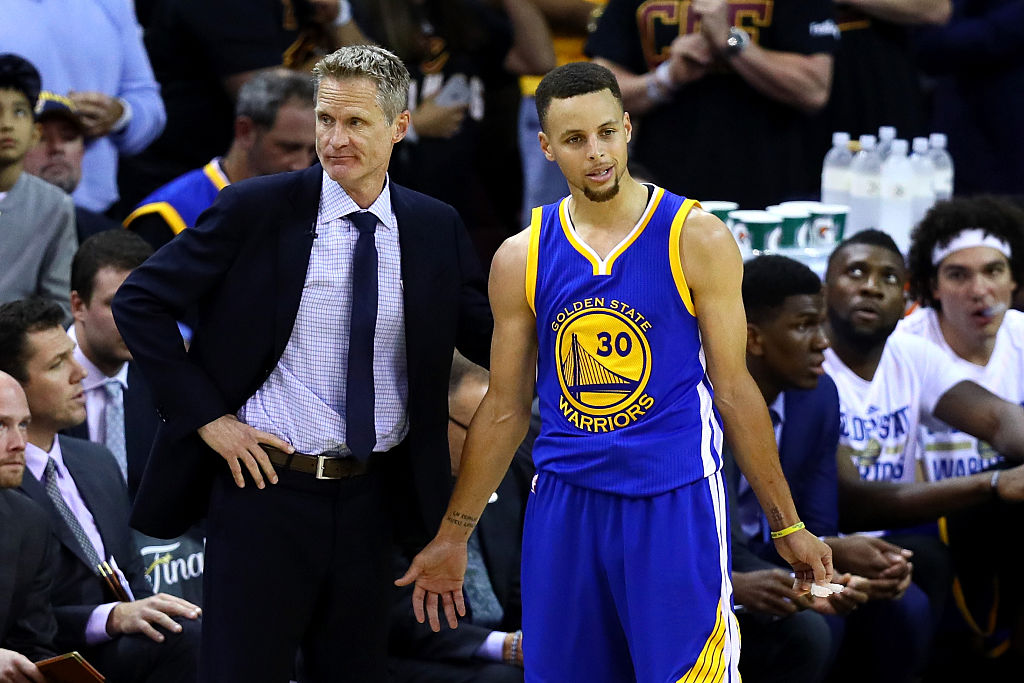 It took me a while to figure out when I’d had that feeling before. As I watched the Golden State Warriors stumble through the first quarter of Game 6 of the NBA Finals, it finally hit me: Game 7 of the 2002 World Series between the San Francisco Giants and the (then-) Anaheim Angels.

I’ll get to the baseball parallel, but first, the Warriors feel that they were screwed out of their rightful championship. They had done what they were supposed to do, winning Game 4 on the road, and had shown that with all of their guys against all of Cleveland’s guys, they were definitely superior.

LeBron James had also realized this, and went into action. With 2:47 to go, he pushed Draymond Green while his feet were behind Green’s. As a result, Green fell to the floor, hard on his backside, because he couldn’t get a foot back to support himself or even break his fall. This is the play that is most overlooked in the tsunami of commentary on the subject. Referee Danny Crawford is looking right at the play, and does not make the foul call on James that would have changed history. A whistle stops play, and none of the following happens:

James wouldn’t have been able to make the conscious decision to step over Green on the way back to the play. (This, by the way, is also a foul.)

Green, whose first reaction to getting knocked down wasn’t aggressive or antagonistic at all, wouldn’t have tried to return to his feet, when he was held down by James’s action. He wouldn’t have snapped by lashing out at James, hitting him below the belt.

Crawford could have nipped it in the bud by calling LeBron for his initial shove, before the nut-punch that saved Cleveland. (The episode will become the most celebrated moment in the past 50 years of Cleveland sports history if the Cavaliers win Game 7.)

Yet he didn’t call that initial foul, and called none of the other fouls on both men in the next several moments. Although he did call a double foul on the two players during an ensuing loose-ball scramble a little bit later.

To most people not associated with the Warriors in some fashion, this event meant that Green was a dirty player who intentionally hits guys where he shouldn’t. Warriors people, on the other hand, still look at the two Steven Adams incidents as accidents that happened as part of “basketball plays.” They agree that Green struck James, but in the only place accessible to him at the moment, and that his subsequent attempt to push James in his back shows as much.

At this point, none of what anybody thinks matters. The only thing that matters is what the Warriors — and to a lesser extent, their coaches — feel: They got screwed. LeBron James, by virtue of a hard foul and then a disrespectful act, got Green kicked out of Game 5 and breathed life into his team when there was none. The Cavs were flat-lining at the end of Game 4. The Warriors felt that the championship they fought so hard for, came back against OKC for, and dealt with Steph Curry’s injuries for, would be theirs after a romping, celebratory Game 5 win at Oracle Arena.

Hold that thought: “A team thinks it had won a championship.” 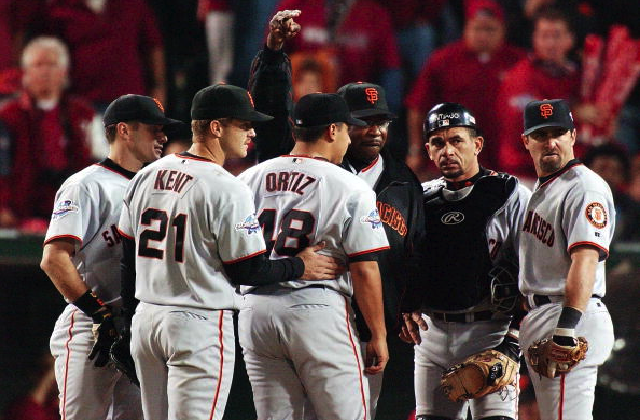 In the 2002 World Series, the Giants took a 3-2 lead to Anaheim for Game 6. They had trailed 2-1 in the series, but won Games 4 and 5 to move within one win of an elusive championship. (Yes, the Giants used to struggle in October, if you can remember life beyond the past six years.)

Going into the home half of the seventh inning, the Giants led 5-0 behind their ace, Russ Ortiz. The Angels put two runners on with one out, and manager Dusty Baker made a pitching change. As Ortiz left the mound, Baker — to whom Ortiz had given the ball — flipped it back to him as if to say, “You’re going to want to keep this when we win this thing.”

The Angels scored three runs in the seventh and three more in the eighth against a Giants bullpen that had been stellar all year. That 6-5 loss didn’t decide the Series, except it really did.

The Giants managed only six hits in Game 7. The lineup that had hit 14 homers and 21 extra-base hits in the first six games managed one double. Their leadoff batters in each inning didn’t reach base until the ninth. They played without emotion. They looked like they didn’t want to be there, like they shouldn’t have to be there.

The Golden State Warriors have to completely change their way of looking at this series by Sunday at 5 p.m. local time. They have to stop thinking that they would have won Game 5 if Draymond Green played, and accept the fact that they lost. Would Green have had the defensive impact on James and Kyrie Irving we think he would have? That the Warriors feel in their gut he would have?

Who knows? That’s sports. It’s unlikely that Irving and James would have had 82 points between them in that game with Green in the middle of the Warriors’ defense, but we don’t know that. They need to humble themselves and realize that victory was not guaranteed in that game, no matter how likely it seemed. Only then can they return to their usual mindset, and play with aggression and fire.

It’s one thing for the media to speculate and pontificate as to what would or wouldn’t have happened, but the Warriors can’t afford that luxury any more. Like it or not, they’re in Game 7, and losing it will not be pleasant whether they think they should have to play it or not.

Now, of course, several events since that moment with 2:47 to go in Game 4 have made the Dubs’ job even tougher. The loss of Andrew Bogut is enormous. To not be able to put in a veteran, savvy rim protector for at least a few minutes every quarter means the Warriors are highly stressed for the entire game. Any drive to the basket by Irving or James (or Dahntay Jones, for God’s sake!) is a 911 call. Bogut also sets great screens for the shooters, and when he and Green are on the floor together, it frees Draymond up to be more of a creator instead of a screener.

The problem for Steve Kerr is that Festus Ezeli is playing very poorly on both ends, Marreese Speights — always an adventure when he goes in — can’t be trusted with important minutes, and Anderson Varejao seems to only be able to give high-energy spurts for very short periods. He has no bigs he can trust.

Then there’s the Andre Iguodala injury. He managed to stay on the floor in Game 6, but was nowhere near his usual level of defensive efficiency, and LeBron took full advantage. This is one time the Warriors may be glad there are two days off between games, although their playoff record when there’s more than a one-day break is now 6-8. (It’s also why LeBron is so fresh late in the series. Last year, with one-day breaks between Games 4 and 5, and then 5 and 6, LeBron wore down.)

Lastly, what are the Warriors supposed to do with Harrison Barnes? He is now 2-for-22 in the last two games. I heard a radio interview after Game 5 in which he said he just had to “let it fly,” and I almost drove off the road. Barnes needs to stop letting it fly. His 3-point attempts are basically turnovers at this point. If defenders drop off him, and who wouldn’t, he needs to dribble in about 10 feet and take a shorter shot. At least he’s in a rebounding position then.

My friend Matt Zemek suggested that Steve Kerr put Harrison on LeBron in Game 7 and just tell him, “This is how you’ll contribute in this game. Don’t worry about your shot. Make James work for everything, and don’t worry about fouling him. Do it until you foul out, and we’ll figure something else out.”

Obviously, Steph Curry and Klay Thompson also have to score big numbers to give the Warriors a chance to win. I think it all starts between their ears, though. If they can stop feeling like victims and start acting like they’re ready to prove they’re the best team, the Warriors have a shot. If they can’t, Golden State will be the first team ever to blow a 3-1 lead in the NBA Finals, which would certainly be a crushing disappointment.

One thing the Warriors are learning through this process is that being the hunter is a lot different than being the hunted. LeBron James has almost always been the hunted, even when he was on teams that were inferior to the team he was facing. It took the greatness of the Warriors and that 3-1 deficit to make LeBron the underdog, the hunter, and he’s riding it for all it’s worth.

But with one more loss, Golden State will go from being the hunted to the “haunted,” and that never goes away. Rick Barry talked about that last year, how losing Game 7 of the 1976 Western Conference Finals to Phoenix, 94-86, is still an upsetting memory.

The Warriors have to realize that, whatever Vegas says, they’re the underdogs in this game, and they have to play like it.

Patrick Mahomes is deserving of the top spot, but Russell Wilson is putting together otherworldly numbers.

The Rays needed this one.

Patrick Mahomes is deserving of the top spot, but Russell Wilson is putting together otherworldly numbers.

The Rays needed this one.