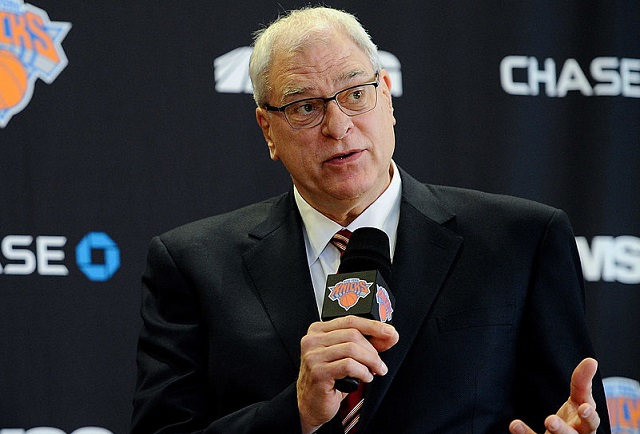 New York Knicks president Phil Jackson perhaps stretched the rules with the right team, if he were going to do so.

Golden State Warriors head coach Steve Kerr said that Jackson has not discussed the head coaching vacancy with one of the NBA’s top assistants, Luke Walton, who is high on many teams’ lists for their head-coaching vacancies. Kerr noted to the San Jose Mercury News‘ Jimmy Durkin that doing so while the Warriors were still involved in the NBA Playoffs would be tampering.

Walton played for Jackson for a number of years in Los Angeles with the Lakers and played in the triangle offense, something Jackson reportedly wants in his next head coach in New York. Walton reiterated to the Mercury News that he had not spoken to Jackson about the Knicks’ head coaching vacancy:

“I talked to Phil, but I always talk to Phil. He’s a mentor of mine. There was no job interview whatsoever. It was just a conversation, which is not that rare for Phil and I to have.”

Walton’s words are congruent with those of Kerr, who said that nobody from the Knicks had interviewed his assistant for the position. Kerr told the Mercury News that there was contact, but nothing out of the ordinary for the former coach and player:

“Nobody from New York has interviewed Luke. That has not happened. Luke and Phil have had contact, just like Phil and I have had contact. But not anything to do with the job — that would be tampering.”

Jackson, keeping his distance from the media, took to Twitter to say that no actions had been taken as far as the Knicks’ coaching search, and that “nobody has been asked nobody said no.”

Press accounts of coaching actions are untrue. Nobody has been asked nobody said no.

Kerr further commented, as his story, along with Jackson’s and Walton’s, stayed in line:

“It’s important to note that Phil has not reached out to Luke about the job. That’s false. Friendships sometimes dictate conversation and there was some of that, but nothing to do with the job.”

“He will always have permission. We will never hold anybody back from interviewing for a position they’re interested in, but the timing has to be right and Luke’s kind of busy right now.”

Frank Isola of the New York Daily News believes there is a chance that the Warriors could file tampering charges, but considering the relationships involved between the three, and Kerr’s statements, it doesn’t seem quite so likely.

In this case, Phil called an assistant coach of a team during the playoffs without permission. The Warriors may file tampering charges.

According to the New York Post, Jackson is expected to interview former Cavaliers coach David Blatt. The Post also noted their previous report that Tom Thibodeau, who appears to be the lead candidate for every open position (and reportedly would like to run the Minnesota Timberwolves organization), won’t be considered for the Knicks job.