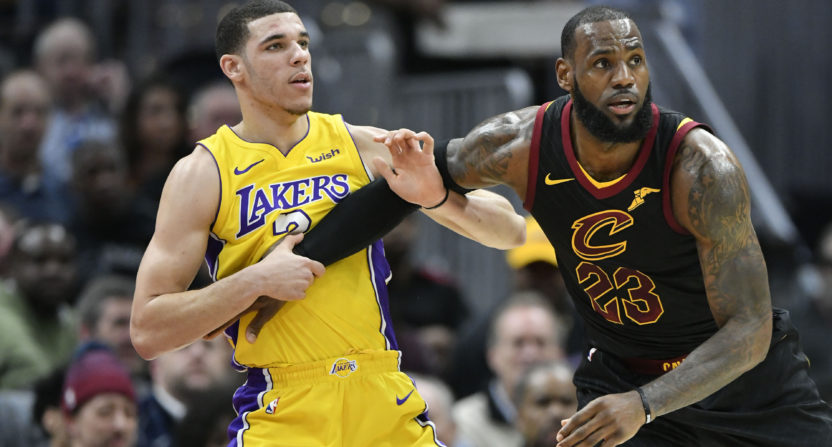 The NBA offseason is a time when everything you hear, every rumor that floats across your Twitterfeed, and every trade or free agent scenario that someone pitches, should be taken with a grain of salt. A pillar of salt, really. And that’s a normal NBA offseason, not one that includes LeBron James’ free agency.

Everyone and their mother is trying to figure out where James will end up next season (including this site). And with that comes a whole lot of conjecture and reading into things that may or may not have any impact on his decision whatsoever.

You also have to couple James’ potential departure from Cleveland with the impending decision of where the Spurs will send disgruntled superstar Kawhi Leonard. It’s possible he could remain in San Antonio but the smart money is on a fresh start elsewhere and Leonard apparently prefers a move to Los Angeles to play for the Lakers.

The Spurs are fully engaged in trade talks with several teams on Kawhi Leonard, including the Lakers and Celtics, league sources tell ESPN. Boston has long had the assets that the Spurs most covet in a potential Leonard trade.

Of course, the Lakers are also a trendy destination choice for LeBron. The idea of either player ending up there is an exciting proposition for one of the NBA’s most storied franchises, a team that needs a serious shot of talent in order to get back to being a contender. But imagine if you could add LeBron and Kawhi together? Or even LeBron and Paul George, as many have speculated. All of a sudden you have yet another Western Conference super-team that could challenge the Golden State Warriors for league domination.

There are a lot of moving pieces that need to fall into place for that to happen. But one piece that does seem to keep coming up over and over again is Lonzo Ball, which invariably means you’re also talking about LaVar Ball. As you might imagine, the general consensus seems to be that if one or more of these superstars are inbound for the Lakers, they’re not going to want the Ball Family Show to continue while they’re there.

In the potential trade for Leonard, the Lakers have apparently offered up their budding star. However, the Spurs don’t seem too excited about the prospect of taking him and his father on. Leonard seems intrigued by the idea of heading to LA so he might be okay with the idea of taking over the squad with Ball on it, but there’s always the possibility that they’ll need to move him and his father’s ego to make room for Kawhi.

And then there’s LeBron, for whom the Lakers would likely move heaven and earth in order to acquire the services of. According to Zach Lowe, James’s camp is pretty adamant about not wanting anything to do with the Ball Family drama.

…the Celtics and Sixers have kicked the tires on Leonard, and both have the goods to outbid even the best L.A. offers — unless the Lakers get crazy and include three first-round picks and two of their best young players. (They likely wouldn’t send both Brandon Ingram and Lonzo Ball to San Antonio, though there are persistent questions around the league about whether LeBron would want to play with the Lakers amid the Ball family circus. A logical endpoint and middle ground for negotiations ahead of Friday’s deadline might be something like Brandon Ingram, Kyle Kuzma and two unprotected first-round picks.)

Ultimately, we still have a long way to go before any of this shakes out and it’s entirely possible that neither LeBron or Kawhi end up in Los Angeles next season. At that point, the Lakers will probably have to deal with LaVar’s annoyance that the team offered up his son so easily, but they knew what they were getting into.

The real fun part is wondering where Lonzo might end up if LeBron and Kawhi do end up coming to town. The Spurs really don’t want anything to do with him. It’s unlikely any contender is going to want to take him on. Could we possibly have a dream trolling scenario where LaVar is forced to watch his son play for Cleveland or Memphis or Minnesota, far from the bright lights of the major media markets? One can dream, we suppose.

In the end, if the rumors and reports are to be believed, the lesson seems to be clear. Lonzo Ball’s baggage is always going to make him a liability and one that his team will always be willing to unload for someone better (or maybe even on the same level).