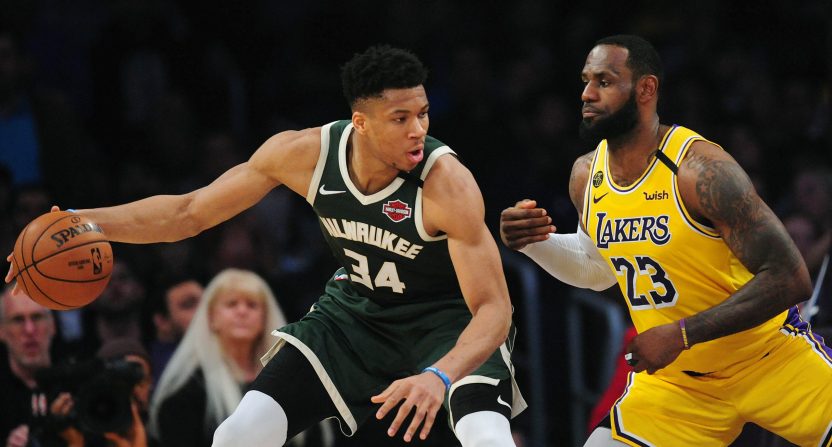 The NBA has hit the pause button on its season due to the COVID-19 pandemic. We don’t know if or when it will resume. If the 2019-20 season is over, here should be the award winners:

LeBron James closed the gap between himself and Antetokounmpo. Included in his second-half surge was a dominating performance in the head-to-head matchup last month. However, based on what we know so far, the reigning MVP should still be the MVP. Antetokounmpo’s numbers are so much better than everyone else. It’s impossible to ignore.

Antetokounmpo is the most overwhelming force in the NBA. The Bucks’ superstar easily leads the NBA in Player Efficiency Rating, Real Plus-Minus (7.96), and is second in Win Shares (10.4). Antetokounmpo’s team has also been dominant. For most of the season, the Bucks (a league-best 53-12) were on pace to have arguably the greatest regular season in league history. Before the loss to the Lakers, their scoring margin was plus-12.3, which would set a record (it now stands at 11.3).

The list of players who have won back-to-back MVPs over the past 20 years: Tim Duncan, Steve Nash, LeBron James (did it twice), and Stephen Curry. Antetokounmpo should join that group.

As always, this is a hard category to judge. Measuring a player’s defensive impact can be complicated. Teammates, systems, and coaching all factor in. There is no one number that can completely isolate performance. You can make arguments for Rudy Gobert, Anthony Davis, Bam Adebayo, and Kawhi Leonard among others.

But Antetokounmpo has the most compelling case. He could become the first player to win MVP and DPOY since Hakeem Olajuwon turned the trick in 1993-94 for the Houston Rockets.

Antetokounmpo leads the league in defensive rating by a wide margin, and is third in defensive Real Plus-Minus. He’s the key reason why Milwaukee has the NBA’s best defense in terms of field goal percentage (41.3), points allowed in the paint (38.8), and defensive rating.

It’s hard to believe Doncic wasn’t allowed to legally drink until February. The 2019 Rookie of the Year was already in the discussion of greatest teenage NBA players, along with Magic Johnson and LeBron. Now, the 21-year-old has ascended to become a top-10 player by his second season. Doncic, along with the healthy return of Kristaps Porzingis, has elevated the Mavericks (40-27). The team’s record might have been even better if not for an ankle injury that cause him to miss 11 games.

The only players with a better PER than Doncic are Antetokounmpo, James Harden (28.39), and Anthony Davis (28.25). He’s fifth in Real Plus-Minus (3.80). Only Antetokounmpo, LeBron (6.86), Harden (5.71), and Kawhi Leonard (4.08) are better. He also has a league-high 14 triple-doubles. Even more impressive, Doncic’s playmaking has led the Mavericks to the best offensive rating in NBA history. Can’t wait to see what Doncic looks like when he enters his prime.

This award probably will go to a Clipper. The question is: Which one? It’s Harrell vs. teammate Lou Williams. Both have a good case.

Williams is gunning to become the first to win this honor three straight seasons and four times overall. But his numbers are slightly down, and that might open the door for Harrell, who’s enjoying a career season. Los Angeles’ energy man has improved his scoring and rebounding averages every season. This year, he’s second in the NBA in scoring off the bench (18.62), slightly behind Williams (18.65). Plus, Harrell has been a better overall player. He’s 20th in the NBA in PER (23.17). And his defensive versatility is a big reason for the Clippers’ success. Harrell is averaging a team-best 1.1 blocks per game, and is tied for first in the league in charges drawn (30).

For most of the season, Morant has been the clear-cut frontrunner. And deservedly so. Memphis opened with an under/over of 27.5 victories. The Grizzles (32-33) are right now the No. 8 seed in the Western Conference. Morant leads all rookies in scoring (17.64), assists (6.93), and is fourth in PER (18.02). He has infused energy into the franchise and made Memphis must-see television. However, Zion Williamson is mounting a late charge after missing most of the season due to injury.

In 19 games, Williamson’s statistics are ridiculously good. His scoring average (23.6), rebounding (6.8), field-goal percentage (58.9), three-point accuracy (46.2), and PER (24.2) are so much better than every other rookie. But Williamson has played in a small number of games, and New Orleans is three games behind Memphis in the loss column. You must give more weight to what Morant has accomplished. His win shares are also higher than Williamson (3.4 to 1.8).

In his rookie season, Nick Nurse won an NBA championship thanks to the one-year rental of Kawhi Leonard. But now we’re learning that Nurse might be a better coach than we thought. The Raptors have a better winning percentage (.719) than they did last season with Leonard (.707). That’s astounding.

Before the season, the Toronto’s over/under was 46.5 wins. The Raptors are 46-18 with 18 games to play, and would be the No. 2 seed in the East. The Raptors were 58-24 with the No. 2 seed last year. Give Nurse credit. His team has been much better than Philadelphia or Boston. Also, Nurse has overseen the development of Pascal Siakam, who has been a go-to player.