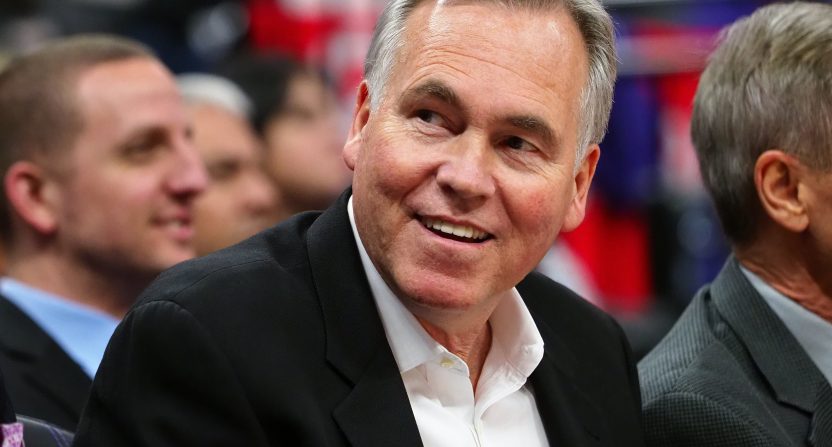 The NBA has been and will always be a players’ league. The stars matter more than the coaches. However, you can make an argument that no coach has had a greater influence on the modern-day product than D’Antoni. The 3-point revolution, spacing, pace-of-play – D’Antoni might not have invented these but he certainly perfected it over a decade ago.

His Phoenix Suns teams of the aughts were the Golden State Warriors of years past. The D’Antoni style was such a departure from the norm that he was labeled a “radical” and occasionally mocked. He was told he would never win a championship by running, gunning and jump-shooting. D’Antoni didn’t win with the Suns. He might win as coach of the Houston Rockets. But regardless if he wins a title or he doesn’t, one can’t dispute that D’Antoni was way ahead of his time and eventually the rest of the league caught up.

Under Steve Kerr, the Golden State Warriors borrowed some of D’Antoni’s theories and won a pair of championships. And now D’Antoni’s Rockets will try to knock off Kerr’s Warriors in the Western Conference Finals. The NBA has evolved into a beautiful game and it might not have happened if it weren’t for D’Antoni.

In 2003-04, D’Antoni’s first season with the Suns (21-40) was forgettable. But the next season, something remarkable happened.

Boosted by the free agent acquisition of Steve Nash, Phoenix (62-20) became the most exciting team in the NBA. The Suns took the most 3-point shots in the league (24.7) and played at the fastest tempo. Phoenix led the league in scoring (110.4) and offensive efficiency (114.5).

The rise of the Suns wasn’t just about Nash. While he was an All-Star with the Dallas Mavericks, that same franchise declined to match six-year, $63 million contract offer by the Suns. Nash was 30-years-old – an age when many NBA players begin to decline. But in the D’Antoni system, Nash became the most lethal offensive weapon in the league. Nash won back-to-back MVP awards (2005, 2006) and became a Hall of Famer.

From the 2004-05 season through 2007-08, Phoenix were must-see TV. With flashy Nash passes, Amar’e Stoudemire dunks and Shawn Marion’s matrix moves, the Suns reached the Western Conference Finals twice (2005, 06) and won 60 games twice (2005, 2007). Despite this success, there were critics. D’Antoni’s teams were dismissed as “gimmicky” because they weren’t great defensive teams and never reached the NBA Finals.

The story of the D’Antoni Suns might have been different, if not for one of the most pivotal suspensions of all time. In Game 4 of the 2007 Western semis, Spurs’ Robert Horry hip-checked Nash into the scorer’s table late with a hard foul in the contest. That led to an altercation which resulted in the one-game suspension of Stoudemire and Boris Diaw for leaving the bench.

Without Stoudemire and Diaw, Phoenix lost Game 5 and then lost the series four games to two. That Suns team was good enough to win a championship. Instead, that marked the beginning of the end.

D’Antoni lasted one more season after that as he and then-general manager Steve Kerr had philosophical differences which might have peaked when the Suns acquired Shaquille O’Neal. D’Antoni left the Suns for the Knicks in 2008.

D’Antoni wasn’t able to recreate his winning ways with New York. Then again, a lot of good coaches have failed under the James Dolan ownership. But D’Antoni did show that he runs the most point guard-friendly offense in NBA history. He turned Nash into a Hall of Famer. In New York, he took an unknown (Jeremy Lin) and turned him into a national sensation. How cool was Linsanity? In his 12 starts before the 2012 All-Star break, Lin averaged 22.5 points and 8.7 assists, and New York went 9–3. Lin was on the cover of Sports Illustrated twice, Time magazine and People – all in the same month!

D’Antoni was fired by the Knicks and had another poor stint with the Los Angeles Lakers. But his impact started to get more recognition when Steve Kerr, who had no previous coaching experience, took over the Golden State Warriors in 2014-15.

Kerr stole a few pages from the D’Antoni playbook. He implemented a faster paced style and took more 3-point shots to take advantage of “Splash Brothers” Stephen Curry and Klay Thompson. In Mark Jackson’s final season, the Warriors were sixth in pace. In Kerr’s first season, they were first. He realized what D’Antoni figured out a long time ago:

All of a sudden, Golden State became the most exciting team in the league. They won the NBA championship in 2015 by playing at the fastest pace in the league. The next season, they had the best record in NBA history (73-9) by taking more 3-point shots than anyone (31.6 per game). The next season, the Warriors added Kevin Durant and continued their dominating ways to win their second championship under Kerr.

Golden State’s success gave fast, wide-open, 3-point basketball credibility. The rest of the NBA noticed. A style of play once lampooned was now being copied. This season, Golden State was only fifth in pace. They don’t even take the most 3-point shots. Houston launched a staggering 42.3 – those Rockets are coached by, of course, D’Antoni.

Probably thanks in part to Golden State’s success, Houston hired D’Antoni as its coach in 2016. His system immediately transformed James Harden, who will likely be this year’s MVP. D’Antoni has also made tweaks to accommodate a second point guard, Chris Paul and help the Rockets (65-17) finish with the NBA’s best record.

The matchup between Houston (114.7 points per possession) and Golden State (113.6) will be the first conference final with two teams averaging over 112 points per 100 possessions.

D’Antoni has changed the game in other ways.

As teams have become more perimeter oriented, the traditional low-post scoring center has become a dinosaur. Teams are no longer looking for the next Shaquille O’Neal. They want the next Steve Nash, James Harden or Steph Curry.

D’Antoni changed the game for the better, saving it from low-scoring drudgery. In the 2005 NBA Finals, the San Antonio Spurs defeated Detroit Pistons. In five of the seven games in that series, the losing team failed to score 80 points. Only once did the winning team crack 100 points. The Spurs and Pistons were No. 23 and No. 29 respectively in pace that season.