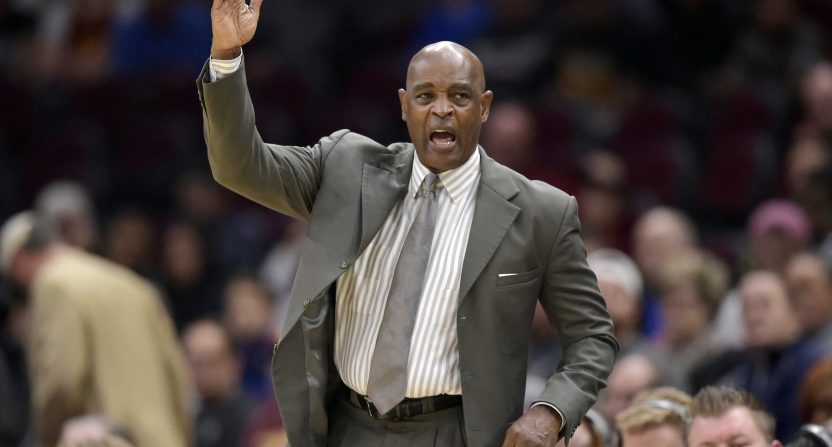 Cleveland sports aren’t in a great place right now, even grading on their well-earned curve. The Browns and Cavs both fired their coaches in the last week, just eight and six games into their seasons, respectively.

The Cavs in particular seem to be in disarray, probably because we’ve never really known an arrayed version of the Browns. The Cavs, though, had LeBron James for two separate stints, and obviously got a title and multiple Finals appearances out of it. But they were a team built entirely to support LeBron, and last season they didn’t even do that great a job of that, which means with LeBron gone, things look awful.

Lue’s dismissal was predictable, though no one really expected it to happen this soon into the season, which raised eyebrows. Now, there are reports that the Cavs are having problems even hiring an interim coach, which isn’t going to do much to quell suspicions that things are going off the rails quickly. Via ESPN’s Brian Windhorst and Adrian Wojnarowski:

The Cleveland Cavaliers and assistant coach Larry Drew have no traction in contract talks, and the sides could be headed for a peculiar stalemate over an interim coaching position, sources told ESPN.

Drew said he was told the Cavs might bring in a new head coach from the outside, but the team has not yet been aggressive in hiring one, sources said. Drew, who is one of the league’s highest-paid assistants at nearly $1 million this season, is seeking an adjustment to his contract that would guarantee him additional money in return for assuming the interim job. His deal is up in July.

“There are no updates, which I’m very disappointed about,” Drew said Tuesday. “I’m going to be professional and I’m going to do my job. It’s been close to 72 hours.”

It is unclear how long Drew would be willing to act as coach without a new agreement.

The Cavs seemingly want Drew to take on head coaching duties without a bump in pay, which they must think is a justified ask given his high base salary. Drew quite reasonably sees that as much more responsibility (especially since coaching this Cavs team is going to be a thankless task) without any more compensation.

While that situation plays out, the Cavs had to manage another issue on the team Tuesday with veteran guard JR Smith. For the second time this season, Smith was informed he would be removed from the rotation and not receive guaranteed playing time, sources said. Smith was upset by the news and considered taking some time away from the team, sources said. Smith decided to stay for the time being, but he didn’t play in Tuesday night’s 136-114 win over the Atlanta Hawks.

The report also mentions that the Cavs are likely going to become sellers, a stance that probably should have been taken this offseason. But Dan Gilbert has for years chafed at the idea that the Cavs are nothing without LeBron, despite the fact that they’ve pretty consistently been nothing without LeBron. As to the next coach, it’s an odd time to try and make a long-term hire; unless you’re bringing in someone currently unemployed, it’s tough to see the Cavs making the best possible move for their team going forward if they force a hire now.

Drew clearly knows that, and just as clearly wants to use that leverage to get a bump for the rest of the season, because what’s the alternative? No one coaching the team? Drew could very easily say “Hey, I have a contract as an assistant, I’m not a head coach.” This isn’t normal, and it also can’t bode well for Cleveland’s eventual attempt to hire their next head coach, whether that comes soon or after the season.