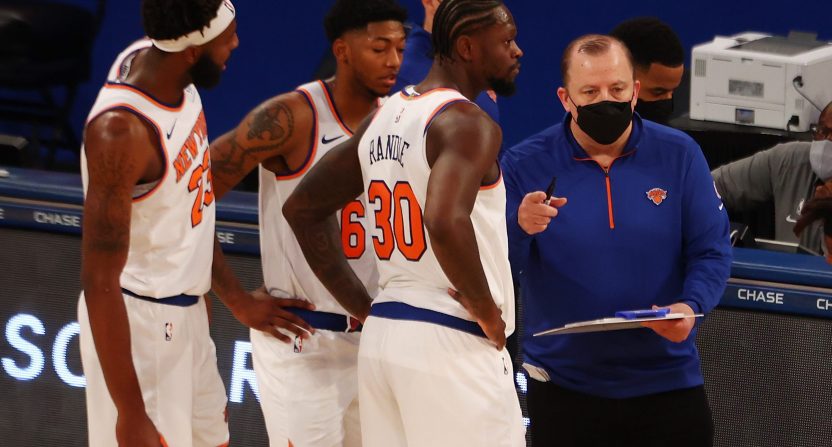 The NBA is famously predictable. We usually know who’s good and who’s bad before the ball is tipped. But in this volatile season (due to the pandemic, the truncated schedule, and a rash of injuries) no one could have predicted the rise of the New York Knicks.

The Knicks (37-28), the longest longshot to make the postseason, are the No. 4 seed in the Eastern Conference. They went 11-4 last month with the NBA’s top net rating for April. With seven games left in the regular season, they’re likely playoff-bound for the first time in eight years. New York entered this 72-game slate with the lowest over/under win total (21.5). Their preseason odds to win it all were +50000, tied for worst along with the Cleveland Cavaliers and Detroit Pistons.

“They just look like a good team,” ESPN’s Zach Lowe said on The Lowe Post podcast. “Is there any reason to believe that this is a fluke anymore?”

Holy Spike Lee. A franchise that hasn’t been championship relevant in two decades suddenly is must-see TV. A generation has grown up seeing the Knicks mostly as a laughingstock with one of the most disliked owners in sports. We’ve watched James Dolan be widely-mocked for his jazz band and chuckled at his feud with one of the most beloved former players in franchise history. Even the kind-hearted animated feature Soul dunked on New York.

The Knicks have been so embarrassing for so long that fans have begged him to sell. That’s not going to happen. Dolan presides over the most valuable team in the league, worth an estimated $5.4 billion. But this season, New Yorkers finally have a reason to smile with candidates for Most Improved Player (Julius Randle), Coach of the Year (Tom Thibodeau), and the All-Rookie Team (Immanuel Quickley). Also, veteran Derrick Rose has been an impactful mid-season pickup.

New York is winning with a retro formula. Today’s NBA favors fast play and volume three-point shooting. The Knicks are dead last in pace and fastbreak points, and have taken the fourth-fewest number of three-point shots per game. That strategy is straight out of a playbook from the 2000s.

Thibodeau, who’s in his first season with the Knicks, has been notoriously reluctant to embrace some elements of the modern play. He’s a defensive coordinator at heart, who first landed on the national radar for being Doc Rivers’ top assistant for the 2008 NBA champion Boston Celtics. He parlayed that success into coaching jobs with the Chicago Bulls, Minnesota Timberwolves, and now New York.

Thibodeau’s methods helped the Minnesota Timberwolves snap a 13-year playoff drought in 2018, and so far, it’s working for New York. Thibodeau has always been viewed as a competent albeit inflexible sort who played his stars too much. It’s no surprise that he’s leaning on Randle to the tune of an NBA-leading 37.4 minutes per game.

The symbol of these resurgent Knicks is Randle who was just named the NBA’s Player of the Month. The No. 7 overall pick from the 2014 draft has always been solid. But when he signed with New York in 2019, it was his third team in as many seasons. Players rarely make this kind of leap this late in their careers.

Julius Randle is the first Knick to win Player of the Month since Carmelo Anthony in January 2014.

Randle is averaging a career-best in points (24.2), rebounds (10.3), assists (5.9), and three-point shooting (42.7). He’s also posting highs in advanced metric numbers like value-over replacement player (3.7) and win shares (7.6). The most staggering areas of improvement have been his shooting and passing.

Randle has gone from being one of the worst three-point shooters in the league (27.7 last season) to being one of the best. That’s not only impressive; it’s unprecedented, according to the Wall Street Journal.

The Knicks are running their entire offense through him. He’s a point forward. According to pbpstats.com, Randle ranks third in the NBA in assist on three-point shots. This is crucial, because while the Knicks don’t take many long-range shots, they’re third in three-point accuracy (39.1).

With Randle as the offensive hub in isolation plays, that has allowed second-year guard RJ Barrett (17.6 ppg) and rookie guard Quickley (11.6) to thrive. Barrett, the No. 3 overall draft pick in 2019 behind Zion Williamson and Ja Morant, has improved his shooting thanks to better floor spacing. Quickley, the No. 25 overall pick in last year’s draft, has been a real find. That has helped offset not getting much from rookie forward Obi Toppin, the No. 8 overall pick.

But the most interesting acquisition has been Rose. While he’s a far cry from the guy who won the 2011 NBA MVP with the Chicago Bulls, Rose remains effective. Since the Knicks traded with the Detroit Pistons for Rose in February, New York is 21-8. Rose is averaging 19.5 points over his last eight games.

Find someone who loves you the way Thibodeau loves Rose. Thibodeau has coached him everywhere he has been.

“We have a great trust in each other,” Thibodeau told the New York Post. “We’ve always been truthful to each other. I think that’s helped us build that trust. But he has a lot of deposits. Obviously, all the things that he’s done on all the teams that I’ve been with, I wouldn’t be in this position today without him.”

The Knicks have outscored opponents by 105 points when Rose is on the court in that span, the highest +/- on the team. pic.twitter.com/Q2kQ1LQyVr

The last time the Knicks were this competitive was the 2012-13 season. They went 54-28 behind Carmelo Anthony winning a first-round playoff series. That season turned out to be a fluke. Since the 2001-02 season, New York has only been to the playoffs four times while cycling through 11 coaches.

In the East, the three best teams are clearly the Philadelphia 76ers, Brooklyn Nets, and Milwaukee Bucks. The gap between those teams and New York is a chasm. But for the first time in ages, the Knicks will be playing meaningful basketball down the stretch.

For New Yorkers, that’s worth celebrating.