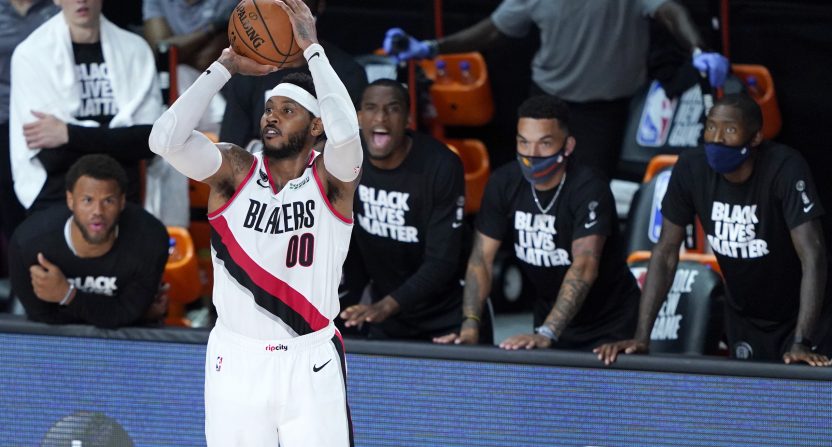 Carmelo Anthony is the aging Western gunfighter seeking one more duel. He’s past his prime, his trigger finger is slow, and the townsfolk don’t fear him the way they used to. Anthony’s game is so outdated you expect to see tumbleweeds around those 36-year-old ankles. But Anthony is still out there, looking for one last shot.

The man we had all written off is having a moment. Summertime in the NBA bubble has been dominated by Devin Booker, Luka Doncic, T.J. Warren, and Anthony’s Portland Trail Blazers teammate Damian Lillard. But no one has been better in late-game situations than Anthony. According to @statmuse, Anthony has made six threes in the “clutch” in the bubble, the most by any player (Clutch is defined as a five-point game in the last five minutes).

Anthony has helped Portland reach the NBA playoffs where the 8th-seeded Trail Blazers will take on the top-seeded Los Angeles Lakers Tuesday night. On Sunday, Anthony scored 21 points, including a late three-pointer to propel Portland over the Memphis Grizzles 126-122 and into the postseason.

Anthony’s reward: a matchup against his old pal LeBron James. Somewhat surprisingly, this will be only the second playoff meeting between the two. LeBron and Carmelo were the No. 1 and No. 3 picks respectively of the 2003 NBA Draft. That class produced four probable Hall of Famers (James, Anthony, Chris Bosh, and Dwyane Wade) within the first five picks.

James and Anthony entered with the most draft hype. LeBron, “The Chosen One” on the Sports Illustrated cover as a high schooler. Anthony, the college freshman who led Syracuse to a national championship. While both have enjoyed great pro careers, the ultimate success has long eluded Anthony. Among the top-15 scorers of all-time, only Dominique Wilkins (No. 13) and Anthony (No. 15) have never been to the NBA Finals. The closest Anthony ever got was a trip to the 2009 Western Conference Finals, when his Denver Nuggets lost to the Kobe Bryant-led Lakers 4-2.

In the NBA, you make your reputation in the playoffs. And because Anthony has not had much postseason success, he has been underappreciated.

Anthony has never won an NBA championship, but he’s the only three-time Olympic gold-medal winner in basketball.

The legacy of ‘Melo: it’s complicated.

The past few years have not been kind. While LeBron remains an annual MVP candidate. Anthony has gone from a 10-time All-Star to a journeyman. When Portland signed him last November, it was largely viewed as an afterthought. He was on his fourth different team in as many years. Since 2017, he has been traded three times and waived twice.

Anthony’s game was viewed as a relic from a bygone era. The NBA is now about ball movement, three-pointers, pace and space, and defensive versatility. Anthony is a plodding, isolation guy, and volume shooter. For Anthony to survive, he needed to adapt.

To his credit, Anthony has. Especially since the NBA restart. He arrived in Orlando slimmer which allowed him to switch to small forward. With teams focusing on CJ McCollum and Lillard, Anthony picks his spots. He can be a catch-and-shoot player. That role suits him well. Against Memphis, Lillard drove before kicking the ball out to Anthony for a corner three-pointer with 20.2 seconds left to make the score 122-116 and help seal the outcome.

Few players in the history of the league are better at creating offense and getting their own shot. He can score from the perimeter or use his exceptional footwork in the post. Even a diminished version of Anthony can be dangerous. His old friend knows that.

As pros, the James vs. Anthony rivalry spans 40 games. James has won 21 of the 35 regular-season meetings and he vanquished Anthony 4-1 in the first round of the 2012 playoffs. However, Anthony did enjoy one memorable moment.

After that game, Anthony said: “An NBA championship is what we want. Right now, at this moment — especially after coming off last year — I feel real confident about that goal.”

Fast-forward 10 years later, a familiar foe and a friend stands in his way. They remain close. Anthony said James once saved him from drowning while on vacation in the Bahamas.

Anthony has a puncher’s chance against LeBron’s Lakers. The Trail Blazers lead the NBA bubble in offensive rating at 122.5 points per 100 possessions.

“We’ve had our times, our battles,” Anthony said. “The positive thing is that we’re able to do that, compete on this level in Year 17. That’s how I look at this – to be able to go out there in Year 17, knowing the history we have, on the court and off the court. That’s the fun part for me.”

This might be the last time we see LeBron vs. ‘Melo. One more shot for a gunfighter.