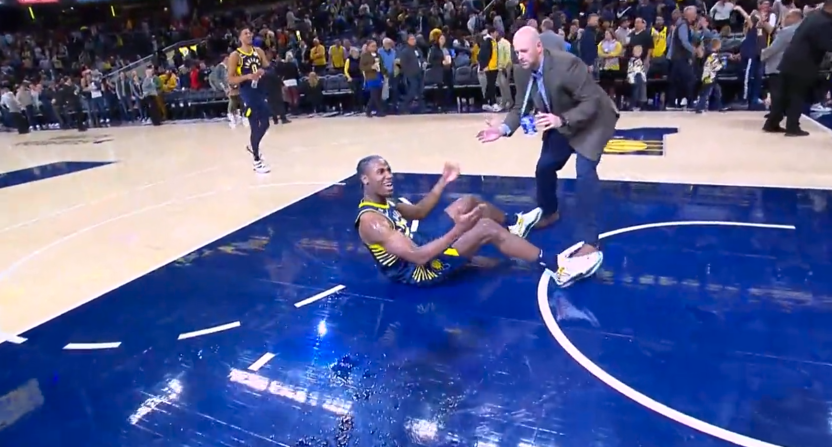 The Indiana Pacers secured their ninth victory of the season on Saturday night against the Orlando Magic. But they apparently need to work on their post-game celebrations after a dangerous incident involving Pacers guard Aaron Nesmith.

Nesmith helped the Pacers significantly off the bench, scoring a career-high 19 points in the game.

He was interviewed after the game, and teammates Tyrese Haliburton and T.J. McConnell decided to shower him with some water in celebration during his interview.

we can confirm Aaron Nesmith is in good spirits after the postgame celebration got a little wild.😅#PacersWin pic.twitter.com/CIEmASvnAX

However, as Nesmith was trying to escape the water being poured on him, he slipped on the wet court. This put an abrupt halt to the celebration and the interview, and there was some concern that he may have potentially injured himself.

Luckily it seems like Nesmith ended up escaping the incident without any injuries, but many around the NBA world got a good laugh out of this situation.

The Pacers need to work on their postgame celebration 😂😅pic.twitter.com/xlIQ0Apwfs

It’s a blessing no one was injured here during the Pacers post-game celebration 😳pic.twitter.com/JlApfP5Ouo

Man, why'd they have to do Aaron Nesmith like that 🤕

This celebration could have gone far worse than it did. Moisture on an NBA court has been known to cause injuries, and it was clear that Nesmith was thrown off initially by the incident.

It seemed like Nesmith was angry about the situation initially, but he ultimately laughed it off since it was obviously meant to be harmless.

The Pacers have been impressive thus far this season, sitting at 9-6 on the year. If they continue their winning ways throughout the season, they will certainly be going with a much safer celebration tactic after this close call for Nesmith.