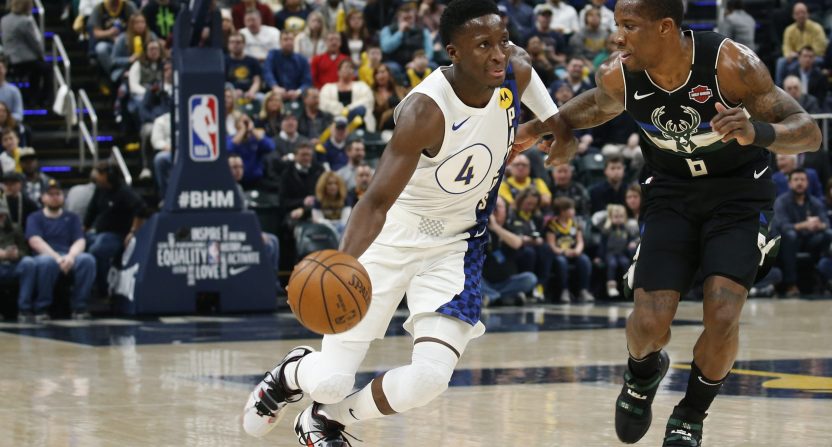 Indiana Pacers guard Victor Oladipo will not be part of the NBA season restart in Orlando. The two-time All-Star suffered a ruptured quad tendon last season, and returned to action for 13 games this season, beginning on Jan. 29. But he still wasn’t feeling 100% yet after returning from the knee surgery, and can’t get his mind to be “fully comfortable” playing in the Orlando bubble.

Here’s what Oladipo told Shams Charania of The Athletic:

“I really want to play, and as a competitor and teammate this is tearing me apart,” Oladipo said. “I feel like I’m at a great place in my rehab and getting closer and closer to 100 percent. With all the variables, from how I have to build my 5-on-5 workload back up, to the increased risk of a soft tissue injury which could delay my rehab, and the unknown exact set up of the bubble, I just can’t get my mind to being fully comfortable in playing. I have to be smart and this decision hasn’t been easy, but I truly believe continuing on the course I’m on and getting fully healthy for the 2020-21 season is the right decision for me.”

After ramping up his training in Indianapolis and evaluating with his medical staff, Oladipo opted to continue to work on his body and the repaired torn quad tendon instead of the potential significant injury risk and overall climate in the restarted season (a truncated regular season and playoffs following a four-month-plus hiatus) starting on July 30 at Disney World near Orlando.

When you factor in Oladipo’s recovery process and injury risk, and wanting to be fully healthy for the 2020-21 NBA season, it’s a very understandable decision. And that’s before factoring in the COVID-19 risk in the bubble (and being stuck in a bubble for a while), which turns it into a very easy decision for Oladipo.

Oladipo averaged 13.8 points, 3.2 rebounds, 3.0 assists, and a 12.09 Player Efficiency Rating (PER) for the Pacers after returning from injury this season. He made the leap from very good player to stardom with the Pacers in the 2017-18 season (after spending three seasons with the Oklahoma City Thunder, and one season with the Orlando Magic), when he averaged 23.1 points, 5.2 rebounds, 4.3 assists, an NBA-best 2.4 steals, and had a PER of 23.1.

As for what it means for the Pacers, well, it certainly limits their upside. This has been an overachieving group that plays hard and maxes out their roster talent. They’ve had a 39-26 record this season, good for fifth in the Eastern Conference. But when it comes to playoff time, we know it always comes down to star talent in the end, and Oladipo — at least the healthy version — is their best player (but 2020 All-Star Domantas Sabonis has certainly entered the conversation). So, it will be quite a challenge for Indiana in the bubble.

Several players have chosen to opt out of the NBA restart, but Oladipo is the biggest star to do so. Additionally, this news comes on the same day that baseball’s best player, Mike Trout, admitted that he’s considering sitting out the 2020 MLB season.

And it’s of course entirely possible that COVID-19 wipes out all of these sports plans anyway. NBA commissioner Adam Silver has already admitted that the league may abandon their postseason plan if there’s a large COVID-19 outbreak (and the numbers continue to rise).

There is growing belief Pacers star Victor Oladipo will attempt to play in the NBA’s restarted season after multiple strong team practices in Orlando, sources inside the bubble tell @TheAthleticNBA @Stadium.

Oladipo has been fully participating in five-on-five scrimmages in Orlando, and there’s now optimism around his playing status, sources say. https://t.co/bJ8OLRjmIA

So, that’s a big development. If Oladipo is able to play and be effective, the Pacers would be a dangerous team in the bubble.

UPDATE II: Oladipo played in an exhibition game for the Pacers on Thursday night, but isn’t sure about playing in the real games.

Oladipo on playing when games count: "I don't know. We'll see. I'm assessing every day. Nothing is definite…. I'll see how my body responds today. Hopefully I'll be able to play on Sunday" #PacersBlazers