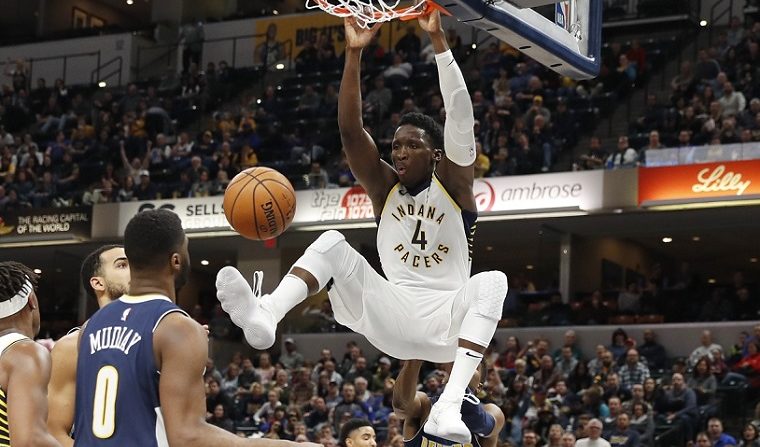 The Oklahoma City Thunder visit the Indiana Pacers Wednesday night (7 PM Eastern, ESPN). It’s Indiana’s only scheduled ESPN game of the season and before the year, that made sense. When the league and the networks were drawing up the schedule, why would the Pacers be interesting beyond the drama of Paul George’s return to Indy, potential superteam in tow?

Yet now, in mid-December and a third of the way through the season, the Pacers are 16-11, riding a four-game winning streak and currently sitting fifth in the surprisingly fun Eastern Conference. The Thunder are 12-14 and, if the season ended today, they’d miss the playoffs.

There’s plenty of time left, of course, and both teams could see their fortunes change. But as of now, it’s hard to believe the current reality when you look back at the summer storylines surrounding the trade that will define the Thunder this season, and will define the Pacers for years to come.

A few months in, one thing is absolutely true, even though it flies in the face of everything said at the time: The Pacers won the Paul George trade.

When Paul George forced his way out of Indianapolis this summer, he did it in a way that left Pacers general manager Kevin Pritchard with limited options.

George’s agent had made it known that his client wasn’t going back to Indy, but waited until after the NBA Draft to do so. And as we later learned, the Lakers had been in contact with George’s camp in violation of NBA tampering regulations. The Celtics went back and forth with a rumored package, but in the end they wanted to wait on Gordon Hayward’s decision. The Pacers declined to wait and Kevin Pritchard pulled the trigger on the deal with Oklahoma City: Paul George for Victor Oladipo and Domantas Sabonis.

The NBA trade grade feedback machine whirred to a feverish start, and spat out plenty of variations on one singular theme: The Pacers were fleeced.

Given what else was out there, this is a disappointing return for Indiana and new president Kevin Pritchard, even with the Pacers negotiating from a position of weakness.

ESPN’s great Kevin Pelton, while giving the Thunder an A and the Pacers a D-:

Yes, George’s agent telling the Pacers he planned to sign with the L.A. Lakers as a free agent next summer and wouldn’t remain in Indiana no matter what put the team in a tough position. No, we don’t know what other offers were out there for George, who might not have had the value as a rental that his ability on the court would imply.

Nonetheless, to come away with a package similar to but worse than the one Oklahoma City got for Serge Ibaka last summer (when Ibaka was entering the final year of his contract) is a failure, as I see it.

SI’s Ben Golliver, who gave the Thunder an A- and the Pacers a D:

But Oladipo, a former Indiana Hoosier, is neither good enough to inspire hope as a lead option nor cheap enough to receive the benefit of the doubt. The George-less Pacers will need him to step up in a big-time way, a development that seems unlikely given his fairly forgettable sidekick season alongside Westbrook. Sabonis (5.9 PPG, 3.6 RPG) similarly projects as a useful, skilled big but not much more.

James Herbert for CBS Sports, grading it an A+ for OKC and a D- for Indy:

You get the idea.

There were a few dissenting voices, who pointed out that if there were truly better offers available, Indiana likely would have taken them:

I like Oladipo, and I tend to agree with this. https://t.co/iQwy0N0GM0

But once the Thunder added Carmelo Anthony, the narrative had fully taken shape: The Thunder were potentially a superteam, while the Pacers and Knicks had been taken advantage of by Thunder GM Sam Presti.

And while that’s a nice little nugget of information, it ignores a few key facts. Namely, the Thunder traded four years of Victor Oladipo (making, yes, a decent amount of money: $21 million per season) and three years of Sabonis (on a rookie contract) for one year of Paul George. That’s it.

For the Thunder, it was a risk worth taking. Their endgame was convincing Russell Westbrook of their commitment to winning, and Westbrook ended up signing a monster extension, likely in part due to this contract. Paul George could re-sign, but it seems unlikely given everything we know. Carmelo is, well, kind of bad now, and old, and making a ton of money. (There’s a decent argument that they’d have been better standing pat after the George trade, but whatever. Oh, and the Knicks are above .500 too, unburdened from Melo’s brand of ball-stopping offense.)

But for the Pacers, it’s worked out better than perhaps even they could have imagined.

The salary cap works differently for every franchise. As a smallish-market team, the Pacers had less to lose by taking on Oladipo’s contract. They just saw a homegrown superstar player spurn their max-extension offer, and Indiana is never going to get meetings with LeBron or Durant.

That means their path to contention is, by necessity, going to look different. They don’t need to worry about keeping a max-level slot open heading into the summer. Knowing you’re not going to attract that kind of talent is certainly not the ideal scenario. You’d rather have the opportunity to land players at that level, obviously. But in a few very real ways, knowing you have no chance is better than swinging and missing year after year, as we’ve seen with a team like Dallas.

The Pacers were freed up to attack the middle of the free agent market, which they did this offseason, bringing in solid mid-level signings like Cory Joseph (26), Bojan Bogdonavic (28), and Darren Collison (30). Lance Stephenson (27), signed at the end of last season as a last-ditch effort to appeal to Paul George, is still around, and he’s rediscovered a bit of his old Indy magic.

The Pacers also have Myles Turner, who missed a stretch of games early in the season with a concussion. Turner is just 21, a full two years younger than everyone’s Eastern Conference darling Joel Embiid, but he can do things like this:

What a move! MT ties it up with a nifty move to the net.

Tune in now on FSI and FSGO. #Pacers pic.twitter.com/A6P8yFNZuw

Turner is also shooting 35% from deep, while hitting nearly 50% of his two-point shots. He’s the kind of growth asset Larry Bird built a successful GM career out of finding: late lottery hits. Before the season, the long-term success of the Pacers looked likely to hinge on Turner’s development. And while he’s played well, and still has a star-level ceiling, it’s looking like another Pacer now might be Indiana’s key player.

That’s because Victor Oladipo has been absolutely amazing. His 47-point outing against the Nuggets is just the latest in a string of games that have Oladipo positioned as a likely lock for the All-Star Game. He is just 25, and putting up easily the best season of his career, greatly increasing his efficiency while also greatly increasing his usage. How good has he been?

Well, let’s compare him to another of the NBA’s best wing players, just as an example:

And if you want an advanced look:

Oladipo is putting up a career-high in true shooting percentage despite his increased usage, and nailing threes at a 44% clip, eclipsing his previous high (set last season) of 36% despite averaging an extra attempt per game. (He’s essentially taking and making an extra three per contest.) Combined with his above-average defense in Nate McMillan’s surprisingly disciplined scheme, and you have what could be a star player.

Are there caveats? Absolutely! 27 games is 27 games. Oladipo might very well regress from behind the arc, and you’d perhaps even expect that to happen. But Oladipo has a precedent for making a shocking leap in shooting ability. In college at Indiana, he shot just 20% from the college three-point line as a sophomore. As a junior, he shot 44%, nearly winning the Wooden Award and vaulting from a borderline prospect to the No. 2 pick in the draft.

But even if Oladipo’s production slips, or Paul George’s production improves as the Thunder become a more cohesive unit, the Pacers still won the trade. They turned one year of a player into multiple useful assets. The Thunder, meanwhile, have already burned one-third of what they paid for.

What the Pacers have done in the span of one offseason is remarkable. Of their top nine rotation players, six were added this offseason. A team that had issues with athleticism and guard play added Oladipo, Joseph, and Collison. Depth issues down low? Enter Sabonis and rookie first-round pick T.J. Leaf. Dearth of shooting? Here’s Bojan Bogdanovic. Indiana has integrated these pieces into a cohesive unit very quickly, despite the newly-condensed training camp schedule.

To cap it all off, they’re in great shape going forward to either keep the core together, if they finish the season strong, or continue to make tweaks, if necessary.

Kevin Pritchard saw problems, addressed them via multiple avenues, and now the Pacers are reaping the reward. He deserves to take a victory lap like this one:

With all the success Victor Oladipo's been having in Indy, Pacers' Kevin Pritchard went back and liked an old tweet ? pic.twitter.com/Di1nJ5NXYT

Maybe he’ll take a literal one if the Pacers take down the Thunder on Wednesday.