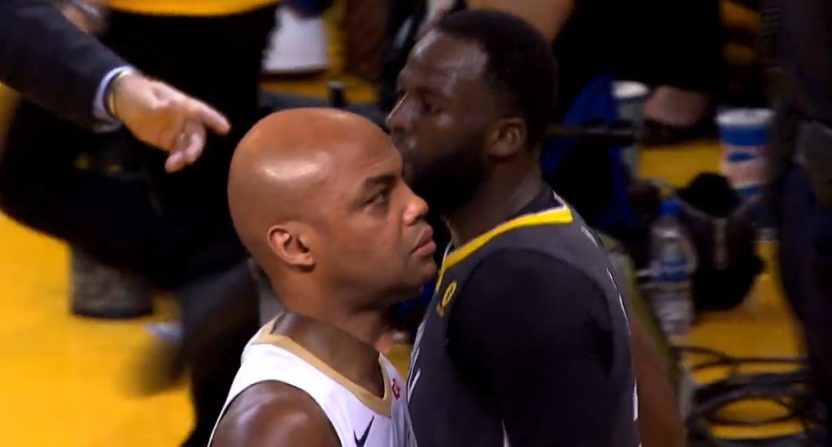 TNT’s Inside The NBA is known for its unique brand of commentary on everything from to gas prices to catfish, but it took an unusual step even for that show Tuesday with Charles Barkley saying outright he wants someone to punch Draymond Green in the face. That came after they showed a clip of Green jawing with Rajon Rondo:

It’s not every day you hear a national panelist say “I just want somebody to punch him in the face. …I’m just telling you, I want to punch his ass in the face, I do.” Barkley’s sip of water during the middle of this is great, too, channeling the Kermit-sipping-tea meme. (Or #TeaLizard, if you’re GMA, but that’s none of my business.) And this led to some praise from rap legend Chuck D, which in turn led to the Inside The NBA cast rapping Public Enemy’s “Bring The Noise”:

And later, this led to further memes, including a GIF of Barkley fighting Godzilla from a 1992 Nike ad (yeah, that happened):

Chuck vs. Draymond!! Got to see this!! @NBAonTNT pic.twitter.com/S87bIf61jH

That meme was then shown on air, as was a photoshop of Barkley’s head onto Rondo’s body:

We don’t know exactly why Barkley wants to punch Green, but him saying that he wanted to certainly brought some humor to basketball Twitter. And who knows, maybe Green can be a villain in the Barkley, Shut Up And Jam: Gaiden sequel. (If that ever sees the light of day.) For now, though, we’ll always have that photoshopped image of Charles Rondo. And on a night with several NBA fights, this might have been the funniest of them all.

Here's what Draymond said before he went to the podium about Barkley's "punch him in the face" comments: "He's seen me a lot in my life. If he feels like that about basketball, then he can do it in real life. …

More Draymond: "He's seen me enough. So if he feels that strongly right now, then he must feel that way when he sees me. So when he sees me, he should punch me. If not, then he should shut up." Similar to his podium comments.

Some of what Draymond said after his podium statement: "I think it's pretty sad. It's probably something that needs to … when you look at the president of TNT, David Levy, which I know well, it's kind of embarrassing on their behalf …

More Draymond: "I'm an employee of the NBA, he's an employee of TNT. And you have your biggest sponsor, one of the faces of that company, saying that on national television. That's embarrassing for them. So that's something — a problem that they have."