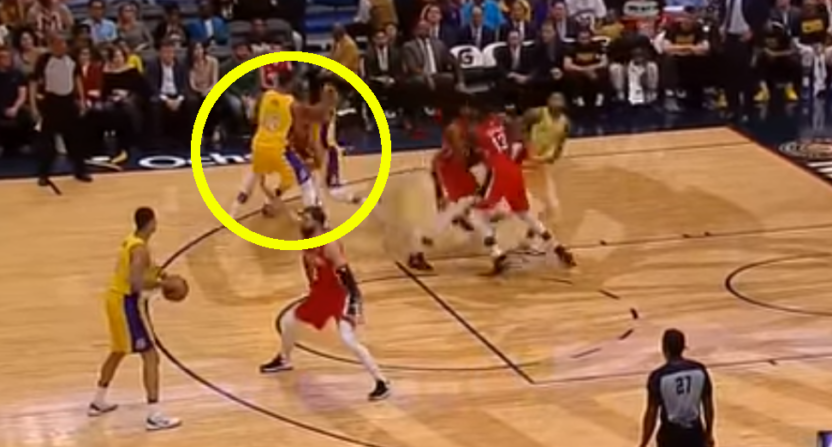 The NBA can be delightfully petty at times, and the latest example of that may be the feud between Isaiah Thomas and Rajon Rondo. Both used to be point guards for the Boston Celtics, and that led to Rondo throwing shade at Thomas last month over the discussion around the Celtics planning to air a tribute video for Thomas’ return and the opposition that got from the likes of Paul Pierce.

Rondo and Thomas met on the court for the first time since then Wednesday, with Thomas’ Los Angeles Lakers facing Rondo’s New Orleans Pelicans, and both players were ejected following a first-quarter fight. And Thomas later said that was over further discussion of the video tribute (which never actually happened, because Thomas asked the Celtics not to do it once it sparked controversy).

And here are Thomas’ post-game comments to Tania Ganguli of The Los Angeles Times:

“He kept bringing up the (video) tribute when I was the one that shut the tribute down.”

“My team beat his team in the playoffs last year. Maybe that is what’s wrong.”

“For me to be ejected was uncalled for.” pic.twitter.com/TUZkzkoYAR

It’s amazing that two NBA players would get ejected over a fight involving a team neither of them is currently on and its video tribute policies. Rondo has played for four teams since leaving Boston (the Mavericks, Kings, Bulls and now the Pelicans), while Thomas has played for two (the Cavaliers and now the Lakers). And that Thomas would bring up the Celtics, a team he is not currently on, beating the Bulls, a team Rondo is not currently on, in last year’s playoffs.

But Rondo did start all of this by going after Thomas last month (again, while neither of them was on the Celtics):

Rajon Rondo was irked to hear that the Celtics would honor Isaiah Thomas on any night. "What has he done?” Rondo asked. Told that he led the Celtics to the conference finals last year, Rondo remarked, “Oh, that’s what we celebrate around here?”

More Rondo on IT: “This is the Boston Celtics. This isn’t the Phoenix Suns, no disrespect to any other organization, but you don’t hang conference titles. Do we hang going to the conference finals? What do we hang here?”
Title banners, Rondo was told.
“OK, cool,” Rondo said.

And this is far from the first time Rondo’s gone after other ex-Celtics. It’s just quite funny to see it lead to a fight and ejections when both players are so far removed from the team the argument’s about.