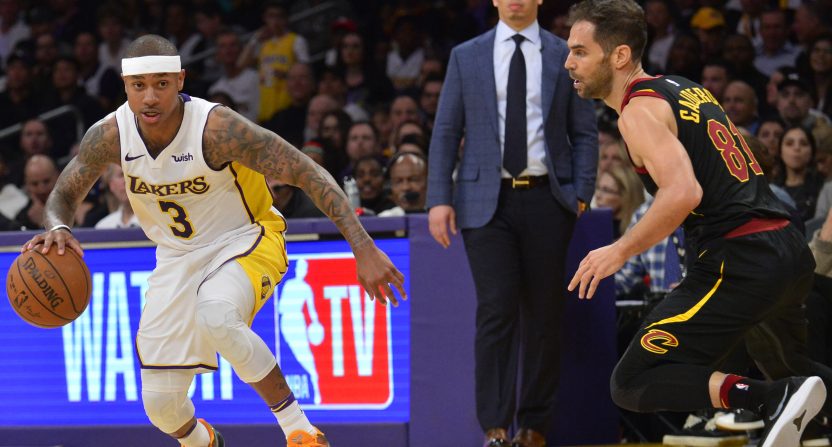 Isaiah Thomas was remarkable for the Boston Celtics in 2016-17, averaging 28.9 points and 5.9 assists and finishing fifth in MVP voting. But Thomas was then traded to the Cleveland Cavaliers in a deal that was essentially a swap for Kyrie Irving, and things went terribly for the guard in 2017-18. Thomas averaged 15.2 points per game and had just a .373 field goal percentage (down 90 points from the previous year), and was dealt to the Los Angeles Lakers at the trade deadline.

Last July, Thomas said he deserves a max contract and that the Celtics would have to “bring the Brinks truck out” to sign him to an extension. And he was absolutely deserving of such a contract then. But after his brutal 2017-18 season, he’s unfortunately found himself having to settle for the veteran’s minimum with the Denver Nuggets on a one-year deal.

Free agent guard Isaiah Thomas has agreed to a one-year deal with the Denver Nuggets, league sources tell ESPN. Thomas will reunite with Michael Malone, who coached him with the Kings.

This is pretty rough, and Bleacher Report’s Sean Highkin put it well:

Isaiah Thomas talking about backing up the Brinks truck after an All-NBA year and then signing for the minimum a year later is why no one should ever begrudge these guys trying to get as much money as they can while it's in front of them.

Thomas is only 29, so he has the opportunity to re-establish his value and get paid next offseason. As ESPN’s Adrian Wojnarowski tweeted, Denver’s head coach is Michael Malone, Thomas’ old coach with the Kings. So the familiarity and comfort could help bring out the best of Thomas, and without the pressure he faced in Cleveland.

Clearing out the Kenneth Faried and Darrell Arthur contract saves Denver a combined $43M in salary and projected luxury tax. The Nuggets now have 14 players on guaranteed contracts and are now $8.7M below the luxury tax. Denver this offseason has saved… https://t.co/DcFNG7qhB1

And then the Nets made another move, by trading veteran point guard Jeremy Lin to the Atlanta Hawks.

An out-of-nowhere busy late Thursday night in the NBA.