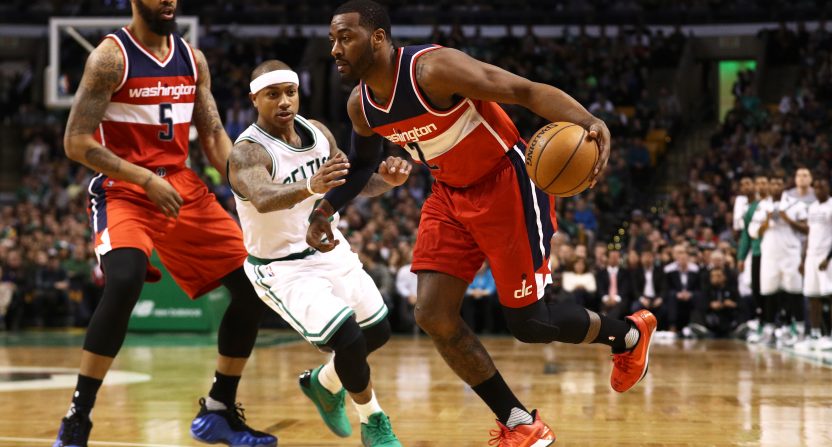 On Friday night, in a pair of NBA Eastern Conference Game 6s, the Wizards beat the Hawks and the Celtics beat the Bulls, giving both teams a berth in the next round of the playoffs.

Next up, Washington and Boston will play each other, in what should be a fun and competitive series, highlighted by a clash of under-appreciated point guards: John Wall and Isaiah Thomas.

It may seem odd to call Wall and Thomas under-appreciated given that they’re both beloved in their home cities and have both been All-Stars. But given that they’re on Eastern Conference teams with limited national exposure, it does seem they don’t always get their due. While NBA fans everywhere argued about Russell Westbrook, James Harden, Kawhi Leonard and LeBron James, Thomas (28.9 ppg on 46.3 percent shooting) and Wall (23.1 ppg, 10.7 apg) quietly established themselves as down-ballot MVP candidates.

Wall and Thomas have both had slightly uneven paths to stardom. Thomas was the very last pick of the 2011 NBA Draft and had to suffer through three seasons with the dysfunctional Kings and half a season coming off the bench for the Suns before arriving in Boston. At 5 feet 9 inches, he’s one of the smallest players in the NBA and maybe the league’s most unusual star.

Wall was the No. 1 pick in the 2010 draft, but he’s endured endless questions about everything from his jump shot to his leadership ability to how growing up without a father affected him. For years, a prominent narrative around D.C. held that Wall wasn’t quite good enough to carry a top-shelf team.

And yet here they are. Without question, Wall and Thomas are top 10 NBA point guards, and it’s not too tough to argue they’re both in the top 5, along with widely admired superstars Steph Curry, Westbrook and Chris Paul.

Plus, they’re both exceptionally fun to watch. Thomas looks like a little brother out on the floor, but he reliably converts on one improbable basket after another. Wall, on the other hand, might be the most athletic player in the league (ok fine, other than Westbrook), and no one runs a more exhilarating fast break or slashes to the basket with more grace.

Wall and Thomas may not guard each other much in the upcoming series, but at the end of any close game, they’ll be the ones with the ball in their hands. Maybe one of them will graduate from the type of star basketball fans rave about to the type of star everyone in America knows and admires.

Regardless, this series should extremely fun—thanks largely to the two guys handling the ball.