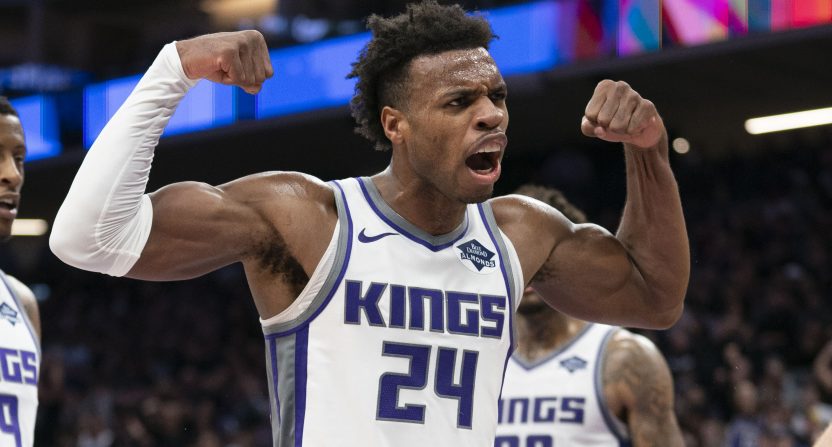 On Monday, Sacramento Kings guard Buddy Hield turned 25. Or so everyone thought. Every media outlet had the former Oklahoma star’s birthday listed as Dec. 17, 1993. Even the NBA official website had Hield listed as 25.

Well, Monday was indeed Hield’s birthday. But it was his *26th* birthday.

“That’s their fault, not my fault,” Hield said when asked why everywhere, including the NBA’s website, has him listed as 25. “The first time I saw it on Wikipedia, my mom said, ‘Why do they have your age wrong?’ I said, ‘I have no idea.’ ”

Born in Freeport, the main city on the island of Grand Bahama, Hield came to the U.S. with identification and, according to the Kings star, all of it has the correct date.

“I came over with a passport,” Hield said. “My passport has 1992 on it. My driver’s license has 1992 on it. I just think people got their information from Wikipedia or wherever, and they just went with it. They just got it wrong.”

So, that’s something, and it leads to this obvious question: were the *Kings* aware of Hield’s actual age?

Hield told NBC Sports Bay Area that the Kings were indeed aware of his age, and Sacramento general manager Vlade Divac confirmed that the organization had the correct birthdate.

“I gave them [the Kings] my passport, Peja [Stojakovic] and Vlade [Divac] know what age I am,” Hield said. “That’s the only thing that matters.”

When reached for comment, Divac confirmed the team has Hield’s birth year as 1992 — the same as Bogdan Bogdanovic. The Kings general manager isn’t sure where the incorrect date came from, but he’s confident the team has the right information.

Then there’s also the question of how this impacts Hield’s perceived value and future contracts (he’ll be 27 as a restricted free agent after the 2019-2020 season). But he’s an ascending talent and putting together his best NBA season so far in the 2018-19 campaign.