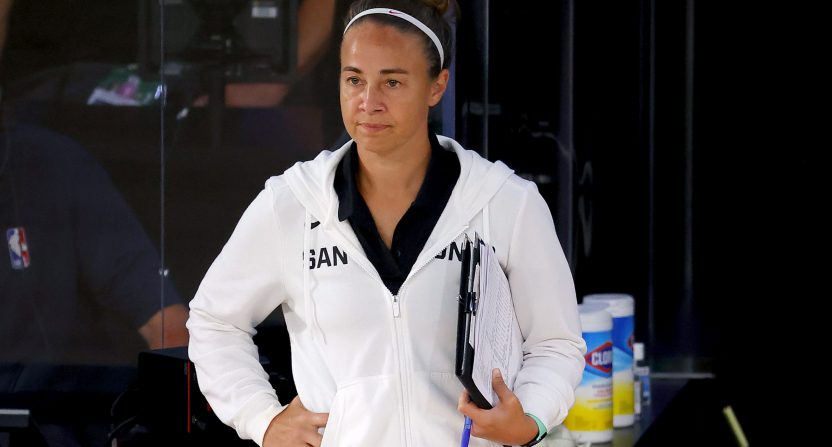 When the Portland Trail Blazers hired Chauncey Billups, much of the criticism around the hire was based around a 1997 sexual assault allegation placed against him. In addition, it was reported that Damian Lillard wasn’t happy with the potential hiring that there was a possibility Lillard would push for a trade.

Many people had an issue with Billups being hired due to the allegations but another reason was because of who they didn’t hire.

Hammon was the name that jumped out among the public. Not only because she’s been an assistant coach with the Spurs since 2014 but if hired would become the first woman full-time head coach of a team in the big four American pro sports leagues.

People have praised Hammon’s work, she took on head coaching duties for a Spurs game this past December, and even Hammon has said she’s ready to be a head coach for an NBA team. But once again, she’s being passed over for someone else. Hammon is also interviewing for the Orlando Magic job but Memphis Tigers head coach, and former Magic legend, Penny Hardaway is reportedly the lead candidate.

After being an assistant for seven seasons under one of the greatest NBA coaches of all time, Hammon is ready for the next step. So why isn’t anyone willing to hire her?

Could it be that Hammon is waiting for Gregg Popovich to retire and takeover the Spurs? Perhaps. Popovich is 72 but it’s not a guarantee that A) Popovich will retire anytime soon and B) Hammon would be his successor. That’s kind of why she’s interviewing for other head coaching positions in the first place.

Could it be that teams are afraid to differentiate from the norm even if there’s a good chance they’ll see better success if they deviated from that norm? That’s certainly a consideration. It wouldn’t be the first time a sports team stuck with what they were comfortable with or what they felt the public would accept instead of taking a risk and breaking out from the pack.

What could be the reason Hammon isn’t getting hired is that teams can have their cake and eat it too when they’re interviewing her. It’s still a big deal when Hammon, or any woman, is getting interviewed for a head coaching job and teams like the Trail Blazers and the Magic can get positive PR and brag about interviewing a woman to be their head coach without actually hiring her. This isn’t to say that teams should just hire a woman to be a head coach because she’s a woman, but Becky Hammon has more experience than some of the people being appointed head coach. That includes Billups, who only became an assistant coach in 2020, six years after Hammon joined the Spurs.

The solution is that teams shouldn’t get praise for just interviewing a woman to be their head coach anymore. We’ve given these teams empty PR points when they didn’t actually do anything. Again, it’s important to actually hire someone who will be an appropriate fit for the team instead of just hiring a woman for the sake of hiring a woman but someone has to give Becky Hammon a chance because she’s good enough and has enough experience to be a head coach for some team. And when they do, then that team will receive the praise we once gave to teams for doing the bare minimum.