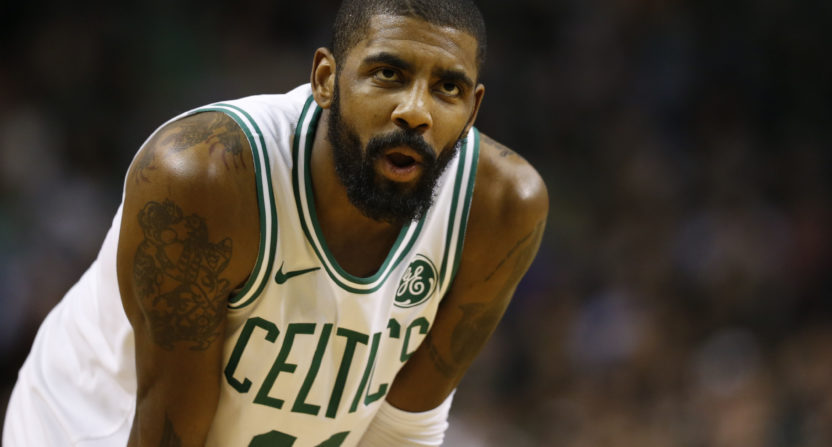 At first, Kyrie Irving’s conspiracy theorizing was kind of amusing, even while being disconcerting at the same time. When the then All-Star point guard declared last winter that he believed the Earth was flat, it was easy to laugh it off as harmless babbling from someone who has been accused of fake-deepness once or twice.

But a year later, Irving is still spewing conspiracy theories, and… it’s probably time for him to stop.

Kyrie’s latest nonsense came on an episode of The J.J. Redick Podcast, where he discussed his flat-Earth theory and also alluded to chem trails, nodded along with Redick’s skepticism about dinosaurs and hinted that he believed 9/11 could be an inside job.

The conversation began with Redick asking Irving about his original flat-Earth comments. Irving’s response, as transcribed by Yahoo’s Ben Rohrbach (who deserves hazard pay today) was patently absurd. It was genuinely unclear whether he was walking away from his belief in a flat Earth or doubling down on it, but either way he made clear that Instagram had played a large role in his “education.”

BREAKING: Kyrie Irving, on JJ Redick’s podcast, reveals that his flat-Earth theory came from his dutiful research on … Instagram.https://t.co/YeeSygcGFr pic.twitter.com/4r9qK8lmnD

At that point Redick, as the non-lunatic in the room, could have ended the conspiracy talk and moved on to another subject. Instead, he offered this:

Redick then described his “evidence” for why dinosaurs might not have existed, which we will not transcribe here for fear of making you dumber. Irving, to no one’s surprise, concurred with Redick’s analysis, then launched into some thoughts that we at The Comeback do not exist on a high enough plane to understand.

“I’m with you on that. People think it’s like an idea. When you actually follow that idea and back it up with research of your own, you’re almost like convincing yourself that this didn’t happen. … Then you get to this point, and then the flip side is the separation that is created between you and people who think different things.

Amid banter over other conspiracy theories, including some not-so-subtle suggestions about 9/11, Kyrie submitted this gem:

I just want it to be done with. Just give me the truth and humans could just move on and there wouldn’t be a conspiracy behind it.

Dude, it is done with. The world is round, dinosaurs existed, and 9/11 was not an inside job. That is the truth.

The best part of the whole interview came when Kyrie said he was offended by a Taco Bell commercial about the illuminati.

Kyrie: I’ve been seeing the all-seeing eye for about six months now. Like, all the time. People just naturally have been afraid of it. They don’t know what it means.

Yeah, we don’t know what it means either.

The segment finally ended with… whatever this is:

Kyrie concluded the conspiracy theory portion of JJ’s podcast with this, and I have converted. Jim Carrey is our spirit guide now. pic.twitter.com/jUzLbt01X3

Here is the full podcast. Be warned, it might lower your IQ.

Look, Kyrie Irving believing dumb stuff is not the biggest problem facing the world. But at risk of going all Nancy Grace on you, there are a lot of impressionable people out there, including children, who very well might start believing this stuff because Kyrie Irving found it on Instagram. It’s really not funny anymore.