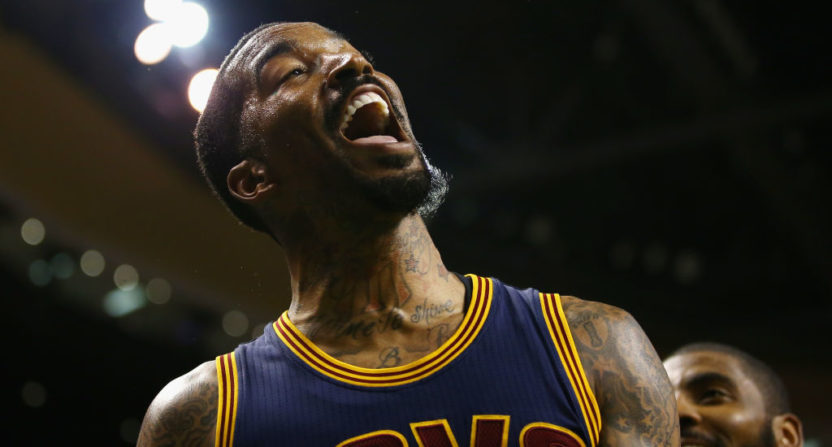 Former NBA superstar Tracy McGrady is making waves for his comments after it was announced he would be inducted into the Basketball Hall of Fame. McGrady had a great NBA career that spanned 15 seasons in the Association. He made seven All-Star Games and led the league in scoring twice.

But if there’s one big hole on McGrady’s resume, it’s in his postseason success… or lack thereof. McGrady infamously made it out of the first round of the playoffs only once in his career, his last season in the league with the San Antonio Spurs in 2013. The Spurs advanced to the Finals that year, but McGrady was only a bit part role player, appearing in just 6 postseason games and averaging 5 minutes per game.

McGrady is in a class of players who put up big stats over the course of their careers, but for one reason or another never got the job done in the postseason. It doesn’t seem to bother him all that much though as he’s ready to enter into the Hall of Fame.

McGrady was speaking to a group at the Hall on Friday and threw some shade at those players that aren’t quite at the superstar level, but still won a championship. Here are his comments via MassLive.com.

“Social media can give a lot of people voices these days, and the first thing they say is ‘No rings, no rings,'” McGrady said on Friday, in an appearance at the Hall of Fame’s 60 Days of Summer Program. “You have to have a great team and some luck to get a ring, right? Unfortunately, I wasn’t blessed with that. But I go back at them with this: Anybody can win a championship. Everybody can’t get in the Hall of Fame.”

Those comments weren’t lost on someone who just won a championship last year, Cleveland Cavaliers guard J.R. Smith. The prolific shooter went to Twitter to express his bemusement for McGrady’s comments about just “anybody” being able to win a ring and even said he’d fight McGrady if they were on the same team.

This man really said "anyone can win a ring but not everyone can make it to the Hall Of Fame?" Soooo no one else thinks that dumb as hell???

FACTS!! People who did nothing make the hall!! If it was like MLB ok but Basketball hall a fame you can build a park an get in!! https://t.co/0gEkFoQ7hN

So you played for the Hall an not to win. If I was on his team we fighting idc if we don't play no more. Don't waste my time. Not wit hoop!

Is now a good time to tell J.R. Smith that Adam Morrison has not one but two championship rings?

Ok, so obviously not “anybody” can win a championship as you at least have to have enough talent to make an NBA roster. It’s easy to jump all over T-Mac, especially with how he struggled in the postseason, but he does have a point, doesn’t he? Being enshrined in the Hall of Fame is a pretty significant honor as a player and a lot more people are going to remember McGrady and his career than Will Perdue and his four championship rings, right?

The most interesting element here might be what Smith would think of his own teammate (at least for now) in Kyrie Irving. Wherever Irving goes it’s almost a guarantee that he’s not going to have as good of a chance to win an NBA title not playing alongside LeBron James. If J.R. Smith is sending subliminal message to the Cavs’ want away point guard, it’d be just another day in the life of this weird NBA offseason.