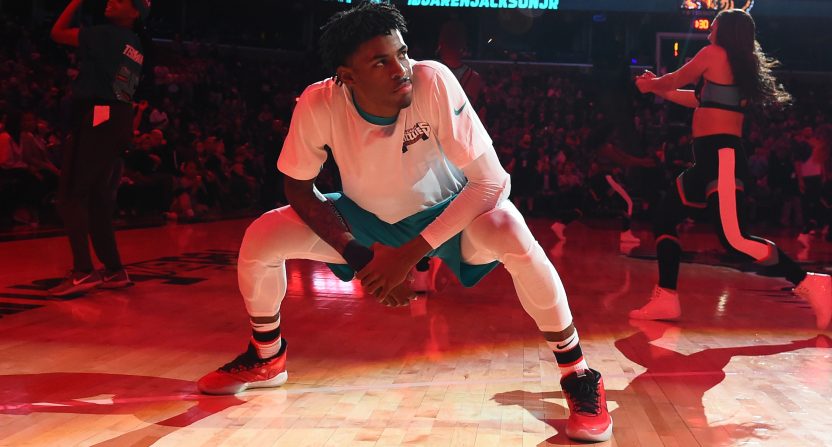 Ja Morant is the NBA’s Hollywood stuntman, fearlessly putting his 174-pound body at risk for a basket, a thrill, and a paycheck. It’s one thing to repeatedly throw yourself into the paint in the Ohio Valley Conference. It’s another to ignore danger by doing so in the pros where defenders may outweigh you by almost 100 pounds.

The Memphis Grizzles’ guard is not going to change his kamikaze ways.  It helped make him the second-most exciting player in college basketball last season (behind Duke’s Zion Williamson). It also helped make him the second overall pick in the draft (again, behind Williamson). Now with Williamson out indefinitely, Morant might be second to none in the league’s Rookie of the Year race. He’s the betting favorite to win the award. The only thing that has slowed him down are back spasms. Morant has missed the past two games and the Grizzles are calling the situation “week to week.”

Here’s hoping he’s back soon. A 2019-20 NBA season without Williamson AND Morant is no fun.

Morant became one of three players in NBA history to record at least 30 points and nine assists (30, 9 vs. Brooklyn Nets) within his first three games (joining Isiah Thomas and Trae Young). Over his first seven games, he averaged 20 points and five assists, while shooting 50 percent from the floor. The only other guy to do that: Michael Jordan (1984).

Hits the game-tying bucket, then blocks Kyrie to send it to OT‼️ pic.twitter.com/wTncKTuHEm

Morant’s most memorable NBA moment so far was his game-winner at Charlotte. Morant did what he does best: go right into the paint and contort his body through defenders to score a pivotal basket with 00.7 seconds left. Great players find a way to score against good defenses.

“That’s my game,” Morant said. “I’m not changing it at all. I still go in and finish plays. I’m going to continue to do it. Put pressure on the defense.”

Memphis coach Taylor Jenkins wishes his young point guard would play a little less dangerously. At Indiana last month, he crashed into a cameraman when pushing the pace for a fastbreak attempt. That’s when Morant originally suffered his back injury which he later aggravated.

“He has an aggressive mentality,” Jenkins said. “He is figuring out how to finish against NBA length and size. He still goes in there thinking it is NCAA competition when he is throwing his full body in there. He is learning how to protect himself and how to avoid contact.”

Morant has a chance at finishing with a better first season than last year’s Rookie of the Year winner and current NBA sensation, Luka Doncic (19.6 PER). Against the Los Angeles Clippers (one of the NBA’s better defenses), Morant was held scoreless in the first half, but still found a way to dish out eight assists. He exploded in the second half to finish with 20 points.

Clippers coach Do Rivers was an NBA All-Star point guard and has seen his fair share of great guards. He compared Morant’s style to a “video game.”

“Love him,” Rivers said. “Love watching him. Fearless. I like how he attacks. I like his speed. I like that he’s a scorer but also a very good facilitator as well. Got some toughness to him.”

Assuming Morant returns healthy, he’ll have quite a lead on Williamson for Rookie of the Year honors. Williamson and Morant will be forever tied together because of their college careers and draft positions. However, Williamson dominated at Duke and was well-known as a high schooler. Morant was on no one’s radar until his breakthrough sophomore season at Murray State. He came out of nowhere to establish himself as a star.

Memphis hopes he can become its franchise star. The Grizzles have had Pau Gasol, Marc Gasol, Zach Randolph, Mike Conley, and Shareef Abdur-Rahim. All great players, but the Grizzles have only advanced to the Western Conference finals once. They were swept by the Spurs in 2013.

Memphis is not a free-agent destination. It must rely upon player development. That’s why Morant’s success is so important. The Grizzles have the second-worst record in the West, but this season is all about Morant. If he eventually becomes an All-Star and helps the team improve, it’ll help to attract other players.

The NBA needs its top stuntman in the playoffs as soon as possible.