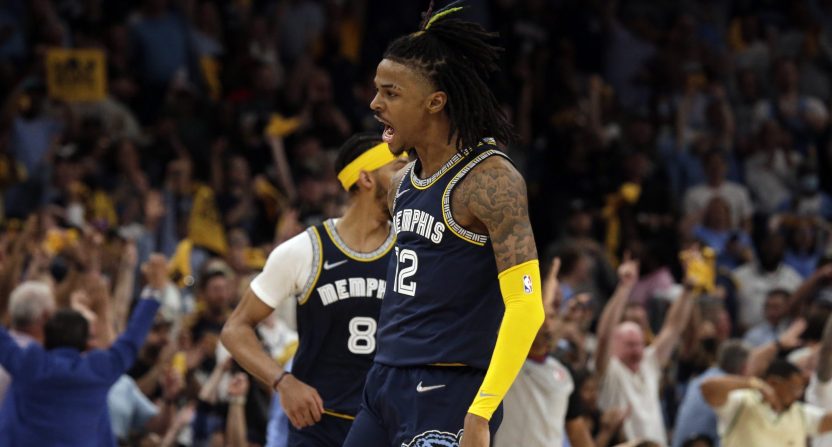 Game 3 of the second-round matchup between the Memphis Grizzlies and the Golden State Warriors has certainly gotten the NBA world talking.

The Warriors beat the Grizzlies rather comfortably, but the talk surrounding the game was about Grizzlies star point guard Ja Morant’s early exit in the fourth quarter.

Morant’s exit had some controversy after Morant accused Warriors guard Jordan Poole of injuring his knee on this play, where it looks like Poole grabs Morant’s knee.

Morant tweeted about the play following the game, saying that Poole “broke the code” on that interaction.

Regardless of whether or not the injury happened on that play, the injury is extremely worrying for the Grizzlies.

Game 4 is set to take place on Monday night, and Grizzlies head coach Taylor Jenkins discussed Morant’s availability where he said that Morant is “likely to miss” Game 4 against the Warriors.

This could be a devastating blow for the Grizzlies, who are currently down 2-1 in the series ahead of an ever-important Game 4 matchup.

Jenkins’ admission has many around the NBA world giving the Grizzlies very little chance of winning on Monday night.

Warriors gotta go for the kill tomorrow and stick a fork in these guys https://t.co/5P3C0MlN0n

Memphis was 20-5 this season without Ja Morant, but no doubt this would be a major blow. https://t.co/wPg1pUrctX

Storyline all year was how good the Grizzlies were without Ja so let’s see how they do when it matters https://t.co/AOnOCcSCE7

Time for the regular season “without Ja” Grizzlies to show up in game 4 https://t.co/hAKWnD0VQ2

It cannot be understated just how important Morant has been for the Grizzlies.

While their record without Morant in the regular season is impressive (20-5), losing any borderline MVP candidate in a crucial game of a playoff series is certainly a terrible loss for any team.

The Grizzlies will hope to get Morant back at some point if they want to have a serious chance to take down the Warriors in round 2.