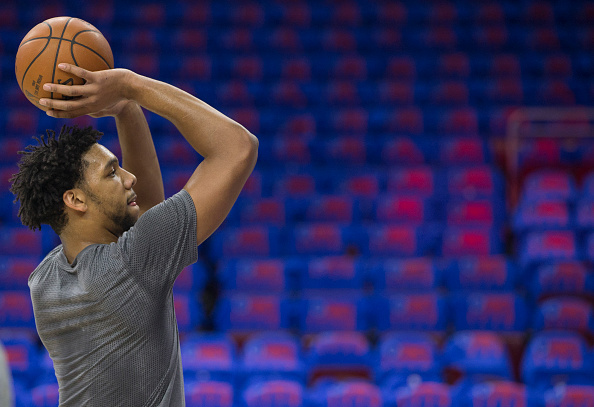 Take away his fame, just for a second. Take away everything that makes Jahlil Okafor Jahlil Okafor and make him Just Another Person. Now, look at the incidents he’s been involved in in the past few weeks: driving 108 miles per hour, trying to use a fake ID and getting into two fights on the same night. What you have are the actions not of a menace, but of a 19 year old doing typical, stupid – incredibly stupid – 19 year old stuff. Let he who was without adolescence throw the first haymaker.

This is not to make light of Okafor’s incidents, especially the fighting. Knocking someone out cold is wrong, bloodying their face is wrong. The Sixers suspended Okafor for two games yesterday, and they probably should have done it after the first video came out. If the league decides to take action and fine him or suspend him further, that wouldn’t be surprising or out of line, either. Yet some consideration must be given to the characters and context.

If this had been a random fight between a seven foot giant and a normal-sized human being, it’d go viral. We’d see click-bait headlines run rampant across the web. “This Dude Taunts a Seven-Foot Man Outside Of A Nightclub. You’ll Never Guess What Happens Next.” “Watch What Happens When A Guy Tries To Pick A Fight With A Guy Three Times His Size.” “GIANT KNOCKS THIS GUY THE F*CK OUT.” It’s as Pablo Torre tweeted: “Jahlil Okafor opted to make a statement to anyone who assumed we live in an era where we can taunt giant people IRL without any consequences.”

But since Okafor is involved, there’s a need to say what this all means.

It means the Philadelphia 76ers, Sam Hinkie and his vaunted Process have failed miserably, by drafting another troublesome rookie to pair with Joel Embiid, himself the subject of much criticism last year (never mind the fact that Nerlens Noel seems to be a pretty decent guy and that the Sixers also drafted K.J. McDaniels, who ran a pitbull rescue in college).

It means they screwed up by not placing veterans around their young players to ensure they don’t get into situations like these (Could a veteran presence have prevented this incident? Maybe, but human beings of normal size are already hard to hold back when pumped full of adrenaline – Okafor is 6’11 and 270 pounds).

It means Something, it must, beyond just “this is a very stupid, very idiotic, very dangerous, very 19-year-old-thing to do.”

It’s a problem we run into with sports sometimes: everything has to mean something, even though sometimes a pass is just a pass, not a representation of a player’s fear of taking the big shot. The blame for this goes all around, from fans to pundits to even writers. We want and need story within the sport, because without the story, sports are merely bland, repetitive actions. But there’s just not much here besides a destructive decision from a 19-year-old. That’s it. Even his coach thinks so.

Brett Brown on Okafor: "I’m looking at a 19-year-old kid that has all of a sudden come upon money and has been used to winning."

The moment the Sixers drafted Okafor – hell, even before that, when he was starring at Duke – he was saddled with the burden placed upon all young professional athletes. They are, for some reason, expected to act older than their age, to not make the same mistakes someone their age who isn’t making millions of dollars to play a children’s game. Perhaps this has to do with the incessant need to view athletes as role models, as if their prowess on the court or field infers a superior humanity. By the way, did you hear the one about Alex Rodriguez taking steroids or Ray Rice beating his wife or Adrian Peterson abusing his child?

Okafor lives in the public spotlight. He has to know that wherever he goes, if there is even the possibility of an incident occurring, it will be captured and shared for all to see. There’s no need for confirmed reports and no time for covering things up. The fall guy may have been the go-to move in Cris Carter’s days, but he never had to deal with YouTube, or Vine, or Periscope, broadcasting live from the street while this giant dude beats up another, less giant dude. So Okafor has no chance but to learn from his horrible mistakes, because if he doesn’t, we’ll know about it, almost instantly.

To wave this off as merely the folly youth would be to rob Okafor of his agency and responsibility. But youth does play a part – a large one.

We are all prone to mistakes of varying degrees, especially when we’re young. Sometimes we say something hurtful, other times we do something literally hurtful. What marks us as humans is what happens after we make those mistakes – if we repeat them, if we learn from them, if they change us for the worse or better. For Okafor, what he does next matters as much as what he did before. Probably more.