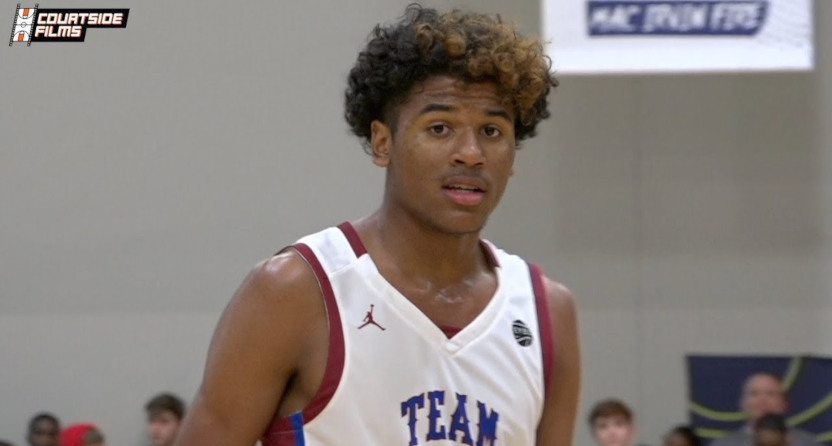 The NBA introduced a G League professional pathway in the fall of 2018, and that pathway will now include Jalen Green, ESPN’s top-ranked high school prospect from the class of 2020. ESPN’s Jonathan Givony wrote Thursday that Green, a Fresno, California native who won gold medals with USA Basketball at the FIBA U17 and U19 World Championship in 2018 and 2019, has chosen the G League over the NCAA (where he received interest from all sorts of top programs):

Jalen Green, the No. 1 prospect in the 2020 high school class, has started to inform college suitors that he plans to enter the NBA/G League’s professional pathway program, sources told ESPN on Thursday.

He has planned a formal announcement on social media at 1 p.m. ET.

The G League professional pathway was launched in October 2018 as a program that paid $125,000 to prospects as an alternative to college basketball. Green will be joining an enhanced version of that program, sources said.

Here’s a look at some of Green’s highlights from Nike’s EYBL last May:

The G League professional pathway idea has long made some sense, as heading to college isn’t the perfect solution for all players (especially if they’re intending to only play one year there before declaring for the NBA draft), but not all of those players want to go overseas (the previous other option, and one that’s definitely harder given the COVID-19 pandemic). And it’s starting to receive a lot of attention, and some notable names. Five-star recruit Isaiah Todd decommitted from Michigan earlier this week with the intent of turning pro, and 247’s Evan Daniels wrote Wednesday that while Todd’s destination isn’t confirmed yet, “the G League is expected to be a serious option.” (Update: Shams Charania of Stadium and The Athletic added that Todd is “expected to sign a G League deal” Thursday.) And Daniels added that the G League is looking like a more prominent option for many top players, especially now that they’re reportedly paying well beyond that $125,000 for top prospects:

While the NBA G League has yet to officially sign a high school prospect, the option is becoming more intriguing and potentially more lucrative to high school prospects, multiple industry sources have told 247Sports. When the G League announced their intentions of creating a program that would harbor prospects that opted out of college, the salary released to try and entice potential players was $125,000. Sources have indicated to 247Sports that the G League is now willing to pay more for the right prospects.

…When [RJ] Hampton opted for the NBL last year, some scoffed at the idea that the Next Stars program or the G League would routinely become legitimate options for high school prospects. The truth is going to college is valued less by high school athletes now more than ever. These are not only real, appealing alternatives they fit what the elite players want to do – get to the money and the pros as quickly as possible.

Update: Givony and Adrian Wojnarowski add that the G League pathway “will pay elite prospects $500,000-plus and provide a one-year development program outside of the minor-league’s traditional team structure.” So while Green is the most notable figure to choose this path so far, there may be many more to follow.