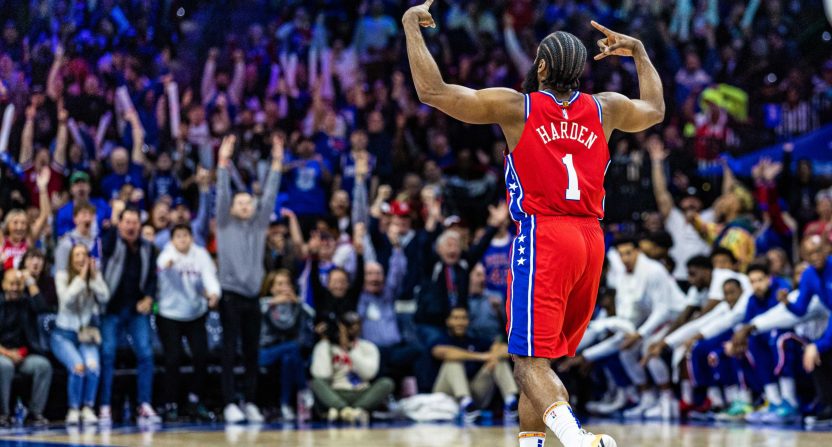 At a glance, James Harden declining his player option is bad news for the Philadelphia 76ers and their fans, particularly those who want him to stay. But in reality, Harden’s decision to do that might be the best news for Philadelphia.

Adrian Wojnarowski of ESPN reported that Harden is declining his $47.3 million option for the 2022-23 season. He also mentioned that this will give the 76ers more financial flexibility to improve the team.

The opt-out could go a long way in reshaping the Sixers’ bench, including that full mid-level exception, $4.1M bi-annual exception and sign-and-trades.

Can't overstate what a huge deal this is for the Sixers. Harden really helping the squad with this one. https://t.co/S863HNXhU4

When you say you want to win, but really mean it. https://t.co/42HPlBFrmv

This is where the 76ers can create the space needed to sign P.J. Tucker to a deal using the $10.5 million exception in free agency. https://t.co/FuYnL1nrNw

**James Harden** being the guy that takes less money to help teambuild is going to send The Narrative into unprecedented disarray. Skip Bayless in hell. Stephen A has vertigo. Windhorst sigh-complaining to squirrels https://t.co/IZPdBkD8Zi

There were, of course, others wondering if turning down that kind of money is a smart decision.

How do you turn down 47 million?? https://t.co/tcXZuwtOwL

I see what he’s doing but can guy imagine declining 47 million dollars for anything. It reads insane. 🤣 https://t.co/Fm49jIPRcB

While Harden is turning down a decent amount of money, he still figures to make a healthy bag for the upcoming season.

PHI using both the full mid-level and biannual exceptions on free agents would peg Harden's starting salary somewhere around $35M-$38M depending on exactly where apron falls/how much room PHI wants to preserve beneath, a couple of other small variables https://t.co/OUgbqlQKwD

There’s very little that Harden hasn’t accomplished. He was named one of the NBA’s 75th Anniversary Team, has made 10 All-Star Games, earned All-NBA honors seven times (with six of those being First-Team), won three scoring titles, an NBA MVP Award and an Olympic Gold Medal. One thing Harden has not done, though is win an NBA championship. This move was clearly made with that in mind.

If the 76ers can’t turn this into a championship, the move becomes a lot more questionable from Harden’s perspective. If, however, Philadelphia uses the extra money to add the additional pieces needed to get over the hump and win the franchise’s first championship since 1983, then we can safely assume that Harden will be happy with the decision.