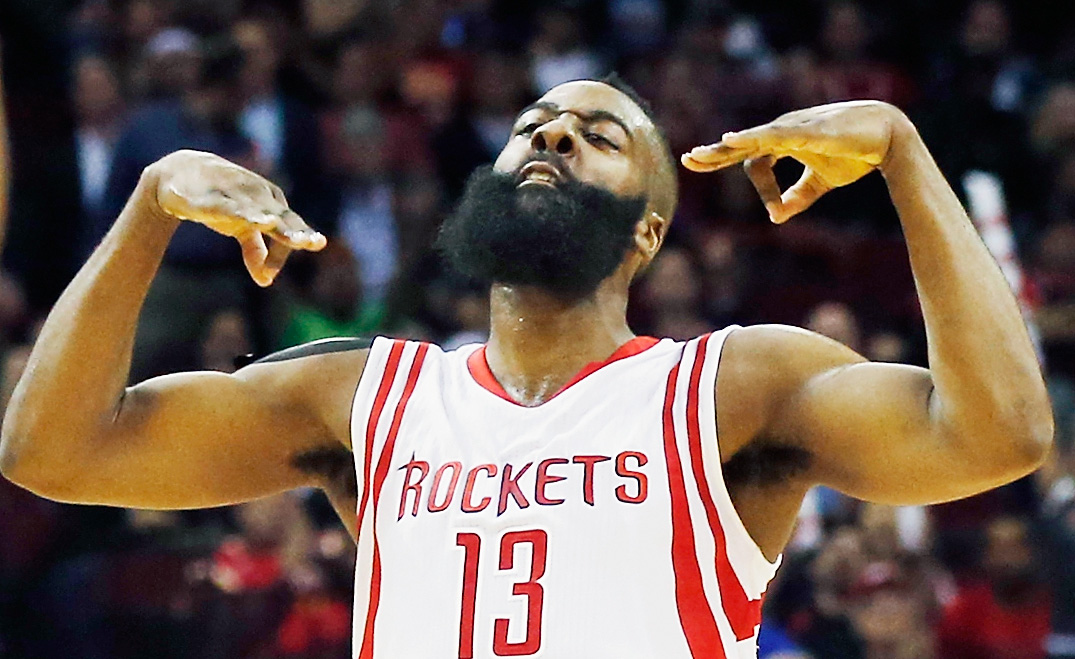 Point Harden is here, and he has not disappointed.

With one of those pesky traditional ball-handlers out of the way, Harden has taken the league by storm over the first two weeks of the regular season.

His 34-point, 17-assist, eight-rebound season opening statline against the Lakers was just a glimpse at what he could do when given full control of a fast-paced offense. Harden’s latest performance against Washington? Oh, just 32 points, 15 assists and six rebounds in 40 minutes, finally fully harnessing his amazing offensive capabilities.

Via Ghostface @teamziller: James Harden has *four* 30-15 games this season. There were three in the entire NBA last season.

Harden leads the league in assists per game, PER and win shares. Here are the other categories in which he ranks among the top 10 in the league (as of Nov. 7):

Right now, he’s one of the top two or three offensive players in the game statistically and is not only proving he’s a volume scorer over the season’s first six games — admittedly a small sample size — but is he’s playing efficiently as well, shooting over 50 percent from the field and over 40 percent from three. Harden’s attempted 115 field goals this season (as of Nov. 7), and his shot chart shows how he’s become the model for efficient shot-taking. 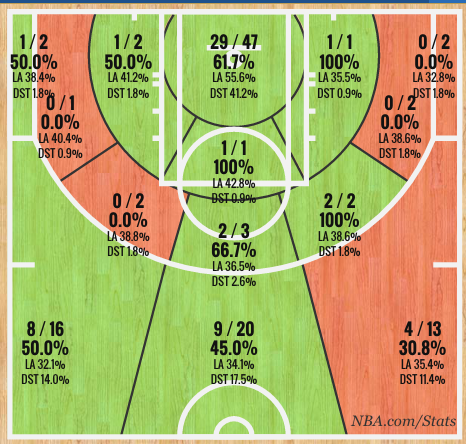 Over 41 percent of Harden’s attempts are in the restricted area right next to the rim, and he’s making 61.7 percent of his shots from there. Notice how he’s taken only 10 mid-range area shots this season, eschewing those areas for more efficient spots on the floor. He’s only taken four corner 3-pointers this season, hitting one of them, but he’s fared well from other 3-point areas aside from the right wing. Going back to the bigger picture here, Harden has a chance to do something no NBA player has accomplished in over 40 years. At 31.5 points and 12.3 assists per game, Harden has a chance to lead the league in both points and assists at season’s end. He’d be the first player to accomplish that feat since Hall of Famer Nate “Tiny” Archibald did it for the 1972-1973 Kansas City-Omaha Kings. And despite all of Harden’s incredible play on offense, the Rockets are only 3-3 to start the season. Not surprisingly, that falls on D’Antoni’s defense, or lack thereof. While the Houston offense is scoring a robust 108 points per game, it’s giving up 108.2, the 8th most in the league. The team’s defensive rating, or points allowed per 100 possessions, is 111.7, the third-worst mark in the NBA. Based on how the Rockets configured its roster to maximize Harden’s offensive genius, this is an expected outcome.

Ryan Anderson and Eric Gordon were signed from New Orleans as shooters who will knock down the plethora of open looks provided by Harden’s unmatched ability to drive and slither into the lane and attract double and triple teams, among other forms of defensive attention. It’s working; Anderson is shooting 41.7 percent from three, and Gordon is at a respectable 35.7. But they’re inability to defend is going to keep this Houston team in the bottom third in the league in that department all season.

And as long as Houston is one of the league’s worst defensive teams, they’ll probably hover around .500 all year long. And as long as the Rockets are around a .500 team, you could forget about placing Harden in the top three in the MVP race, even if he continues putting up these transcendental numbers.

Here’s a fact that many fans and pundits overlook when it comes to predicting the league most valuable player: No player has won the NBA MVP award from a team that didn’t finish the regular season as a top two seed in its respective conference since Michael Jordan won with the third-seeded Chicago Bulls in the 1987-1988 season. So it’s been nearly 30 years since a player from one of the league’s top four or five teams has won MVP. And unless Houston dramatically improves its defensive play over the coming months, Harden’s chances to win MVP will be next to nothing.

Harden has a chance to put up a historic season offensively, no question. But unless the Rockets become at least an average defensive team, Houston will probably sneak into the playoffs and get easily dispatched in the first round. Harden and the Rockets will be wildly entertaining this season, but will ultimately fall short of being a consistent winner.