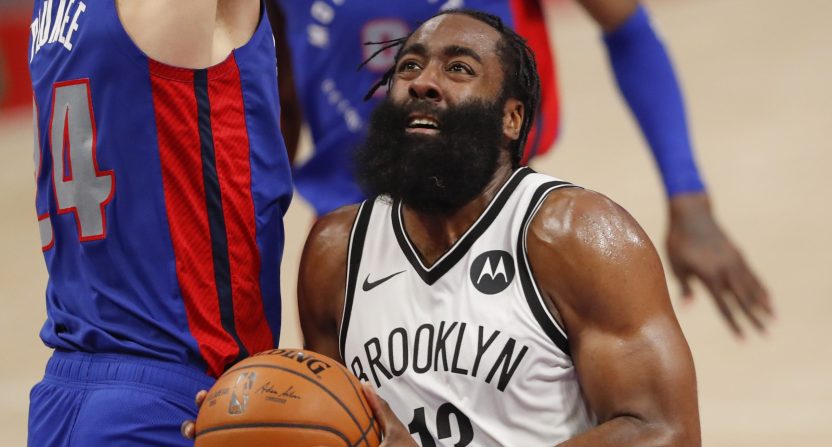 The end of James Harden’s tenure with the Houston Rockets was ugly as the NBA All-Star forced his way out of town via a trade to the Brooklyn Nets. At the time it seemed pretty cut and dry that Harden wanted out and wasn’t willing to commit to a future in town, even going as far as to say the Rockets “are just not good enough” and that he doesn’t think it “can be fixed.” The feeling felt mutual after a while with even the play-by-play announcer boasting, “Who needs James Harden?” after a preseason play.

One month since his trade to Brooklyn, Harden sat down with ESPN’s Rachel Nichols to talk about the entire saga and offer up something of an apology, though it’s one that comes with a few caveats about how he’s not really that sorry with where he ended up.

“I don’t like it at all because that’s not who I am,” Harden said when asked to reflect on the weeks leading up to the trade. “The drama, the extra whatever you want to call it, the negativity for me. I don’t really like negative energy. That’s draining. So I don’t like how it necessarily happened.

“I feel like it could have happened a lot smoother, a lot easier, but it is what it is.”

That’s actually a fairly honest assessment, though lacking in specifics. We’re sure Harden absolutely felt like it could have happened smoother and easier, but he also played a role in the lack of ease. Though to be fair, he clearly seemed to feel like he had to make a big stink in order to get Houston to act.

“Apologize for how it went down, but I guess I had to do what I had to do in order to get to where I wanted to go,” Harden said. “And credit to Houston, they didn’t necessarily have to trade me to Brooklyn. They could have traded me anywhere, but those are some stand-up guys over there. And it ended up the right way, but just didn’t like how that month or two played out.”

Apologize for how it went down” is a pretty great barely-apology apology. But as Harden says, he felt like he had to do what was necessary in order to end up in a situation that felt good. And the Rockets did oblige him eventually, sending him to a contender that he helped put over the top.

Was there a way that all of this could have occurred in a much more mature and friendly manner? Perhaps. But we all know that’s not how it usually happens with NBA superstars and the franchises that hold their contracts. Either one or both parties are going to make it personal or have strong demands, and that usually leads to some bad blood.

Maybe the point is that Harden didn’t actually need to apologize. We all just assumed it would probably end this way anyway.

James Harden sits down & opens up about his new role in Brooklyn, what he didn't like about his departure from Houston, and the Nets' championship chances: "We're more than confident that it's going to be difficult for a team to beat us four times in a best-of-seven series." pic.twitter.com/rZKkwFs1jg