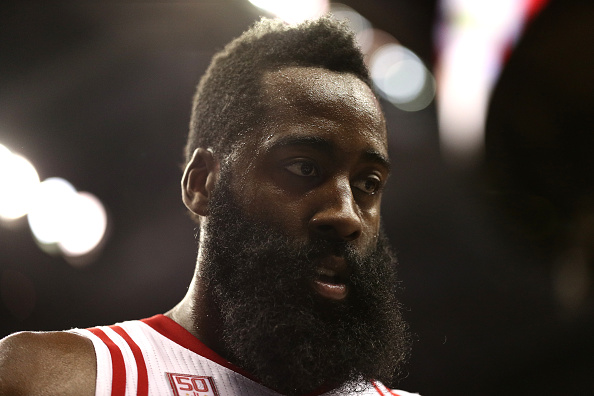 James Harden’s season was not supposed to end like this. At least not this dramatically.

In a two-man race for the MVP award all season, Harden was one of the best players in the league. He led the NBA in assists, the Houston Rockets had the third-best record in the league (55-27) and were the No. 3 seed in the West.

Harden’s sensationalism continued into the postseason, where he led the Rockets past his MVP competitor Russell Westbrook and the Oklahoma City Thunder in the first round. But then he and the Rockets ran into the San Antonio Spurs.

The series started out pretty well for the Rockets. Houston blew the Rockets out in Game 1 and, despite a blowout loss in Game 2, had played the Spurs fairly even. So much so that heading into Game 6 on Thursday, it seemed like Houston would be able to even up the series at three games apiece and force a Game 7. This idea was bolstered by the fact that Spurs All-Star Kawhi Leonard wasn’t going to play due to an ankle injury.

But Leonard not playing didn’t make a difference. Led by LaMarcus Aldridge, the Spurs just absolutely dominated the Rockets and ended Houston’s season with a blowout 114-75 victory.

Harden shouldered the blame for the loss, telling reporters afterwards that “everything falls on my shoulders.” And while he wasn’t solely the reason the Rockets lost, Harden was definitely a main cause Houston’s season ending as he simply had one of his worst games of the season. Undramatically, it was one of the worst games of Harden’s career.

Getting in foul trouble and turning the ball over, Harden just looked out of sync right from the start. He finished the game with only 10 points (tying a season-low) and six turnovers, and he fouled out in 37 minutes.

Harden also set a new season-low with a minus-28 rating and shooting a dismal 18.2 percent and 22.2 percent from three. The Rockets’ All-Star didn’t make a single shot from inside the three-point arc. He only made two shots all game, both of which were threes. And even more head scratching, Harden didn’t attempt a single shot in the first quarter, a very uncharacteristic move by one of the league’s best scorers.

This was the most un-Harden-like performance we’ve seen all season. His play was truly mystifying. Harden himself couldn’t put a finger on what led to his sub-par performance, only explaining to reporters that he couldn’t get into a rhythm.

All of this is just a strange way for Harden’s excellent season to end.

Averaging 29.1 points, 11.2 assists (which led the league) and 8.1 rebounds, Harden put up numbers during the regular season that only Oscar Robertson has ever averaged. He had fully embraced the switch to point guard and his overall game blossomed to yet another elite level under coach Mike D’Antoni. And even if he doesn’t win the MVP award, Harden’s reputation was rebuilt after a down year for the Rockets. Once again, he was considered a top player in the league.

Now that may all be lost. Recency basis will come into play and many will remember Harden’s inability to get the Rockets past a Spurs team that was missing Leonard and even Tony Parker, who is injured for the rest of the postseason. Plus, the Spurs didn’t just get past the Rockets. They absolutely beat them, winning Game 6 by a whopping 39 points.

The Spurs were clearly the better team in the series. But Harden should’ve been the best player on the court in Game 6. Unfortunately for him and the Rockets, that wasn’t the case. And now, Harden’s MVP-caliber season is over, leaving him with only questions that can’t be answered as he heads into the offseason.