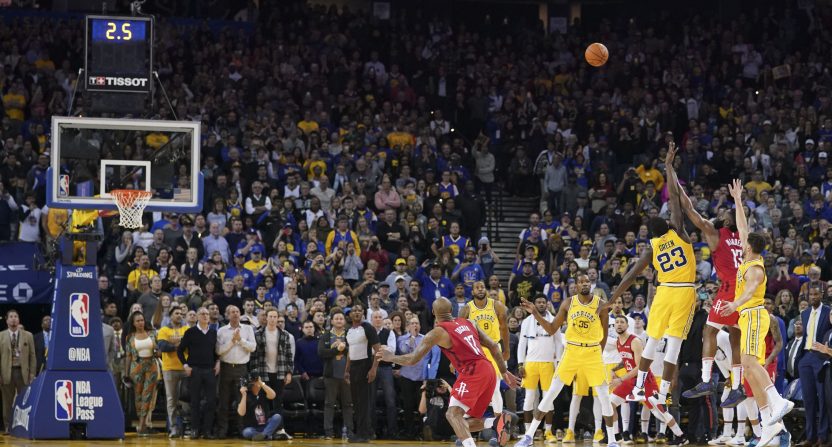 Thursday night’s Rockets-Warriors game in Oracle Arena will go down as one of the best games in the NBA this season.

Houston trailed by as many as 20 points in the third quarter, and found themselves down three in the final minute of regulation, when James Harden drilled this stepback three:

That sent the game to overtime, and Harden continued to dominate. Harden scored 10 of his 44 points in the extra period, and capped it off with this amazing go-ahead three-pointer to put Houston up 135-134 with one second left:

Eric Gordon said that game-winner was the toughest shot that he’s ever seen his teammate James Harden make.

Golden State had an opportunity to win it, but Kevin Durant missed this long three at the buzzer:

That sequence came after the officials totally whiffed on Durant being out of bounds on a possession the Warriors took the lead:

After a brutal start to the season, the Rockets are the NBA’s hottest team with a six-game winning streak and 11 wins over their last 12 games. This looks much more like the Houston team we saw last year, and this is despite Chris Paul being out due to injury since Dec. 20.