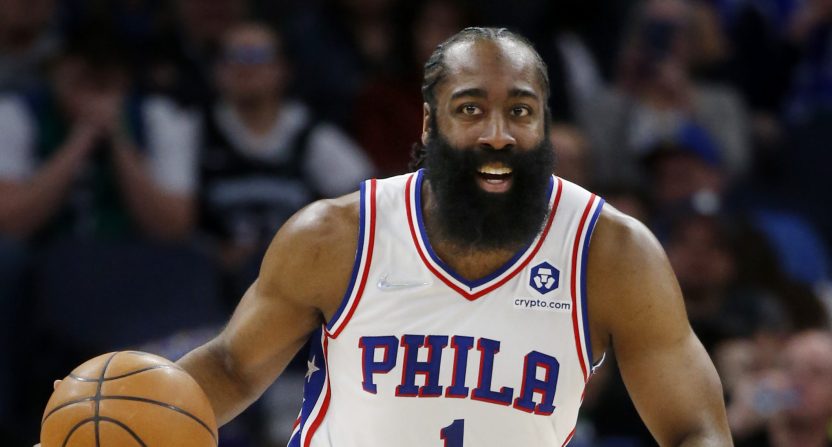 James Harden will not suit up for the Philadelphia 76ers anytime soon. The former NBA MVP is out of action for at least the next month after suffering a tendon injury in his right foot.

“James Harden has suffered a right foot tendon strain and is expected to miss a month,” ESPN tweeted on Thursday.

The injury comes at a tough time for the Sixers. They expected to be a major player this year, and still could be, but have gotten off to a sluggish start. The Sixers are 5-6 through their first 11 games of the 2022-23 NBA season. Harden had averaged 22.0 points, 10.0 assists, and 7.0 rebounds per game this season prior to suffering the injury. This while shooting 44.1 percent from the field.

Needless to say, this is a big blow to the Sixers. Over the next month, the team will face an array of difficult challengers in the NBA. The Phoenix Suns, Atlanta Hawks, Utah Jazz, Milwaukee Bucks, Cleveland Cavaliers, and Memphis Grizzlies are all on the schedule over the next month. All six of those teams are no worse than 4th place in the current standings in their respective conferences. Tough sledding lies ahead for the Sixers, who will now be undermanned for those matchups.

Reactions from the NBA world trickled in after the announcement of Harden’s injury, with varying levels of optimism:

James Harden is expected to be on the shelf for a month. I think the Sixers can navigate okay without him thanks to Maxey, but losing a month's worth of reps for a group that needs to keep building is a tough, tough blow: https://t.co/MNvSgrTQlq

I expect all of these storylines to come out of James Harden's missed time:

every team should announce all their bad news today https://t.co/alaRwoBocL