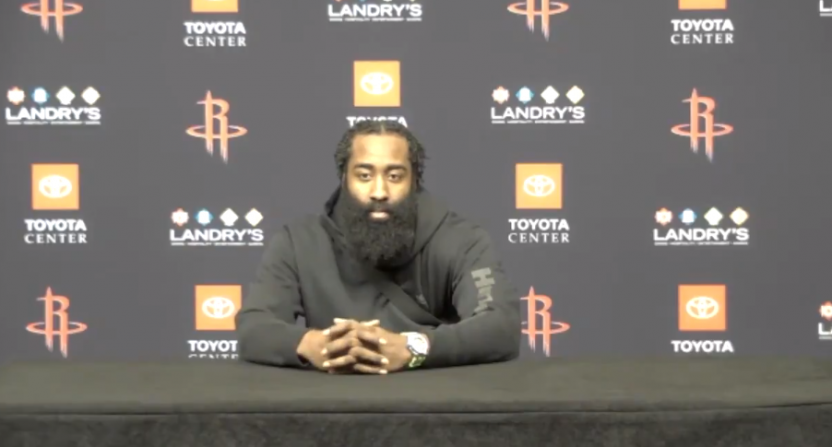 The Houston Rockets were blown out 117-100 by the Los Angeles Lakers on Tuesday night (with LeBron even shooting disrespectful threes), and in the postgame press conference, James Harden sounded quite hopeless about things working out in Houston.

Harden told the media that the Rockets “are just not good enough,” and said that the situation is “something that [he doesn’t] think can be fixed.”

James Harden says Rockets are "just not good enough … I love this city. I literally have done everything that I can. I mean, this situation is crazy. It’s something that I don’t think can be fixed."

Additionally, Harden said that the Rockets (3-6) are “not even close, honestly, to [the Lakers], and all the other elite teams out there.”

James Harden: "We're not even close, honestly, to that team, and all the other elite teams out there. You can tell the difference in these last two games." #Rockets

Here’s video of the final seconds of Harden’s press conference, which certainly seemed like a possible farewell as SportsRadio 610’s Adam Spolane tweeted:

This is how James Harden walked off the podium tonight. It sounded like a farewell pic.twitter.com/fnY2h6dnHP

John Wall — who the Rockets acquired in a trade with the Washington Wizards in exchange for Russell Westbrook in December — made this situation look even worse. According to Kelly Iko of The Athletic, Wall told the media after Tuesday night’s loss that the chemistry has been “rocky” and “[he doesn’t] think it’s been the best.”

Wall on developing chemistry with Harden: It’s been a little rocky. I don’t think it’s been the best, that’s all I can say.

Wall also said, “When you have certain guys that don’t want to buy in, it’s hard.”

Wall: When you have certain guys that don’t want to buy in, it’s hard.

It’s been no secret for months that Harden would like to be traded, and now it’s pretty clear that he really, really wants out of Houston. And it puts the Rockets in an ugly position.

Harden has looked rough lately, both in terms of his performance (shooting under 40% from the field in January) and his physical condition. He scored 16 points in Tuesday night’s loss, shooting 5-of-16 from the field (31.3%) and 1-of-6 on threes (16.7%). And before the game, an NBA TV studio host commented on Harden’s not so tip-top shape: “James Harden definitely had a pregame meal.”

And the rest of the league is very aware that he wants nothing to do with the Rockets any longer, which really hurts the trade leverage for Houston.

But this situation figures to get worse before it gets better the longer Harden remains in Houston. Don’t be surprised if there’s a trade made quickly. It’s surely a matter of when, not if, Harden is dealt.