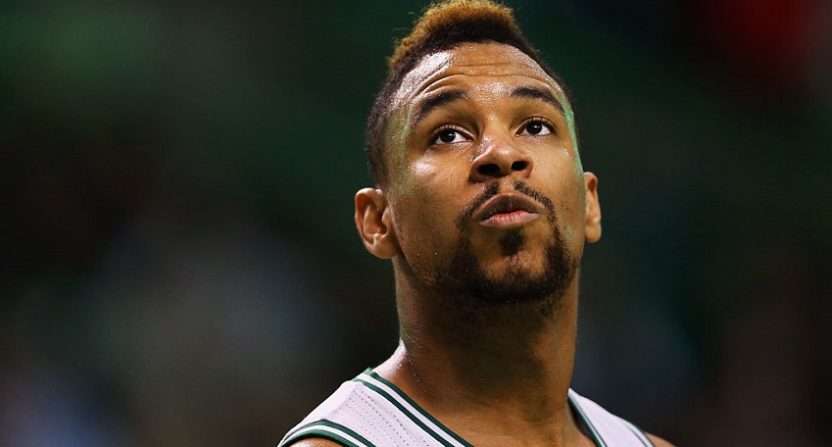 If you look at Jared Sullinger’s Twitter feed, you’ll find motivational posts on how to be mentally strong and how important a good work ethic is.

But life wasn’t always so bright and rosy for the former Celtics and Raptors forward. After starting 73 games for Boston in 2015-16, when he averaged more than 10 points and eight rebounds per game for a playoff team, he signed with Toronto last summer for the $5.6 million mid-level exception and broke his foot during the preseason, causing him to miss the first half of the season.

It's a constant battle WE ALL BATTLE!!! Let's be in this war together! pic.twitter.com/8EHrx7u6uh

“I lost a year of basketball directly because of what I have done — my weight and my eating habits,” Sullinger told the Columbus Dispatch.

Stints with the Raptors’ D-League (now G-League) team following rehab from the stress reaction led to Sullinger being traded to Phoenix as part of the P.J. Tucker deal. The Suns released him a day later.

In a revealing Q&A with The Comeback, Sullinger openly talked about the dark year in his life trying to rehab from his injury and his weight issues, and how he had what he termed a mental breakdown before he began to improve.

“I had a mental breakdown because, for the first time in my life, something didn’t work for me,” he admitted.

But Sullinger is now on the way back up. He told the Dispatch that he recently started a vegan diet and is trying to get back into ideal playing shape. He’s been playing for Scarlet & Gray, the Ohio State alumni team in The Basketball Tournament, which has reached next week’s semifinals in Baltimore, two wins from the team splitting $2 million.

Sullinger’s strong play has earned notice. He was reportedly scouted last weekend by Brooklyn Nets Assistant General Manager Trajan Langdon and rumors are swirling that he may sign for the year in China.

My guy @Jared_Sully0 is healthy and looking good!!! Somebody gotta pick him up

Following Scarlet & Gray’s quarterfinal win over Marquette’s alumni team on Sunday, Sullinger spoke with The Comeback on finding his path back to the NBA and finding himself as a person.

The entire Q&A is below:

Amazing. Amazing. It’s a lot of fun, man. You got all these alumni teams in here. You got Syracuse alumni, you got FOE, which is like Philly-affiliated. So we love it. We love everything about it, and we just enjoy battling against one another.

When did you get approached to be a part of Scarlet & Gray and play with some of your old teammates?

Well, the biggest thing was I didn’t have any offers. I was just sitting at home and was like, you know what, let me play. And it was probably the best decision I’ve made for me, like I’m finding myself as a whole, battling through all the injuries that I went through.

What do you mean by finding yourself?

Finding myself as a person, as a basketball player, everything, you know. Whether it’s me being with my mom or me shooting jump-shots. It’s finding yourself and understanding who you are. Once you find out who you are, you realize now you can have the self-discipline to understand.

Was there a point in your rehab process in Toronto or Boston where you felt kind of lost?

Yeah. I felt lost just because that was my first time missing the beginning of the season [with the Raptors] and I didn’t really gel well with the guys. And it’s not their fault, it’s partially my fault for getting hurt. Actually, all of it is my fault for getting hurt. All those guys already had a groove and they were trying to implement me, and it just didn’t work. It just didn’t work.

Once you have a groove… they played with each other from October all the way to January and then they throw me in. I’m just trying to figure out myself. Everything didn’t work. And then all of a sudden, I had a mental breakdown because for the first time in my life, something didn’t work for me. And I think that’s what changed me as a person.

What have you read that’s like brought you to a…

Nah, I can’t. That’s my mental advantage. I can’t give you everything.

Any NBA offers? Any European offers?