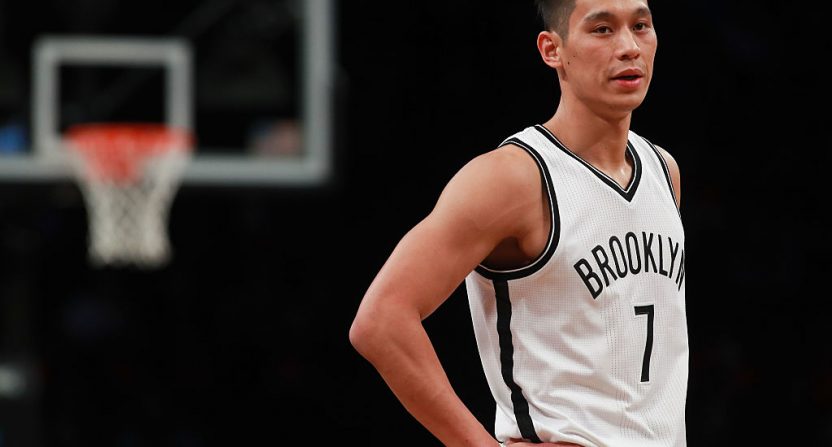 Jeremy Lin says the racist insults he heard while playing college basketball for Harvard were much more offensive than any insults he hears while on the road in the NBA. Not that racist insults hurled his way during an NBA game are to be taken lightly, but Lin thinks the comments dig deeper from college students looking to create an intimidating atmosphere.

In a story by Ohm Youngmisuk on ESPN.com, Lin recalls a handful of insults he encountered from opposing college basketball fans from student sections. Cornell fans left the nastiest impression on Lin, as he recalled in an interview on Randy Foye’s recent podcast.

“The worst was at Cornell, when I was being called a c—k. That’s when it happened. I don’t know … that game, I ended up playing terrible and getting a couple of charges and doing real out-of-character stuff. My teammate told my coaches [that] they were calling Jeremy a c—k the whole first half. I didn’t say anything, because when that stuff happens, I kind of just, I go and bottle up — where I go into turtle mode and don’t say anything and just internalize everything.”

It is demoralizing enough to know there are college students who feel stuff like this is acceptable and funny. It is even more alarming to hear students from universities like Georgetown and Yale getting away with it too. Lin says one student at Georgetown shouted “chicken and rice” and other signature Asian dishes at him during a game. A student in the stands at a game at Yale asked if Lin could even see the scoreboard with his eyes.

Awful. What’s worse is Lin even heard a coach dropping a slur during a game.

“In Vermont — I remember, because I had my hands up while the Vermont player was shooting free throws — their coach was like, ‘Hey ref! You can’t let that Oriental do that!’ I was like, What is going on here? I have been called a c—k by players in front of the refs; the refs heard it, because they were yelling it, [like,] ‘Yeah, get that out, c—k!’ And the ref heard it, looked at both of us and didn’t do anything.

“It’s crazy. My teammate started yelling at the ref, ‘You just heard it, it was impossible for you not to hear that. How could you not do something?’ And the ref just pretended like nothing happened. That was when I was like, Yo, this [kind of racism and prejudice] is a beast. So, when I got to the NBA, I thought this is going to be way worse. But it is way better. Everybody is way more under control.”

Lin admitted to previously letting those insults drag his play down at times, but he has been able to play through it without raising the issue. While it is commendable Lin never allowed crap like that to bring him down on his way to a career in the NBA, that doesn’t mean it is OK or should be acceptable and expected. Insults and trash talking is one thing, but there is a fine line between being intimidating as a sports fan and a jackass. Never cross that line.

Lin says he still hears an occasional derogatory comment here and there in the NBA, but the overall nastiness is toned down compared to what he experienced in college. This proves once again that sports fans can be among the worst human beings there are, and college students are the absolute worst sometimes.