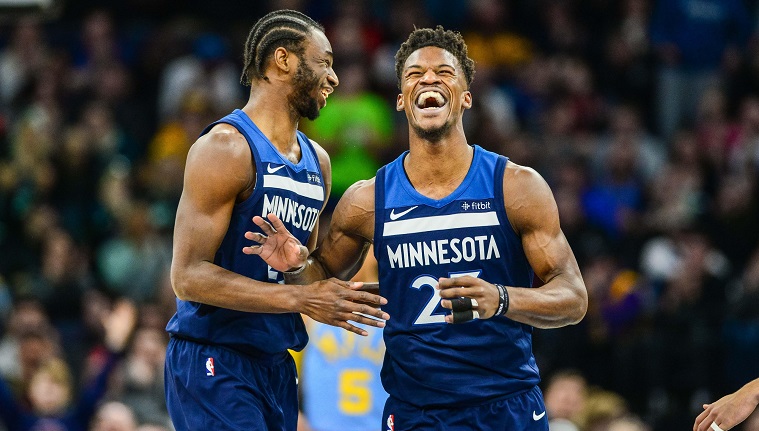 Jimmy Butler is the franchise leader that the Minnesota Timberwolves have lacked and needed since they traded Kevin Garnett to Boston.

Minnesota hasn’t made the playoffs since KG’s MVP season of 2003-04, a 14-year drought that will likely end now that the Wolves have a veteran presence like Butler, who’s not only playing at a near-MVP level right now but is teaching Minny’s younger players how to win after so many cold, empty winters in the Twin Cities.

That culture is what was missing with this team. Minnesota started to finally acquire playoff-quality talent like Karl-Anthony Towns and Andrew Wiggins, but Thibodeau stressed that the leadership Butler is showing and the habits he’s conveying to his younger teammates has been invaluable.

“The things that he does every day to help our young guys see how important everything is,” Thibodeau said.

For Butler, leadership is about winning above all else, and showing this team how to do it.

“It’s a big step for me,” Butler said about his role as the team’s unquestioned leader, “and I gotta continue to get better at it. Win by any means, do whatever my team needs me to do.”

Butler wanted to be that guy in Chicago, but it never seemed like Bulls management was on board with it. Derrick Rose was the lead guy and when he fell out of favor with the team, Chicago wasn’t ready to make Butler their long-term, unquestioned franchise player. (The situation is much more complicated and nuanced than that, as ESPN’s Nick Friedell expertly wrote in October in the rise and fall of those Bulls teams). After a year of trying to be an in-between mediocre club with Butler, Dwyane Wade and Rajon Rondo acting as the “Three Alphas,” Chicago sent Butler to Thibodeau and Minnesota on draft night, a situation that finally made Butler the guy.

“He learned a lot from that Chicago situation, so I think he’s getting better with it,” longtime Bulls teammates and now-Wolves forward Taj Gibson told The Comeback.

Thibs agreed, saying the area he’s improved the most has been in his leadership abilities.

“I wasn’t around him the past two years, and just seeing how much he’s grown in that area,” Thibodeau said.

That leadership extends to the locker room and the community.

“He’s got an incredible voice in the locker room,” said Minnesota big man Cole Aldrich. “People listen to him and he’s fun and charismatic.”

His work in the community, Aldrich said, includes bringing kids to games, taking them Christmas shopping and other charitable acts that people don’t even know about.

“He doesn’t do it for the notoriety. He just kinda does it just because that’s what he likes doing and it’s the right thing to do,” Aldrich said.

Veteran guard Jamal Crawford has observed Butler’s game from afar until teaming up with him in Minnesota this season, and seeing him up close makes him believe that Butler should be an MVP candidate as one of the game’s premier two-way players.

“Jimmy’s unbelievable,” Crawford told The Comeback. “The thing that makes Jimmy special is that he doesn’t play with an agenda, at all. He just plays to win.”

One of Butler’s nicknames is Jimmy G. Buckets, but Crawford said that his game is way beyond that.

“Like his scoring is special, but it’s not that,” Crawford said. “He makes everybody better. He’ll guard the best player. He’ll make the right play. He’ll play pick-and-roll. He’ll play point guard. So it’s so many other things that go into it.”

For Minnesota, currently 24-15 and fourth in the West going into their big showdown in Boston Friday night, Butler has been nothing short of phenomenal since the beginning of December. Since Dec. 1, he’s averaged 26.8 points on over 50 percent shooting from the field to go with more than five rebounds and five assists per game.

“The level he’s been playing the last handful of weeks is up there with the best in the league,” Aldrich said.

That stretch has elevated Butler to fourth among all NBA players in offensive win shares, eighth in total win shares and eighth in ESPN’s Real Plus-Minus metric.

“I don’t care about any of that,” Butler said. “If we don’t do our job as a whole here and win games, all the points, all that other nonsense, it really doesn’t matter.”

Crawford and Thibodeau both talked about Butler’s work ethic and how he prepares for games as much as he talked about what he brings on the court.

“There’s so much more that goes into it than just actual stats,” Crawford said.

But there are some stats that are currently preventing Minnesota from being considered one of the West’s elite teams, rather than being a fringe contender. That starts with defense, where the Wolves are 22nd in points allowed per 100 possessions, dead last in opponents’ field goal percentage and allow the fourth-most assists per game in the league (though they force 16.2 turnovers per game, second in the league).

Their issues extend to the 3-point line. In a league more dependent on the three each year, Minnesota makes just 7.9 treys per game, the second-fewest in the league, while giving up 10.7 per game, which is 22nd.

That 3-point disparity was magnified in Wednesday’s 98-97 loss in Brooklyn. The Nets, who take the second-most threes in the league behind Houston, were 14-of-30 from downtown for the game. Minnesota? A limp 1-of-11 from distance.

Despite a 42-3 disadvantage in points scored off threes, Minnesota had a chance to win the game on its final possession, and there was no doubt who was getting the ball. Butler took a pass and dribbled to the right wing, where his pull-up jumper from the right wing fell short. But in the Minnesota locker room after the game, nobody had any second-thoughts about the shot Butler took.

“I’ve seen him make that pull-up a million times,” Thibodeau said. “So I trust him in those situations.”

“We got the ball in the man’s hands that we wanted,” he said.

After starting the season 13-9, Minnesota is 11-6 — getting better — since Butler started tearing things up on Dec. 1. But all Butler wanted to talk about after the game is how the Wolves are an unacceptable 1-1 in January.

“You keep talking about what it was, [but] actually that shit was last year,” Butler said. “I don’t remember what happened last year.”

This year, Minnesota will be challenged with tough games right away. Over the next three weeks, the Wolves will make trips to Boston, Houston, Portland and Golden State and have home games against Cleveland, Oklahoma City and Toronto. So Butler will be asked, perhaps for the first time in his career, to be the undoubted leader of a semi-contender through a very difficult stretch.

Veteran teammates like Crawford believe that Butler will rise to the occasion.

“I think you’ll see that as we close the season and get in the playoffs,” Crawford said. “That leadership will come through.”

For Minnesota, the team is finally in place to end its long playoff drought. And Jimmy Butler’s leadership will make sure that the Wolves have a consistent winning culture for the first time since Kevin Garnett’s legendary prime.