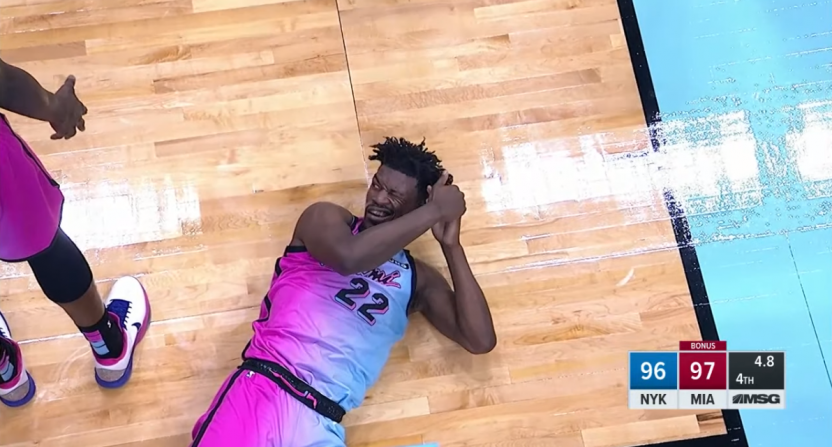 Jimmy Butler produced a hilarious moment in the final seconds of the Miami Heat’s 98-96 win over the New York Knicks.

New York trailed 97-96 in the closing seconds, when Julius Randle missed a shot and a chaotic sequence followed. Both teams were wildly going after a loose ball, and Randle knocked over Butler. Randle was called for a foul.

It was a pretty basic loose-ball foul, but Butler rolled around the floor, seemingly in pain. Then it became quite clear that he was simply acting in an effort to get the foul ruled a flagrant. Butler paused his rolling around to take a peek at the refs, and then hopped right back up when he realized he wouldn’t get the foul changed to a flagrant.

After the game, Butler kept up the acting: “I thought I was concussed.”

Jimmy Butler to @TheJaxShow “I thought I was concussed” 😂😂😂 pic.twitter.com/Ln25RT7nRN

Butler is certainly more effective as a basketball player than an actor, and he played a huge part in Miami’s win. The five-time All-Star flirted with a triple-double, scoring 26 points (making 13-of-15 free-throws), dishing out 10 assists, and pulling down 8 rebounds, to go with a game-high plus/minus of +25 in 36 minutes.