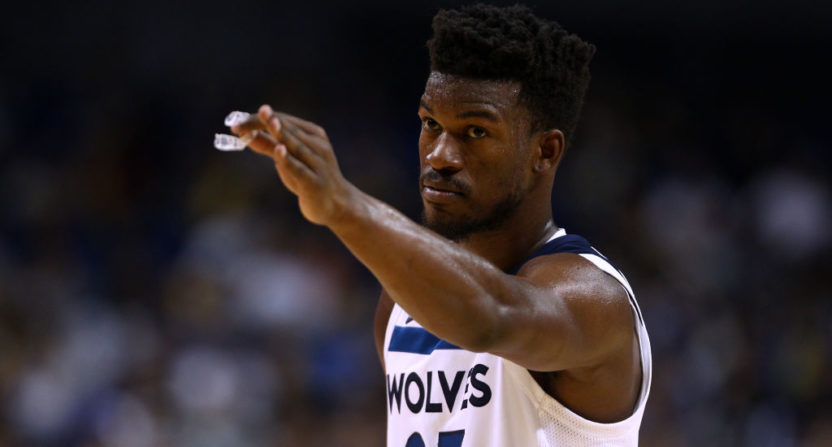 On June 22nd, 2017, the Chicago Bulls began their tanking ways and the Minnesota Timberwolves set themselves up for a path to a title when Chicago sent Jimmy Butler to the Land of 10,000 Lakes.

Butler has been outspoken about the trade and what his thoughts on the whole ordeal were. Back in June, the 28-year-old told The Chicago Sun-Times the following:

“I guess being called the face of an organization isn’t as good as I thought. We all see where being the so-called face of the Chicago Bulls got me. So let me be just a player for the Timberwolves, man. That’s all I want to do. I just want to be winning games, do what I can for my respective organization and let them realize what I’m trying to do.

“Whatever they want to call me . . . face . . . I don’t even want to get into that anymore. Whose team is it? All that means nothing. You know what I’ve learned? Face of the team, eventually you’re going to see the back of his head as he’s leaving town, so no thanks.”

Later on when speaking with the Sun-Times, Butler detailed his relationship with Head Coach Fred Hoiberg.

“I have no bad things to say about Fred at all. Maybe we didn’t see eye-to-eye on some things and a few things could have been handled different at different times…” Butler said.

But oh how times have changed. ESPN’s Sam Alipour recently spent some time in the wilderness with Butler and the topic of Hoiberg came up.

Hoiberg played for the Chicago Bulls from 1999-2003 during his run as a shooting guard in the league. After he retired, Hoiberg went into coaching and was the Head Coach at Iowa State from 2010-2015. In 2015, Chicago hired him away and in his first two seasons, Hoiberg led the Bulls to an 83-81 record.

This season however, hasn’t gone Hoiberg’s way. The Bulls are 2-7 thus far, the second worst record in the Eastern Conference ahead of Atlanta (2-9) and the fourth worst record overall in terms of losses.

Despite the fact that Chicago hasn’t been competitive since Hoiberg landed in the Windy City, the Bulls seem content with him leading the way forward. In fact, that’s exactly why Butler thinks he no longer wear’s a Chicago uniform.

“Alipour: Why did the Bulls trade you?”

“Butler: I probably did a lot of things that they didn’t like — like maybe the way I would talk to my peers or coaches. People don’t work as hard as I do. They don’t expect the same things out of the game that I do. And I said from the beginning it was either gonna be me or the Fred Hoiberg route. And rightfully so, they took Fred. Good for them. But I got that game marked on my calendar. Feb. 9, baby — I’m back. Oh, man, they better hope I go 0-for-30, ’cause every basket I score, I’m looking over at the bench and I got something to say. But I’m so happy to be here. Sometimes you just gotta appreciate it, man.”

Well then, maybe there was some bad blood between Hoiberg and Butler. The next meeting between the two isn’t for a while. Minnesota will visit Chicago on February 9th and then just 15 days later on February 24th the Bulls will travel and face the Timberwolves on the road.

One can assume during both meetings, Butler will be playing with a bigger chip on his shoulder than he may play with during other games.

But this all doesn’t mean Hoiberg will be coaching with a little more enthusiasm either. When asked about Butler’s comments, Hoiberg was very professional and showed no signs of bad blood.

“I don’t think it had anything to do with one person or another,” the Bulls coach told reporters. “This was the direction chosen. We got some really good young pieces.”

“We miss Jimmy. He is an unbelievable player and has had a great impact on winning for Minnesota. And he will continue to do that. We always wish him the best.”

Well this is awkward. It’s pretty clear that Butler harbors some grudges towards the Bulls and Hoiberg, but whenever he wakes up and looks at the standings, he’s also probably thankful.

While the Bulls struggle in the basement of the East, the Timberwolves are sitting pretty at 7-3, the third best record in the West.