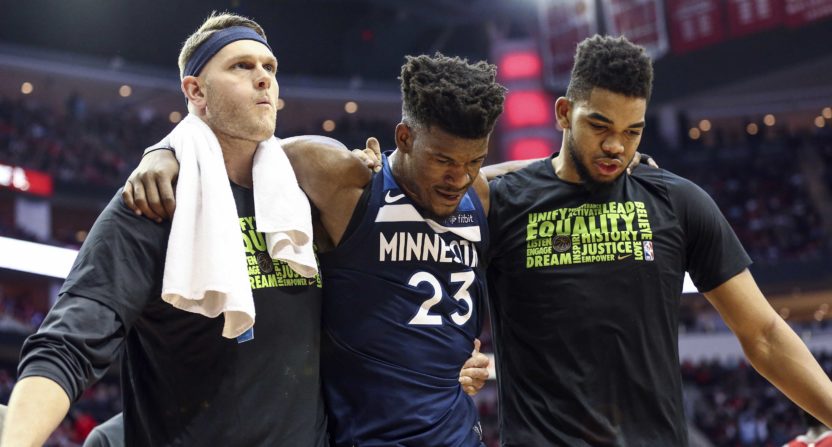 When Jimmy Butler went down Friday night with a non-contact knee injury, every Minnesota Timberwolves fan collectively gasped and cringed. In a season that has seen so many NBA stars miss time to injury, the Wolves’ All-Star appeared to be in some trouble.

But on Saturday evening, Minnesota supporters were given reason to exhale, when the Timberwolves announced that Butler had a “meniscal injury,” not an ACL tear.

Now, the Wolves’ announcement was purposefully vague. The team did not share the specific nature of the injury nor offer a timeline for Butler’s return. What’s clear, however, is that Butler (who averages 22.2 points, 5.4 rebounds and 5 assists per game) has avoided the worst-case scenario. Even if the forward misses some amount of time, he would seem to have a shot at returning in time for the playoffs.

Here was the injury that sidelined Butler on Friday:

Butler, for his part, seems to be taking things OK.

This has been a tough year to be an NBA star. Kawhi Leonard has barely played due to a quad issue. DeMarcus Cousins is out for the year with an achilles injury. Kristaps Porzingis will miss the rest of the season with an ACL tear. Chris Paul, Steph Curry, John Wall, Blake Griffin and Kevin Love have all missed time at all. Now we can add Butler to the list.

The Timberwolves are currently tied for third in the Western Conference, but their position remains somewhat precarious. In a packed Western Conference, Minnesota stands only 1.5 games ahead of the current No. 7 seed and three games ahead of the No. 9 seed. That means the Wolves, along with a host of other teams, are only one losing streak away from falling from a playoff spot. Even if that isn’t terribly likely, losing Butler could cost Minnesota some seeding, which could be the difference between playing the Nuggets in the first round and the Warriors.

In other words, the Timberwolves better hope Butler gets well soon.