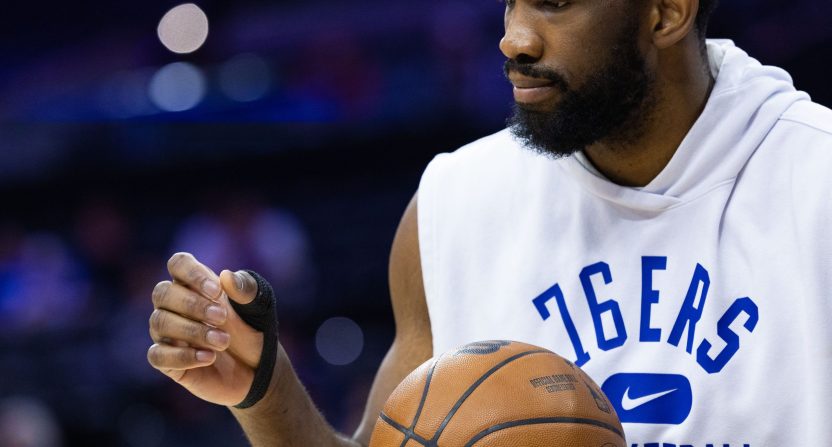 Philadelphia 76ers star big man Joel Embiid had surgery Monday to repair his sprained right thumb while also undergoing a separate procure to correct an issue with his left index finger, the team announced on Tuesday.

Embiid has torn a ligament in his thumb during the team’s first-round series against the Toronto Raptors, though he did not let that injury cause him to miss any games for the duration of their playoff run. He did miss the first two games of the Miami Heat series due to a fractured orbital bone and a concussion suffered in Game 6 against the Raptors.

It was expected that the 28-year-old would get surgery after the season. He remains expected to be ready to play for training camp, assuming he doesn’t make any bold decisions in the meantime.

It goes without saying that Embiid is the cornerstone of the Sixers roster. He finished second in MVP voting this season, leading the league in scoring with 30.6 points per game as well as grabbing 11.7 rebounds on average. He also averaged 23.6 points and 10.7 rebounds in the playoffs.

Embiid’s health and happiness will go a long way in determining whether or not Philly can get over the hump next season and get to the NBA Finals. In the meantime, news of the surgery garnered a lot of reactions around the NBA world.

The right orbital fracture that Embiid also suffered against the Raptors has not required surgery, I'm told, which lines up with the expectation Embiid expressed at his end-of-season press conference. https://t.co/TBrjbt0K8S

He had an issue with both hands & a broken face https://t.co/lPBlV0PwsQ

Dude is having additional procedures done that we didn't even know about. Playing with 8 fingers and a broken face https://t.co/xBDRXvjQWs

Joel Embiid laid it all on the line for the 76ers this season, another example of how much elite athletes are willing to sacrifice to play & compete. Glad to hear he’ll be fit for training camp https://t.co/xgREDinJKN

ah that end-of-year tradition where we discover all the unlisted injuries Jo had to play through https://t.co/cAwCulCPc1

Glad to hear Embiid got the procedure done. Respect to him for battling through the injury but clearly affected him in the postseason https://t.co/IHy841UykG