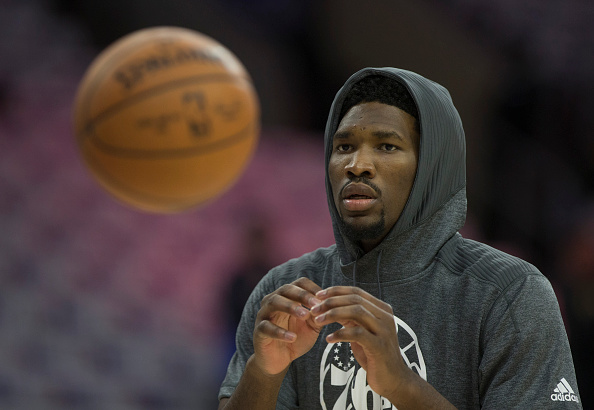 Averaging 18.9 points and 7.9 rebounds per game, Philadelphia 76ers center Joel Embiid is emerging as one of the most exciting young players in the NBA and could be in line for an All-Star Game bid — especially if the fans vote him to the Eastern Conference starting lineup.

Being voted to the All-Star Game as a rookie would mean Embiid has already earned the respect and admiration of NBA fans, along with providing a national showcase for him. The 22-year-old would also receive an opportunity to spend valuable time with some of the best players and coaches in the game.

But getting to play in the NBA All-Star Game would also give Embiid some affirmation that he’s been seeking for quite a while. Not from fans, coaches or media necessarily, but a famous crush of his that he smartly has not yet revealed.

This is the truth… I was trying to get with this famous girl and she said " Come back when you're a All Star" bruhh pic.twitter.com/CFBnRqnKMA

If that tweet isn’t made into a movie, then we should no longer have faith in Hollywood. Just look at the photo he chose. And who can’t relate to dealing with rejection on some level. We’ve all been there, other than perhaps the ridiculously good-looking and fortunate. But maybe Embiid’s crush wanted him to work a little bit for some attention and affection.

In the two years since he posted that endearing tweet, many fans have found it and rooted for the center to win the attention of his celebrity infatuation. Perhaps emboldened by that, along with his impressive play in the early part of the 2016-17 season, Embiid is seizing the opportunity to make the NBA All-Star balloting work for him. Sure, getting to participate in the game and its festivities in New Orleans would be fun and gratifying. But it would also qualify him as dating material under the supposedly strict criteria of his crush.

There is my chance to finally be with my CRUSH so i need your help y'all ha….. Joel Embiid #NBAVote https://t.co/lzxoKq2n10

Embiid even used the postgame interview after the Sixers’ 124-122 win at Denver on Friday to appeal for votes and the possibility of scoring a date with the woman he likes. Tweeting for All-Star votes is fun, but it’d be even better if he got him the date he wants so badly.

You could say that Embiid working to get healthy, develop into a NBA player and improve his game has all been a… Process. We just couldn’t have guessed that The Process was geared toward getting a date with his celebrity crush. Given his success thus far, the Sixers probably don’t have a problem with that. Whatever makes the kid produce on the court.

Embiid has been discreet about the target of his affections, which probably helps his cause. Although many believe that Rihanna is his famous celebrity crush. Wouldn’t getting Embiid a date with Rihanna be enough reason to vote him to the NBA All-Star Game? Get on this, America. You have two more weeks, as of this writing.