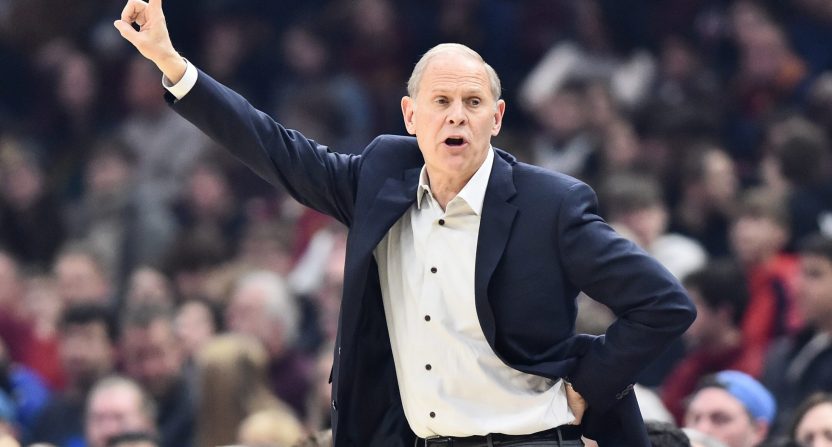 John Beilein was one of the most respected coaches in college basketball, turning programs like West Virginia and (especially) Michigan into top-15 mainstays and perennial Final Four hopefuls.

Then he took the Cavs job.

Cleveland has been a disaster on the court this year, though that was expected; it’s a full rebuild, and Beilein clearly knew that when he signed on. His style has apparently been more Celtics Rick Pitino than Celtics Brad Stevens, though, and there have been clear signs of discord. For example: Kevin Love’s recent, hilarious on-court display of dissent.

Kevin Love has absolutely had it with Collin Sexton 😳 pic.twitter.com/lib6gql0mx

That’s not the kind of thing you normally see, even from the most frustrated, trade-requesting players, and the vibes haven’t felt like what you want for a team designed to lose while developing players and highlighting trade assets. No one was going to care if Beilein lost games this season; the organization had different objectives, but those objectives weren’t exactly being met, from what the public could see.

After stunning players in a film session with a verbal suggestion that they were no longer playing “like a bunch of thugs,” Cavaliers coach John Beilein reached out individually to players tonight to insist he meant to use the word “slugs.” Story on ESPN: https://t.co/kqhRJ0qGjs

Beilein, in a film session, referred to his team as a “bunch of thugs”, which he says was an accident. Beilein says he meant to call them slugs, not thugs. Intended phrasing or no, that’s quite an unfortunate subconscious slip.

Beilein had been wrapping up what had been an off-day film session in Detroit and a hush fell over the room when his players and staff heard the words come out of his mouth, sources said.

The Cavaliers players left the room initially stunned and were increasingly disturbed as they dispersed out of the meeting, league sources said.

Cavaliers general manager Koby Altman was alerted to the issue in the aftermath of the meeting and reached out to Beilein for clarification later on Wednesday. Soon after, Beilein said he started to contact his players individually to clarify his words and meaning.

“I didn’t realize that I had said the word “thugs,” but my staff told me later I did and so I must have said it,” Beilein told ESPN on Wednesday night. “I meant to say slugs, as in slow moving. We weren’t playing hard before, and now we were playing harder. I meant it as a compliment. That’s what I was trying to say. I’ve already talked to eight of my players tonight, and they are telling me that they understand.”

According to Woj, Beilein understands the connotations involved with “thug”, and seems genuinely remorseful. Beilein had a fairly great reputation as a college coach, on and off the court. But when you’re already struggling to hold a locker room together, this kind of thing, accident or not, is not something you easily move on from. He’s going to have to handle this perfectly, and even that might not be enough.