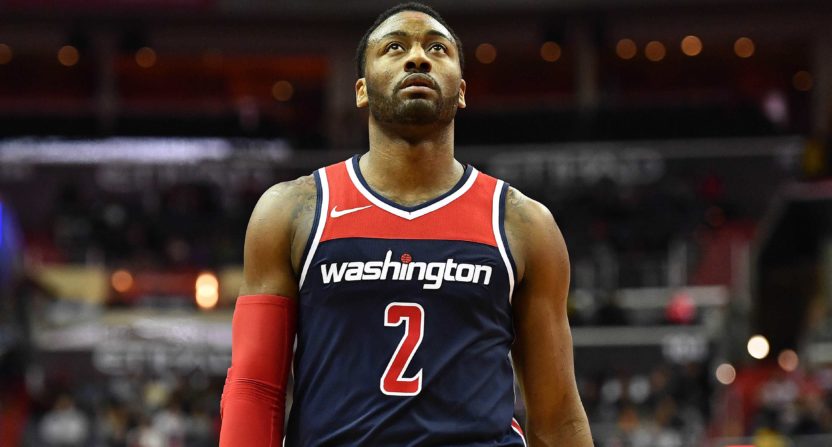 Even before receiving some very bad news Tuesday, the Wizards were in shaky position. Washington stands 27-22, tied for fifth in the Eastern Conference, only one loss from dropping to seventh. The team has lost six of its last nine games, amid charges of locker-room dysfunction and the appearance of lackluster effort.

So the news, reported by the Washington Post‘s Candace Bunker and ESPN’s Adrian Wojnarowski, that All-Star point guard John Will will miss 6-8 weeks after undergoing a knee procedure was not exactly what Washington needed right now.

DEVELOPING: John Wall will undergo a knee procedure tomorrow (described as a clean up). He will miss six weeks & will not play in upcoming All-Star weekend, The Washington Post has learned.
Story coming soon.

Though Wall is not having his best season, he remains the Wizards’ most important player, initiating their offense and creating open looks for Bradley Beal and the rest of his teammates. Even with Wall having a down year, Washington is 7.5 points per 100 possessions better with him on the floor (excluding garbage time), per Cleaning the Glass. When he sits, the Wizards score less, allow more, shoot less efficiently and turn the ball over with greater frequency. As ESPN points out, Washington plays like the Celtics with Wall on the floor and like the Knicks with him off it.

It’s not as if coach Scott Brooks has an under-the-radar stud to plug into Wall’s 34.3 minutes per game. The point guard’s playing time will flow mostly to Tim Frazier, a third-year reserve averaging 3.3 points and 3.6 assists. Beal will be forced to handle the ball more, and the Wizards will likely be stuck using clunky over-sized lineups. Washington will be figuring things out on the fly entering a five-week period that includes matchups with Oklahoma City, Toronto, Boston, Cleveland, Golden State and Toronto again. That could get ugly.

None of this would be so dire if Wall’s team were, say, three games better in the standings. But given the Wizards’ current place, they can’t much afford to slip up. With a 4.5-game cushion on ninth-seeded Detroit, it’s unlikely Washington falls out of the playoff picture entirely, but Wall’s injury could easily affect the Wizards’ seeding, which is massively important in a top-heavy conference. Win the No. 4 or 5 seed and get a highly winnable first-round playoff series. Slink to the No. 6, 7 or 8 seed and wind up facing one of the conference’s top tier. Wall’s injury could very well be the difference between meeting a team led by LeBron James in the first round or a team led by Goran Gragic.

After coming closer than ever to the Conference Finals last year, the Wizards have taken a step back and now find themselves a cut below the Eastern Conference’s elite. With Wall sidelined for so long, they risk sliding even further.