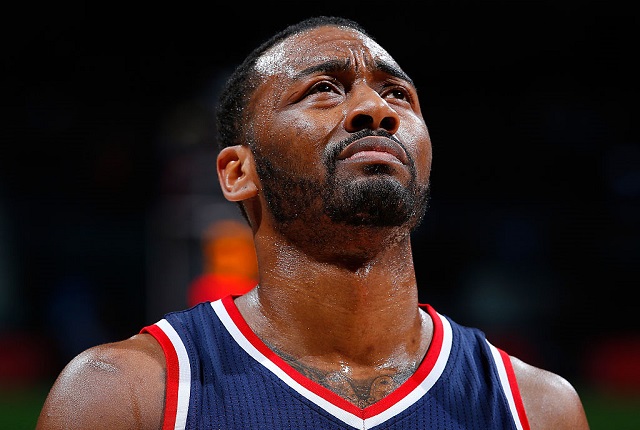 This was supposed to be the season when the Washington Wizards made a deep playoff run and played a faster, more aestethically pleasing offense with the long-term goal of attracting a certain D.C. native who will be a free agent this summer. Instead, Washington is headed for a .500 finish with no postseason play, missed expectations and plenty of change on the horizon.

Washington is 20th in the league in offensive efficiency, but that wasn’t the problem. It was No. 22 a season ago and reached the second round of the NBA playoffs. The defense declined big-time statistically, from fifth in points allowed per 100 possessions last year to 14th this year, with the 24th ranked field goal defense. After finishing 14th in 3-point field goal defense in 2014-2015, that’s down to 26th this year.

“The last two, three years before this, we were a great defensive team,” Wizards All-Star point guard John Wall told The Comeback. “This year, we fell off because we worried about our offense too much.”

“In general, we didn’t defend well,” said reserve forward Jared Dudley. “So we were playing a lot of half-court sets instead of getting in transition and getting easy baskets that way.”

Wall specifically mentioned the team’s bad job of protecting the paint this season, and he was dead on in his assessment. Washington allowed opponents to shoot 62.1 percent in the restricted area this season, per NBA.com, good for 23rd in the league.

After seeing what Golden State did last year, Washington realized that the NBA game is headed towards smaller lineups, more free-flowing offenses in transition, more threes and a faster pace. If the Wizards maintained its top-level defense, the thinking may have gone, they’d get a lot more easy baskets by playing faster.

So Nene was replaced in the starting lineup by Kris Humphries to shoot more threes and spread the floor. Dudley, Gary Neal and Alan Anderson were acquired to help the team’s 3-point shooting. Washington went from 27th in attempted threes per game to 14th this year, but its league rank in offensive efficiency barely rose.

The Wizards’ anticipated offensive renaissance didn’t go quite as planned. When you play poor defense, opponents score more, and your offense can’t get into transition, Dudley said. You’re forced into more half-court sets and you don’t get as many easy shots.

“With a guy like John, pushing the ball is our strength,” Dudley said. “When we’re not able to do that, it hurts us.”

Washington has succeeded in pushing the pace on offense this season. The Wizards average 98.3 possessions per 48 minutes this season, according to Basketball-Reference, which is the fifth-fastest pace in the league. That’s 4.6 more possessions per game than last year.

With Wall leading the break, Washington has had 1,649 transition possessions this season, per NBA.com, the second most in the league behind Sacramento. That equates to 18.9 percent of its offensive possessions, the highest frequency in the league. A big problem, however, was its inability to finish those transition plays with points.

“With the East being better, you can’t be inconsistent in this league,” backup wing Alan Anderson said. “That’s what we were and that’s why we’re not in the playoffs. In this league, the most consistent teams are the better teams and tend to go further.”

When given the opportunity to discuss what didn’t go as planned this season, head coach Randy Wittman quickly brushed the team’s past aside.

“This isn’t about looking back,” said Wittman. “We have an opportunity to get to .500. We’ll assess when the season’s over.”

Wittman sounded like a man defeated, someone who knew he could be fired as soon as Thursday, as one report suggested. That could be one of many changes for the disappointing Wizards this offseason.

In addition to a new head coach and possibly a new general manager, Washington has just over $45.5 million in committed salaries for next season. That doesn’t factor in a large contract extension likely coming for restricted free agent Bradley Beal, but with the salary cap expected to spike to over $90 million this summer, that leaves a lot of space for max contracts in addition to the core of Wall, Beal, forwards Otto Porter and Markieff Morris, and center Marcin Gortat.

“We have all the talent. We got every piece you can [have] for a championship team,” Anderson said. “We just have to believe in it, play harder and more consistently and play together more.”

Washington’s core is strong, but the team needs a style of play that works best with the personnel it has, which is something Wittman and Co. failed to achieve this season. With the correct offseason changes, the Wizards’ lost season will be a one-year anomaly rather than a grim harbinger of things to come.