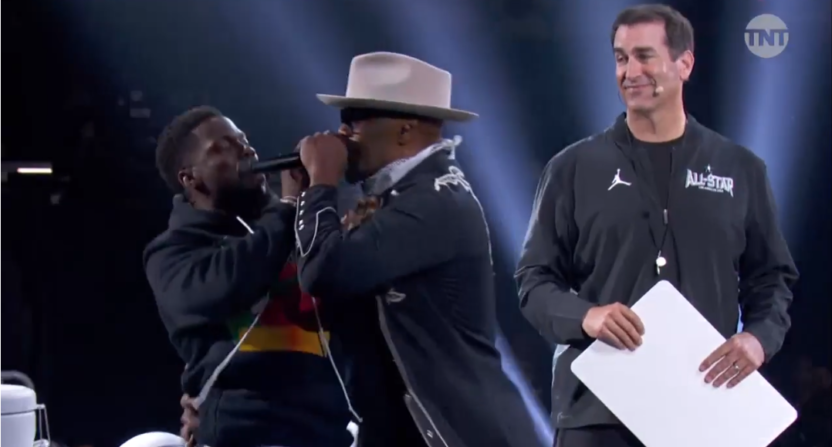 The 2018 NBA All-Star Game finally tipped off at 8:41 PM ET, after a stage performance and player introductions that took far too long.

The NBA — for some reason — clearly put a lot of effort and resources into the performance, which had celebrities such as Kevin Hart, Jamie Foxx, Rob Riggle, Adam Devine, Queen Latifah, and Ludacris involved. A couple of examples from the whatever the hell the performance was supposed to be:

That went on for about 15 minutes… and was followed by Hart doing player introductions for another dozen minutes. Nobody seemed to enjoy any of it, and just wanted to see the, you know, *All-Star Game*.

How has the NBA not figured out that literally not one person likes these intros?

So, we got an extended sketch before All-Star Game player introductions but couldn't get three dunks per contestant in the final round of the Slam Dunk Contest?

The NBA All-Star Game has a pace of introductions problem

people, we have empowered kevin hart for far too long.

Whoever created this pre-game show might want to get their LinkedIn updated.

Can someone please erase the first 35 minutes of the #NBAAllStar2018 broadcast from my brain. What the hell was that?

before the all-star introductions vs. after pic.twitter.com/u5VpMZBnlo

Us during these intros pic.twitter.com/7wgIOp8yvH

This NBA All-Star intro is longer than some Kardashian marriages.

Why are these intros so long?

Is the #NBAAllStar game tonight, or just the intros?

They really "tried it" with these intros, huh?? This is T-Painful……

The intros have sapped the competitiveness out of the players. It’ll be a regular All-Star game now

That was followed by the a Fergie performance of the National Anthem that wasn’t well-received either, and even drew laughter from Golden  State Warriors star Draymond Green.

we are all draymond green pic.twitter.com/ZkYtIGwLph

UPDATE: And here was Charles Barkley’s reaction to the Fergie performance.

Charles Barkley on Fergie's National Anthem: "I needed a cigarette after that." https://t.co/hHkTwOP5Qb