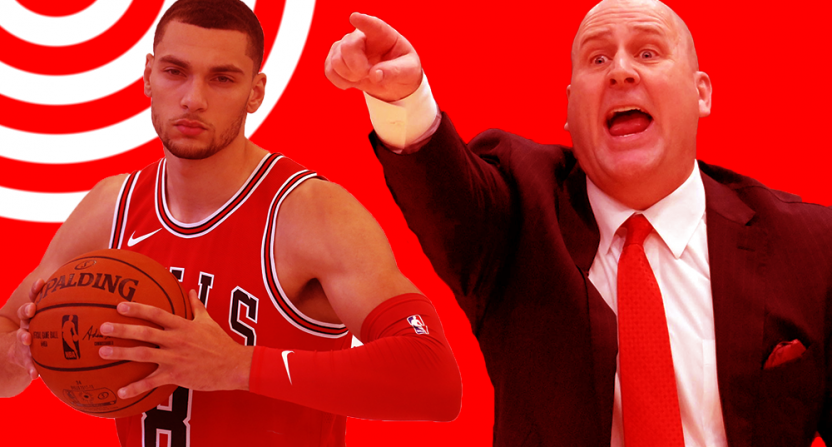 The Chicago Bulls had low expectations entering the 2018-19 season, and there is no questioning that. Featuring a roster with almost exclusively young talent and little direction, it was inevitable the team would struggle. Yet, somehow, the NBA-worst 7-25 Bulls has been even worse than anticipated. But how exactly have they fallen short of even that low bar?

Injuries have been a major reason for Chicago’s struggles this year. Even if the Bulls had stayed healthy all year, they only would have been a mediocre team, and that just hasn’t happened at all so far in the 2018-19 season. Point guard Kris Dunn has missed all but six games with a sprained left knee. 21-year-old power forward Lauri Markkanen, one of the Bulls’ few legit building blocks and a primary scorer, has missed all but nine games with an elbow injury. Power forward Bobby Portis is out with a sprained MCL in his right knee, and 2016 first-round pick Denzel Valentine is out for the season with an ankle injury and played in zero games before the injury. Speaking on injuries…

These injuries forced Chicago to give starts to the likes of point guards Ryan Arcidacono and Cameron Payne while also giving regular rotation minutes to Shaquille Harrison. These are guys who would register DNPs on any playoff squad, and are logging significant minutes this season in Chicago. The Bulls have featured lineups that D-League squads would be competitive against because of all their injuries this season.

Even when fully healthy, the Bulls aren’t good enough right now to compete in a weak Eastern Conference.

Markkanen oozes with potential and is the stretch forward most teams dream about having. However, the surrounding talent remains incredibly flawed. Guard Zach LaVine has filled up on buckets this year, and is averaging a career-high 23.8 points per game. But his defense is so stiff and bad that he gives up defensively what he makes on offense. For a player so athletically gifted, LaVine’s defense leaves a lot to be desired.

It doesn’t help Jabari Parker, the Bulls’ big free agent splash last summer, is just as bad on defense. Parker famously admitted “they don’t pay players to play defense” over the summer, an indication that he’s not too invested in improving his defensive game.

Jabari is all about getting buckets and you know what god bless https://t.co/kxlJIQySpK pic.twitter.com/wdoRUwraXz

Still just 23, the Bulls have benched Parker (who was doing a fine job scoring for them) and are searching for a trade partner for the power forward.

Offensively, even with LaVine and Parker (two guys averaging nearly 40 points per game combined), Chicago’s offense ranks at the bottom of the NBA. The Bulls rank dead last in the NBA, averaging just 100.9 points per game. Overall on the season, Chicago ranks 30th in the league with a 99.5 offensive net rating. The last team that finished below 100 for the season was the 2015-16 Philadelphia 76ers, who were intentionally created as one of the worst teams in the NBA. The Bulls’ offense should take a step forward with Markanen, Dunn, and Portis returning from injuries, but don’t expect it to be better than league average.

Finally, the off the court stuff is overshadowing any positives (as few of them as there are) on the court. The Bulls have only played 32 games, but they’ve experienced more than enough drama for a single season.

Following a 56 point loss to the Boston Celtics, which featured Boylen pulling starters with 21 minutes left to play, drama flared after players considered not showing up to practice over Boylen’s tactics in practice. Bulls players reportedly contacted the NBA Players Association over Boylen’s drills and called a players only meeting soon after, which was followed by a meeting between the players and the coaching staff. As Darnell Mayberry of The Athletic put it, the Bulls “narrowly avoided a full-blown mutiny.”

Chicago will be lucky to win 20 games over the full season. In the Eastern Conference, that’s pathetic. The Bulls weren’t built to win now, but no team with the kind of young talent that the Bulls have in the field should be this bad and not fun to watch. Besides getting healthy, there’s no immediate fix here. Fans in Chicago have probably experienced the team at its lowest this season, but that’s only because they can’t possibly get lower than they are now. The season can’t end soon enough for both Bulls players and fans.