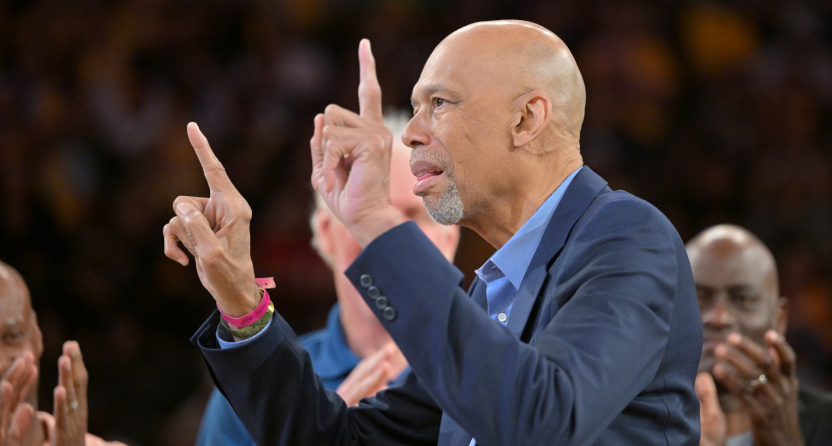 Hall of Fame center Kareem Abdul-Jabbar is one of the most opinionated players to ever grace a basketball court. And Brooklyn Nets point guard Kyrie Irving is one of the most controversial stars in today’s game. It only stands to reason that Abdul-Jabbar would have an opinion on Irving’s infamous anti-coronavirus vaccine takes.

Abdul-Jabbar (seen above when he was honored for his 75th birthday during a Los Angeles Lakers‘ home game in April)  took Irving to task on his Substack:

We might have just left him alone to stew in his own gelatinous ignorance. Rich and famous people get away with saying dumb things all the time because their money isolates them from consequences. They surround themselves with Yes-people whose job is to confirm whatever hare-brained ideas they have. Yes, sir, Mr. Irving, the Earth has never been flatter.

But now Irving is back and more destructive, insensitive, and just plain silly than before. He decided it would be a good idea to post a 2002 video clip from Infowars founder Alex Jones. Yeah, the guy who has been on trial for denying the Sandy Hook shootings and who previously admitted in open court that he’s a performer and his onscreen persona is just a character (that bilks millions of dollars from unaware viewers). The main gist of the clip is a warning about a cabal of international leaders who are secretly releasing plagues on the world from which they can profit. (Of course, we know who really profits from making this claim.)

Irving, also opinionated in his own right, has yet to respond. It’s safe to say, however, that Irving probably won’t be expecting a holiday card this year from the NBA’s all-time points leader.